Show Me The Monet. 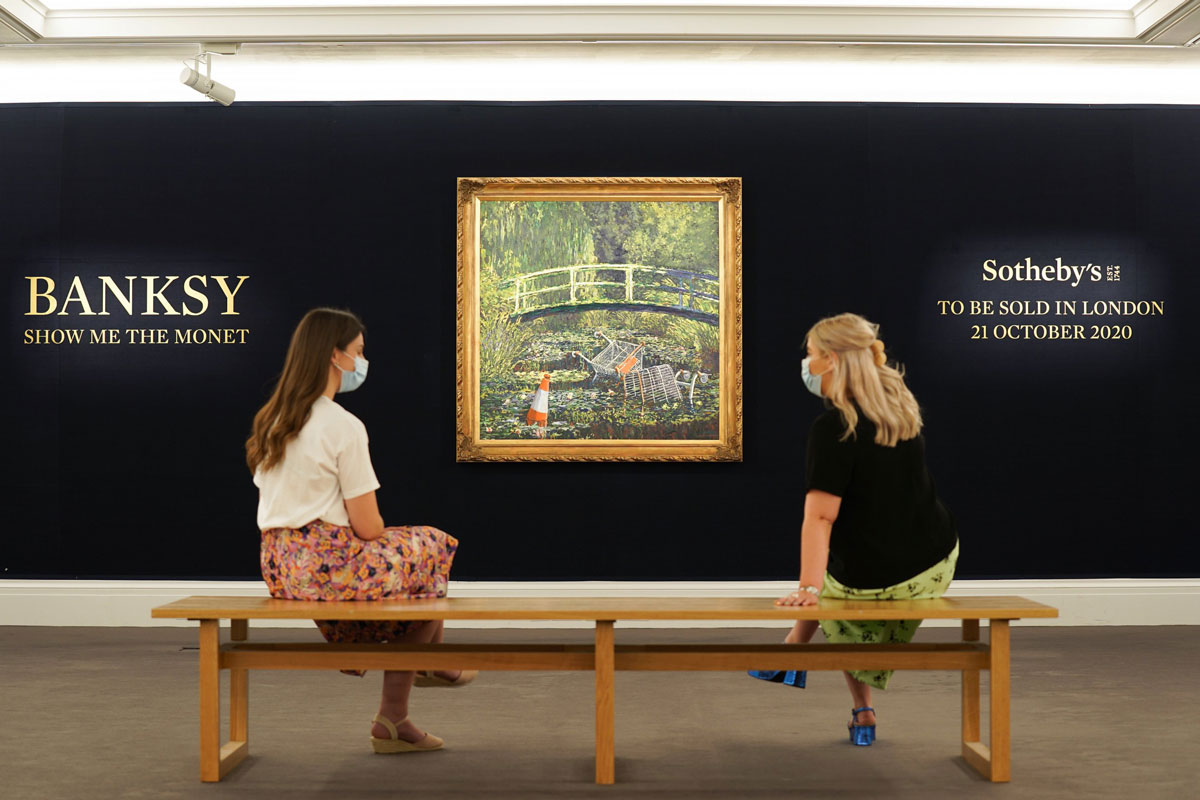 Enigmatic. Macabre. Political. Provocative. A lot of words are thrown around when trying to describe Banksy. For those in the dark, Banksy is a renowned, anonymous, England-based street artist, activist and film director.

Active since the 1990s Banksy’s satirical graffiti has brought him global fame. His dark humour, subversive messages and distinctive stencilling have also made him an anti-establishment icon.

Though Banksy’s works span everything from happiness and technology to slave labour, one of his favourite topics to skewer is consumerism.

Enter: ‘Show Me The Monet,’ a painting Banksy created as part of a crude oil series in 2005, which pays homage to Claude Monet’s 1988 The Water Lily Pond.

Sotheby’s London recently announced ‘Show Me The Monet’ will go under the hammer as part of their Contemporary Art Evening Auction on October the 21st, 2020. The painting is expected to fetch between $3.9 million and $6.5 million, My Modern Met reports.

The auction flies in the face, however, of a quote Banksy posted to Instagram in 2019.

“The price of a work of art is now part of its function, its new job is to sit on the wall and get more expensive. Instead of being the common property of humankind the way a book is, art becomes the particular property of somebody who can afford it. Suppose every worthwhile book in the world cost $1 million – imagine what a catastrophic effect on culture that would have.”

‘Show Me the Monet,’ which features Monet’s idyllic Giverny lily pond (with a couple of shopping trolleys and an orange traffic cone thrown in), is famous for highlighting Banksy’s dystopian view of society.

Alex Branczik, Sotheby’s European Head of Contemporary Art has said ‘Show Me The Monet’ “shines a light on society’s disregard for the environment in favor of the wasteful excesses of consumerism,” according to My Modern Met.

This begs the question: does its lavish (predicted) auction price undermine its message?

Not necessarily. In fact, “For the artworks ‘Show me the Monet’ Jerry Maguire-esk film riff to work, the Banksy needs to sell for a big money wedge,” one of Australia’s leading art dealers, Michael Reid (OAM) told DMARGE exclusively.

According to Mr Reid, “Selling the artwork for a good amount of money is central to Banksy’s multi-twisting inversion of popular culture, one that kicks received high culture up the ass.”

“Banksy puns the artist’s name; the artworks title; he takes a crack at the artist’s values within the art market and visually populates Monet’s tranquil, verdant, light dappled beauty with contemporary shopping centre trash. In terms of art history, Banksy’s artwork is a compelling multi-vehicle car crash, with limbs scattered across the highway.”

Its sale then doesn’t necessarily undermine its meaning, but add to it. As Mr Reid puts it: “People with limited financial resources secretly love to see rich people part with silly money to buy funny crap. The more ‘Show me the Money’ 2005 financially achieves at public auction, the deeper the artwork is cemented into our cultural landscape.”

“It’s even visually heavy handed, but it is not overly self-righteous or worthy. The visual tone balance is perfect.”

This leads into a broader debate around the key to a breakthrough piece of art, to which Mr Reid said: “Art speaks best, when the highly individual whispers to us all.”

As for the upcoming auction, My Modern Met reports “All eyes are sure to be on the Banksy painting” after his Devolved Parliament went up for sale last October, also at Sotheby’s, with a pre-auction estimate of $2.46 million.

“In the end, the painting was sold for a record-breaking $12.1, beating Banksy’s previous auction record by over $1 million. The art world’s eyes will certainly be watching to see if he can replicate that success [with Show Me The Monet].”

. Devolved Parliament I made this ten years ago. Bristol museum have just put it back on display to mark Brexit day. . “Laugh now, but one day no-one will be in charge.”