The acclaimed actor talks watches, wardrobe choices and what being a modern gentleman entails.

Few actors exude the same sort of charm that Benedict Cumberbatch does. The 44-year-old star of Sherlock, Doctor Strange and The Imitation Game – as well as countless other stage and screen marvels – is widely considered one of the most talented actors alive today, as well as the veritable model of an English gentleman: well-spoken, refined, and with impeccable taste.

Like any gentleman worth their salt, he has an interest in fine timepieces – so it’s no surprise that in 2018, he formalised a relationship with Jaeger-LeCoultre, one of the world’s finest watchmakers. Earlier this year during the height of COVID-19 restrictions, Cumberbatch produced a short film with the brand titled In A Breath to support the release of Jaeger-LeCoultre’s latest diver’s watch, the Polaris Mariner Memovox.

Filmed off Rakino Island in north-east New Zealand, Cumberbatch went freediving with the watch, drawing the parallels between his long-standing practice of meditation and diving – and the impact that both have on our sense of time.

DMARGE had the chance to chat with Cumberbatch; to pick his brain about the watch as well as what being a gentleman in 2020 means to him – and true to form, his definition was as considered and eloquent as a fine Swiss watch.

“Being a modern gentleman is about passing that platform onto other people,” Cumberbatch answered without a second thought.

“It’s beyond [just] style, stubble and a nice suit.”

It’s a valuable message for men in a year that’s seen so much social upheaval. Cumberbatch might be a celebrity but we all have a platform afforded to us, and we ought to use our privilege in a constructive way. You can like watches and fashion without compromising on your principles or having a zeal for social justice.

That’s not to say that Cumberbatch isn’t stylish – quite the opposite, really. He shared an insight into his personal style, which is largely unpretentious… Although he admits that he often likes to coordinate his outfit with his watch or watch strap.

“I like to dress down… Loose-fitting cotton trousers are a staple, [as is] Japanese denim and layering. I like vegan clothes, although I’m not a vegan through and through. Oh and underwear’s important – that’s a good starting point!” 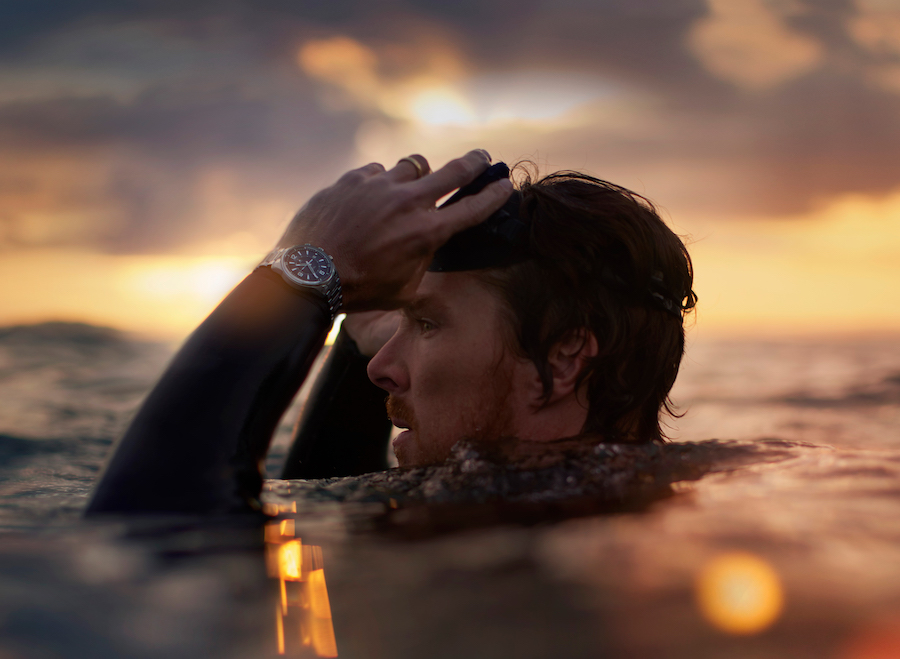 Cumberbatch in action with the new Polaris Mariner Memovox.

As charming to talk with as he is on screen, it was clear during the interview that Cumberbatch is a real watch fan, as he played with the new Polaris Mariner Memovox.

“My relationship [with Jaeger-LeCoultre] started when I wore one of their watches in Doctor Strange and blossomed from there.”

“They’re beautiful things but I’m not that materialistic… I didn’t want it to be just a ‘ribbon-cutting’ relationship. I wanted to learn how the watches were made, so I actually went to their atelier in Vallee de Joux, and had the chance to play around myself… It’s just the geek I am.”

It’s a fitting partnership. Just as Jaeger-LeCoultre makes thoughtful, exquisite timepieces, Cumberbatch is an insightful, refined sort of man – we only wish that slipping on a Polaris Mariner could make us half as cool as he is…