Tops off, masks on? 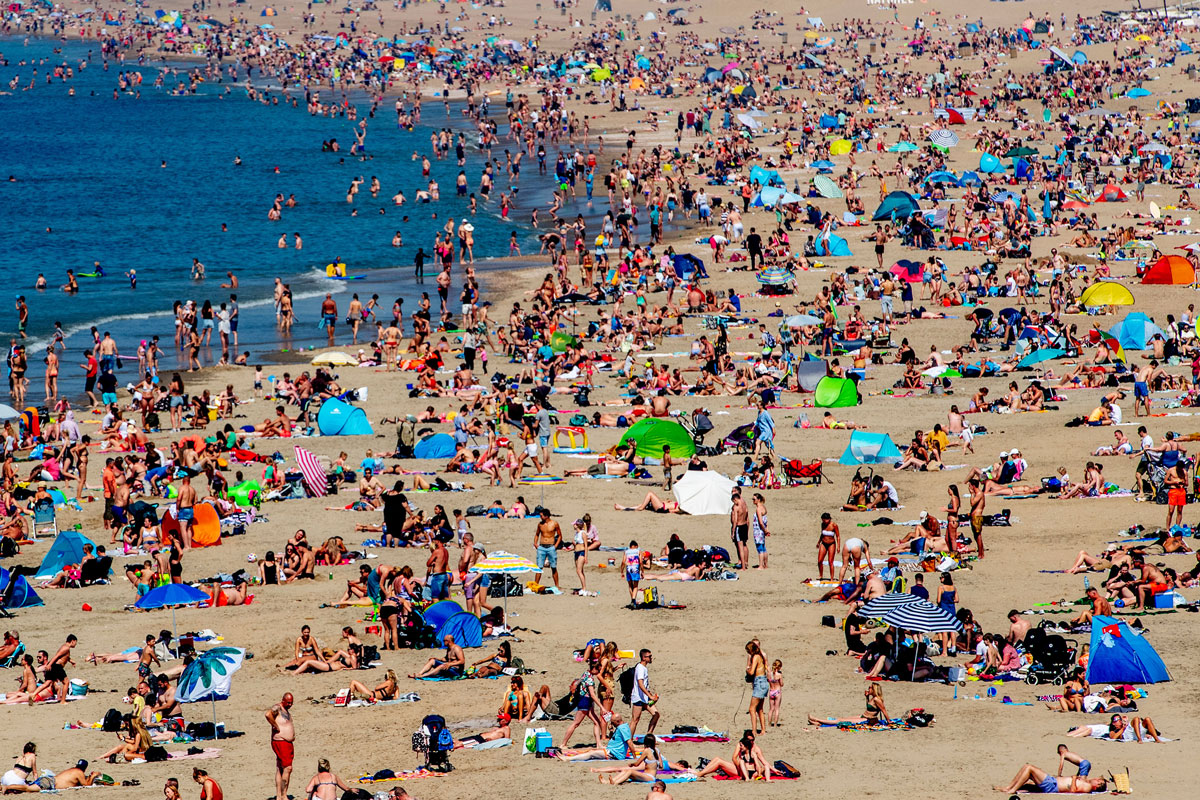 Like an influencer to a precariously photogenic clifftop, Europeans were this year drawn to the beach in spite of government warnings the pandemic was ongoing.

Perhaps not coincidentally, we are now seeing The Virus rear its ugly head again, everywhere from Spain to England.

As The New York Times reported yesterday, Europe, which once compared favorably to the United States in its handling of the pandemic, “is being engulfed by a second wave.”

“With an average of more than 100,000 new infections per day over the past week, Europe now accounts for about one-third of new cases reported worldwide.”

This comes after several European countries shrugged off their lockdowns and flung open their borders, engendering the sense people could return to normal (Czech nudists, for instance, were told they could keep their tops off but must keep their masks on).

Since then, “In the face of intense political pressures, European leaders have been reluctant to impose new, economically damaging lockdowns, often opting for the lightest possible measures,” The New York Times reports.

However, Spaniards’ summer sojourns and Britons’ beach bumbles may not have played such an elemental role in the resurgence of cases as you might think.

As The New York Times reports, “Public health experts have long warned that the virus could roar back when the days grew colder, driving people indoors, where the risk of transmission is far greater.”

Is it possible then, for those of us on the other side of the world now watching the thermometer go up, to enjoy summer? The answer is a yes – with caveats.

To help us do just that are a number of summer pandemic lessons we ought to learn from Europe. The first is that effective contact tracing and a clear roadmap for an impatient population are both crucial, if we want to avoid becoming an inpatient population…

Traveller illustrates this point with the case study of Spain: “On September 8, Spain notched up a new milestone when it became the first European country to record more than half a million coronavirus cases. With infection rates higher than France, the UK and every other European country, coronavirus tests have indicated positive for almost one in 10 of those tested.”

“Government officials have pointed the finger at the country’s youth who have been partying, socialising, celebrating with friends and families and disregarding rules around social distancing. Infections spread in the home are believed to be responsible for around 50 per cent of cases.”

“Spain’s response to the crisis has been piecemeal, with much of the fine detail left to regional jurisdictions. Track and trace procedures are neither uniform nor rigorous. When someone tests positive, authorities have difficulty tracing their contacts. Many parts of the country, such as Madrid, where cases have been rising rapidly, have been slow to reimpose lockdown measures such as limiting gatherings to a maximum of 10.”

“The lesson,” according to Traveller, is that “the leisure time and conviviality that come with summer holidays are the time when people are most likely to intermingle and ignore social distancing.” This means “effective contact tracing, a single set of coronavirus protocols that applies to a whole country, effective communication and a road map that gives the population a clear picture of what lies ahead” are essential.

RELATED: Iconic Photo ‘Reveals’ Why Sex Pilgrims Are Flocking To This Italian Island

Another point to note is that Spain’s surge in infection numbers has predominately been driven by younger people (in late March the average age of COVID-19 cases was 59; in mid-September, it was 38). This has been mirrored all over Europe.

The lesson from this is that social distancing, masks, testing and contact tracing should strictly apply – equally – to everyone – even those less vulnerable should they catch the virus.

Another lesson to take on board is not to let up lockdowns too quickly (something Australia doesn’t appear to be in any danger of). According to Italy’s health experts, Traveller relates, “the country’s relative success is due to the country’s rigorous lockdown, imposed earlier and for longer than in France and Spain.”

“Italy only relaxed its tight restrictions on September 20 to allow up to 1000 fans to attend sporting events. In France meanwhile, as many as 5000 people per venue are allowed in shows, cinemas and casinos and stadiums have been permitted to host the same number since July 11,” (Traveller).

RELATED: Iconic French Riviera Photo Reveals The Freedom Europeans Have No One Else Does

That said, there is also an argument that – to a small degree – there is an element of Europe’s bold (if not defiant) attitude we can learn from too. Purely economically speaking, providing the case numbers don’t rise so high as to overwhelm the hospital system (which would then screw the economy even worse), it would benefit Australia to ease restrictions as soon as it is safe to do so.

Mental health workers have warned of the consequences of the lockdown in Melbourne, urging officials to let up as soon as safely (and sensibly) possible. As the ABC reports, “When the Victorian Government locked down several public housing towers, Lifeline saw a 22 per cent increase in calls from the state.”

“When stage 4 restrictions were announced, the calls from Victorians jumped by 30 per cent.”

Finally, rigorous airport testing is another feature we’d be mad to stop doing, if countries like the UK in Europe’s experience is anything to go by.

Though travellers arriving at UK airports from overseas are required to self-isolate for two weeks (unless they are coming from a country on the exemption list), the UK government’s own scientific advisory group has reported that less than 20 per cent comply, Traveller reports.

“Coupled with the lack of airport testing, compliance breaches allow the virus to spread. It’s also been established that those who break the self-isolation protocols are unlikely to report those who they might have come into contact with in order to lessen the severity of the breach,” (Traveller).

Who knows, perhaps, despite our deepest suspicions, a heady beach club (with marked out social distancing) in Bondi is just what we need?