“Good on ya for keeping your composure.” 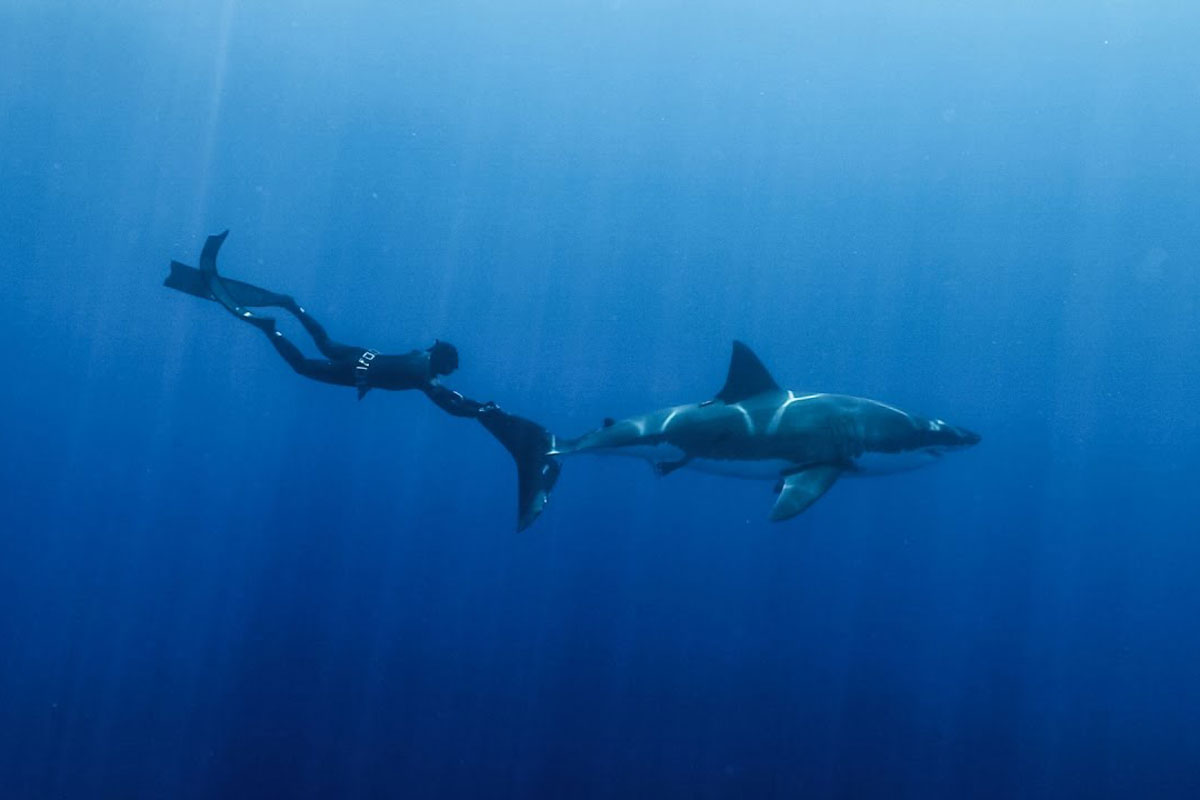 Image: Harbour House Life (not the encounter in question).

Backpackers. British climate refugees. Beach volleyball. Slacklines. Reggaeton. The Steyne. Manly – the touristy jewel of Sydney’s Northern beaches – is known for a lot of things, but The Great White Shark is not one of them.

However, one of these apex predators was recently spotted off Shelly Beach, a popular swimming, snorkelling and SCUBA diving spot around the corner from Manly.

The shark was caught on film by Jason Harris, who was spearfishing – not off Deadmans or Winki (spearfishing spots, a little further removed from Shelly Beach) but – “further to the right, just infront of where you can start fishing at Bower.”

In other words: right by where all the dive schools hang, surfer’s surf, etc.

The clip was filmed at 6:30am and shows Harris, spear in hand, boulders below.

23 seconds in, a 3m great white appears from the deeper water, cruising through behind a school of Kingfish.

Harris and his buddy dip their heads back in for another look, then the video cuts.

Far from swearing off spearfishing for life (as the less experienced among us might expect), Harris appears to have kept calm in the wake of the encounter.

“How many bricks were shat?” one Youtube user asked, to which Harris wrote: “Zero thankfully.”

Meanwhile, as comments like “Bro you are insane! You couldn’t get me in those waters!” rolled in, Harris appeared to have already turned the page, bemoaning the lost spearfishing opportunity.

“Mate I was spewing, so much activity with the kings and bait balls and then this creep decides to ruin the party in 4-5m green vis.”

“Great footage of your encounter! Good on ya for keeping your composure,” one user wrote on Instagram.

Others took the opportunity to criticise the reporting of the video, with comments like “Pitty [sic] the media made it out to be worse then what it was” cropping up on various occasions.

“So cool encounter mate!, but the news calling it life threatening behaviour from that White is just ridiculous aye.”

“Ohh her [the reporter’s] language is [hilarious]; looming from the dark.”

It’s wasn’t just the media that saw the gloomy side of the incident though, with one Youtube commenter expressing concerns for their mother, and another remarking on the shark activity in Sydney right now.

“My mother swims every morning Between Shelley and the point at Manly, saw 2 Grey Nurses earlier this morning. 2 Dorsal fins so pretty sure were Grey Nurses. Very Cool! A great white just below the carpark however is not cool at all. I worry when she goes off for those long swims with great whites spotted around the corner. Used to fish there all the time when I lived there (from the rock platform). Used to snorkel Shelley as well. Now I would think twice.”