Justin Bieber Spotted Wearing The Only Shoes Worse Than Crocs

Clogs in the machine.

We’ve said it before and we’ll say it again: Justin Bieber’s constantly-evolving wardrobe and personal style is an incredibly captivating thing to watch. Some days, he’ll step out in outfits that are so impeccably stylish that we’re surprised he doesn’t just give up music entirely and focus on modelling. Then, once our spirits are up and we’re full of style inspiration, he’ll debut some atrocious ensemble that’ll have us questioning our praise.

One of his most divisive fashion choices is his love of Crocs. First released to (or imposed on) the public almost two decades ago, Crocs might just have the most mixed reputation of any shoe ever made. Many people loathe Crocs, but as Bieber and other celebrities like Post Malone, Bad Bunny and Romeo Beckham have demonstrated, they can actually look good. If you’ve got the panache to pull them off, that is.

We’re slowly coming on board – but something that’s going to take us a bit more time to get used to are Bieber’s Yeezy clogs, which he was spotted wearing once again in Los Angeles yesterday. 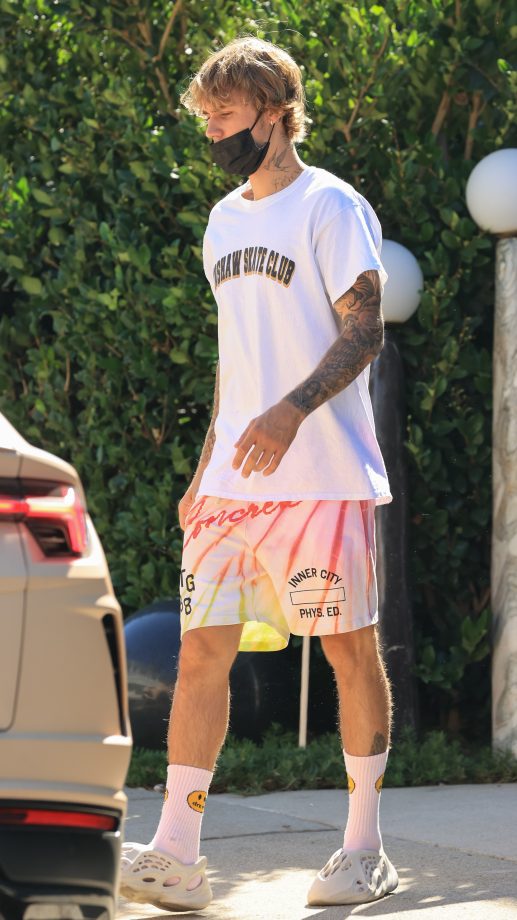 Officially called the Yeezy Foam RNNR, these wild-looking clogs are the brainchild of sportswear heavyweights Adidas and Kanye West, a close friend of Bieber’s. Justin and his wife Hailey made headlines when they made a visit to West’s Wyoming ranch during an apparent mental breakdown he suffered in July.

Made in the US out of a polymeric foam partially derived from algae, the Foam RNNR (or ‘Yeezy Clogs’ as they’re better know) have been part of West’s push to make his fashion releases more sustainable and to bring jobs back to the US. We wonder how that fits in with his presidential platform…

The Yeezy Clogs might be even more challenging to sartorially swallow than Crocs. At least Crocs are cheap: the Yeezy Clogs are currently fetching close to $1,000 on StockX. It’s a design that’s definitely not for everyone – but that’s Kanye’s raison d’être.

Bieber’s fashion label recently Drew House teamed with Crocs on a collaborative yellow pair of the eponymous clogs, which Bieber debuted in dramatic style just last week. They’ve already sold out, too. Maybe there’s something in this clogs thing.