“You make 30 thousand decisions a day – if you’re not clear on where you’re going or what you’re trying to avoid, every single one of those decisions will be much more stressful.” 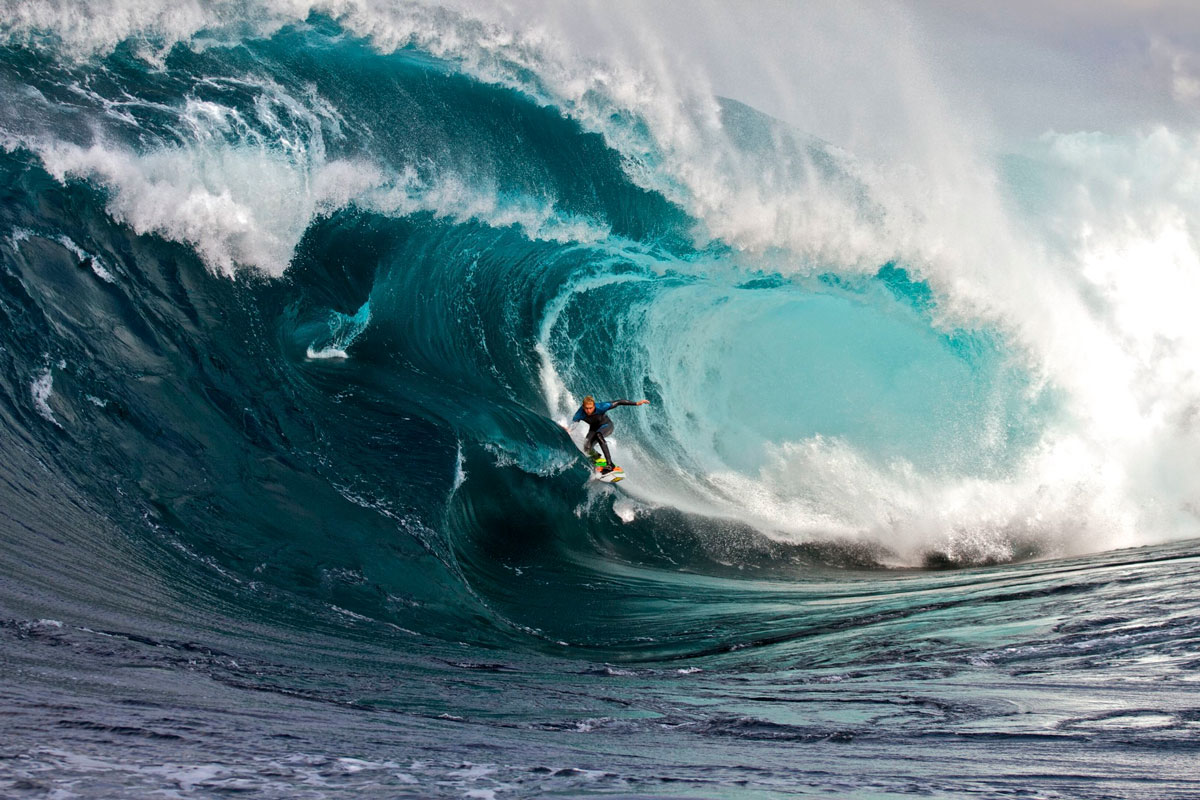 When Mark Mathews was being sucked over a bus-sized wave, heading towards shallow reef – where he would land on one leg, dislocate his knee, snap every ligament in it, and sever the artery, you might think this is the scariest moment he – or anyone – could go through.

Not so: according to him, lying in a hospital bed weeks after the incident, after surgeons realised there weren’t enough nerve-endings to be salvaged, and being told he would never surf again, was worse.

Mathews’ career has never been the same since. Rather than wallow, however, he has altered his outlook on life, becoming a Keynote speaker and an inspiration to anyone that’s ever undergone a serious injury.

His recently released film ‘The Other Side Of Fear‘ “basically covers this period in my career” Mathews tells DMARGE, “plus my comeback.”

DMARGE got on the phone with Mathews to discuss what he has learned since that fateful 2015/2016 season, as well as the secret to true courage.

Key to even beginning any of these positive steps in life, according to Mathews, was meeting a young guy called Jason.

“I was at my darkest moment just after getting that news, in a lot of pain, taking painkillers, sitting in a hospital bed; couldn’t do anything and had been told my surfing career was finished.”

Mathews’ outlook changed when he met Jason – a fan who had got in touch to ask to catch up. Jason had broken his neck snowboarding at the start of what was supposed to be a round the world trip, and was quadriplegic.

“After meeting him my perspective totally changed – I went from being frustrated and angry at the world; feeling super unlucky, to feeling like the luckiest person on earth.”

“If I’d have hit the reef any other way…”

“Jason was showing courage, resilience,” in the face of a much tougher situation.

“That was the starting point for things getting back on track for me.”

This in mind, Mathews told us, “What you see action sports people doing holds an element of resilience and courage, but it’s not the most amazing form of courage.”

To Mathews, action sportspeople are more individuals that have become obsessed with a certain kind of activity than extraordinarily brave.

RELATED: I Surfed Australia’s Scariest Wave & This Is What I Discovered

“They develop a phenomenal skill set, which [to a degree] takes the fear out of the situation.”

“What you see me doing in the surf is a skill set developed over a huge amount of time that makes it look amazingly courageous, but there are examples of real courage – a single parent raising three kids, juggling a couple of jobs, getting squished by a mortgage.”

“When I felt the value of that shift in perspective, I made a conscious effort to feel that as much as I could – that’s not natural for me because I’m the type of person that is pessimistic and find the problems in everything.”

“I treated it like going to the gym, 3 times a day for 5 mins – just to feel it [that gratitude] and that had such a benefit.”

Mathews also shared some tools which can help all of us develop a greater sense of gratitude in life, and a stronger direction.

“Get a piece of paper and draw a line across the middle. Now label the top ‘heaven’; the bottom ‘hell.'”

“Career, finances, personal relationships, health… Build out a picture so you understand what you’re trying to avoid.”

“You create clarity in your mind around what’s important and that makes you resilient.”

“Anxiety, stress and uncertainty are at the core of all fear – you are uncertain you’ll survive the situation – so build certainty into your life.”

“You make 30 thousand decisions a day – if you’re not clear on where you’re going or what you’re trying to avoid, every single one of those decisions will be much more stressful.”

Mathews also told us some of the “standard” strategies of digging yourself out of a whole “are radically overlooked when it comes to mental health.” These being? Diet and exercise.

“Stop eating junk food and drinking alcohol; go out into nature and do some exercise.”

“What consists of a healthy diet is very misunderstood in this country and probably causing a lot of psychological distress because people are metabolically sick. [Getting your life back on track] can be as simple as getting your metabolism and hormones in order.”

RELATED: Incredible Yosemite Photo Proves Why Nature Is So Damn Important For Your Mental Health

Finally, Mathews leaves us with, in his view, one of the foundational skills of dealing with struggle; living by principles.

According to Mathews, if you are governed by principles that are important to you, “not chasing external goals for reward or pleasure” you will be harder to rock.

“Honesty, courage, humility, vulnerability – if you adhere to those things every time you make a decision you feel the positive effects; every time you don’t it saps you.”

“That’s what grit is borne out of.”