Hopefully he’s not chasing you…

Say what you like about Shia LaBeouf’s personality, acting or activism – but the man’s got a sense of humour, and he knows how to dress.

Whether it’s effortlessly rocking military-inspired looks or scrubbing up in Gucci suits that are crisper than a starched napkin, the enigmatic actor normally puts a lot of thought into his ensembles.

However, the ‘revealing’ outfit he was spotted in yesterday is a little more lowkey, and one that many would say is guilty of committing the ultimate men’s activewear crime. Yet bizarrely, the man makes it work, lending further credence to the celebrity-led athleisure trend that more Australian men ought to get amongst. 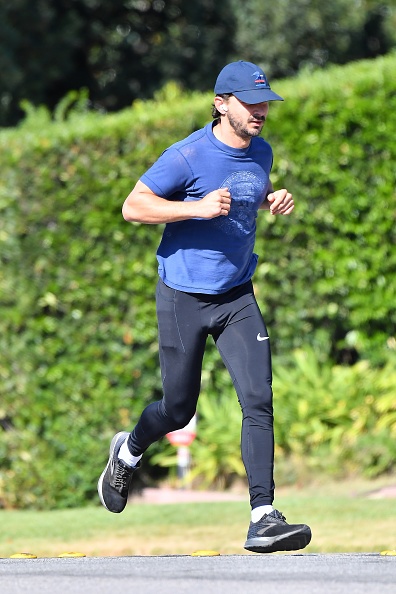 While the outfit’s a little tight for our liking (which is what’s made most people unhappy, if you catch our drift) it breaks an activewear boundary ripe for the romping: the so-called ‘necessity’ to always wear shorts over your compression tights.

Think about it: other than stopping those who are insecure about their own masculinity mocking you for looking like a ‘yoga chick’ or asking the never-hilarious ‘forgetting something?’, shorts have no practical value when worn over your Skins. Indeed, they might be counterproductive – a greater crime than letting it all hang loose, brah.

Another celebrity who’s on the same wavelength as LaBeouf is LeBron – ‘King James’ shared a photo of himself working out in nothing but some compression shorts (and his signature basketball sneakers. Gotta rep the sponsors.) Of course, this is in the comfort of his own home, so not a ‘crime’ by any means. Fashion is fickle.

While women have been wearing unadorned activewear for yonks (even when not working out, which is perhaps missing the point) men haven’t been quite as keen to embrace skin-tight style. LaBeouf is somewhat of a fashion bellwether, however, so perhaps it’s time to get over the stigma of feeling we must wear shorts over compression tights.

That said, LaBeouf’s got a lot on his mind at the moment, so maybe it’s not as intentional of a fashion choice as it seems. The actor is facing misdemeanour charges over the alleged theft of a man’s hat, after a nasty scuffle he had a few months ago, the Los Angeles Times reports.