There’s a reason they need sun loungers; their beaches aren’t even comfortable… 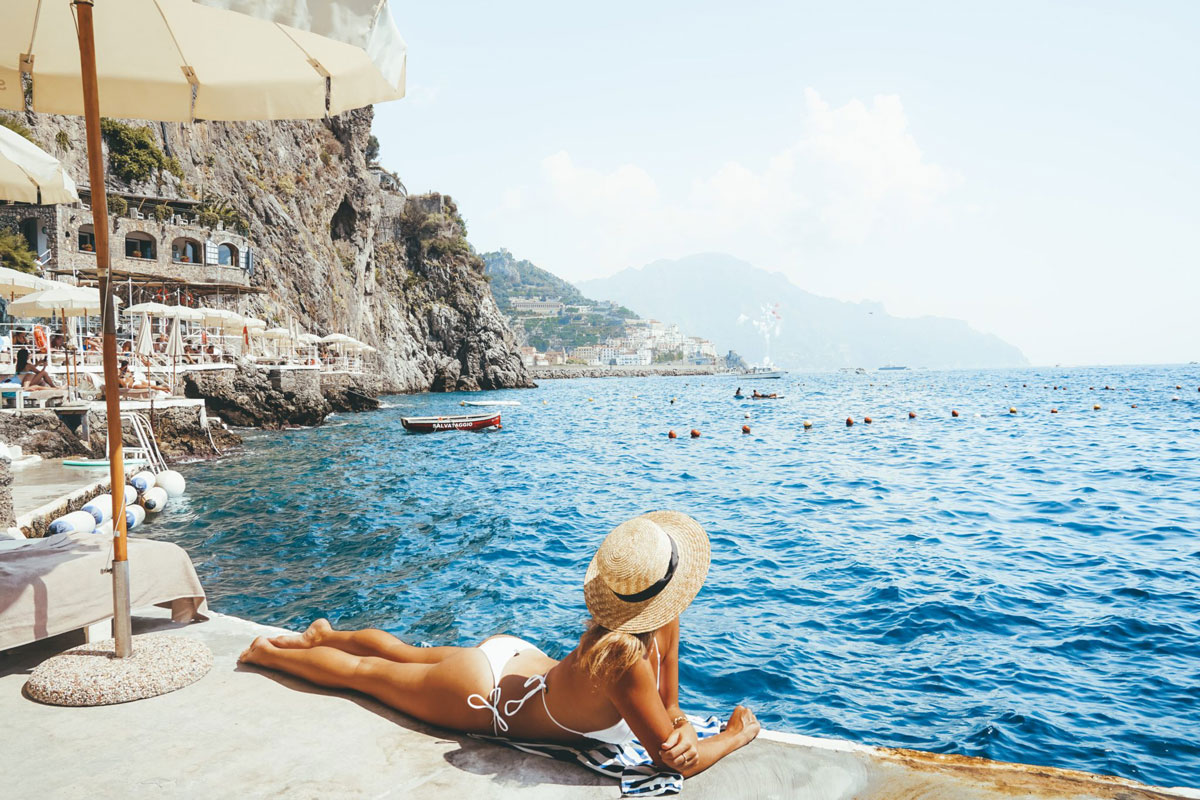 When Amalfi Beach Club announced its plan to turn part of Bondi beach into a pay-by-the-hour cabana club, many Australians’ reaction was, loosely paraphrased, “f*ck this.”

We have a proud tradition of equality on our sand. They are one of the last remaining uncommercial spaces. And though we revel in different experiences overseas, it’s always nice to come home to something low key.

Heck, half the reason so many Europeans love Australia’s beaches is because they are so natural (and soft-sandy).

Yet, as we can’t go overseas right now, one man has decided to bring Europe to Australia.

As news.com.au reports, “Beachgoers may soon have to fork out a fee to enter part of Bondi Beach after a plan was put forward to turn a section of the sand into an exclusive beach club.”

How would this look? Think: the love child of Instagram-famous Bali day club Mrs. Sippy and the umbrellas of Mykonos, St Tropez; Capri.

“Amalfi Beach Club has submitted a proposal to Waverley Council to block off a section of the beach, add in seating and serve customers food and alcohol right on the sand as they cannot ‘sojourn to Europe’ this summer,” news.com.au reports.

According to Amalfi Beach Club’s proposal, the luxury cabana zone – to be set up opposite Roscoe Street – would target “high net worth” individuals between 25 and 45, with “high disposable income,” early reports suggested.

Organisers also reportedly expect the “elegantly fenced” 24 metre by 14 metre area to attract “aspirational professionals such as doctors, surgeons, members of the finance industry”, as well as “publishing, advertising, fashion, beauty and modelling.”

The business, however, has emphasised, “we don’t discriminate,” recently taking to Facebook to mock “misinformation” it claims has arisen in recent days.

“We would like to dispel some misinformation. Our beach club will not be harvesting organs of homeless people to serve as burgers to the rich. We are not an attempt by the People’s Republic of China to take over Crown Land. Women will be allowed entry. Your minds will not be controlled by alien lizard people while enjoying premium service and yummy food at Australia’s favourite beach,” Amalfi Beach Club posted to Facebook this morning.

“The beach will remain free for everyone! Only those who wish to support local business will be asked to pay $80 as a deposit against their F&B [food and beverages], while all others may occupy the remaining 98% of the beach as before.”

Admittedly, at $80 being charged for a two-hour spot on one of the cabanas, Amalfi Beach Club is hardly targeting Those On Centrelink.

RELATED: ‘A Place To See & Be Seen’: Incredible Photo Reveals Why Everyone Should Visit Capri Once

There are two opposing arguments at play. Supporters argue the initiative will boost community morale and bolster the ‘adjacent’ economy (Icebergs is slated to help with catering), as well as bring a ‘cultural bent’ to Bondi for which there is huge demand (see: Australia’s Europe fetish).

Detractors argue this demand is mostly limited to a Dickhead Demographic, and that the money will not trickle down to the rest of the economy enough to sacrifice Bondi’s natural atmosphere for Sydney’s rich beautiful show-offs to play dress up (or down). They also argue this could be a slippery slope to the commercialisation of the rest of the beach.

There’s also the whole: why would you try to change the one area – the one rare place – where Australia actually does something better than the rest of the world, and try to import the one aspect of European culture that’s not as good as Australia’s?

“G’jiorno mate, these uncomfortable stones covering the sand and rusty, unrestored 1970s loungers are imported directly from Positano for the authentic Italian experience of being on a not-particularly-good beach. Another limoncello?”

Janek Gazecki, the Bondi-based organiser of Urban Polo events who is behind the Amalfi Beach Club proposal, when asked by The Guardian whether he thought Australians would be opposed to the idea of commercialising the beach, noted surf events with corporate sponsors and the television show Bondi Rescue.

He also said a similar club that runs on Adelaide’s Glenelg Beach had set a precedent.

The question was also raised on social media: are Australians backwards for not getting on board with this?

“Sydney is looking more backwards than us [Adelaide] with their outcry over this,” one wrote on Facebook.

Further comments railing against Amalfi Beach Club show many Australians are inherently suspicious (whether or not in this case they are right) of innovation and privatisation, putting forward classic complaints like “planning permission” and “equality,” and raising the question – will Australians ever be able to stand the gleeful smirk of an entrepreneur, even if it comes with progress?

“How do they give you permission and not give permission to others? It would be hypocritical. It’s like when they raise the building height limit for one building on a street, immediately everyone on that street has that right,” one Facebook user wrote.

“Why don’t you people go away… You don’t get the right to sequester part of it to make money,” wrote another.

This led into a broader debate around the point of the beach, with many Australians unable to wrap their heads around (or understanding, but despising) the stereotypical European notion that the beach is more than a place to cool off, but ‘a place to be seen.’

To be fair, if anywhere in Australia suits this ‘performative’ ideology, it’s Bondi… But we digress.

For his part, proposal mastermind Gazecki remains nonchalant: “From our end the feedback has been overwhelmingly positive,” he told The Guardian. “It’s excellent for the local economy – local restaurants get more business.”

“It’s a no-brainer, and we can’t see any rational reason why this can’t proceed. It’s not like regular beachgoers will need to pay to access the beach, this is just an opportunity for there to be a slightly more cosmopolitan way to enjoy the beach.”

DMARGE’s take? Australians are 100% ‘backwards’ in our attitude to beach culture. And that’s a good thing (not to mention part of our international charm).

Who’s right? We’ll leave it up to you to decide.

As for who’s in the right legally, the decision remains in the hands of local government, with news.com.au reporting, “The organisers had initially asked for the business to be run between November and February but that was knocked back, with Waverley Council deeming it ‘unsuitable based on Council policies and in the interest of our local community.'”

“Amalfi Beach Club has now put forward new dates for the event to be held between February and May next year, which is being reviewed by the council.”

“If the proposal is accepted, the beach club would likely run from 12pm to 9pm from Thursday to Sunday each week.”

Beyond the ‘un-Australian’ outcry, another challenge the Amalfi Beach Club proposal faces is the dangers of mixing drinking with swimming.