Stereotypes are the bread and butter of international relations: there are almost 200 countries in the world, and virtually every single one has a stereotype associated with them. The French are snooty, the Japanese are polite, the Spanish do nothing but sleep all day…

RELATED: The ‘Untranslatable Secret’ To The Perfect Spanish Meal

While they’re often reductive, they’re not always a bad thing. One could argue that Australia’s global image as a laid-back, friendly place is often far removed from the realities of living in the Land Down Under.

But some stereotypes hint at a deeper truth and cultural learning that we ought not to dismiss as simple jokes.

Russians are widely considered to be gruff, glum and brutish people; unsmiling and intimidating in both appearance and character; their country a scary, topsy-turvy place. No doubt you’ve heard an ‘in Soviet Russia…’ joke before. And it’s a stereotype that seems to add up, particularly if you look at old photos from the Soviet era. Facebook page Soviet Visuals, an underrated gem of an account that curates aesthetic photos from behind the Iron Curtain, shared this 1973 advertisement for Stolichnaya vodka, which reaffirms this stereotype in hilarious fashion. 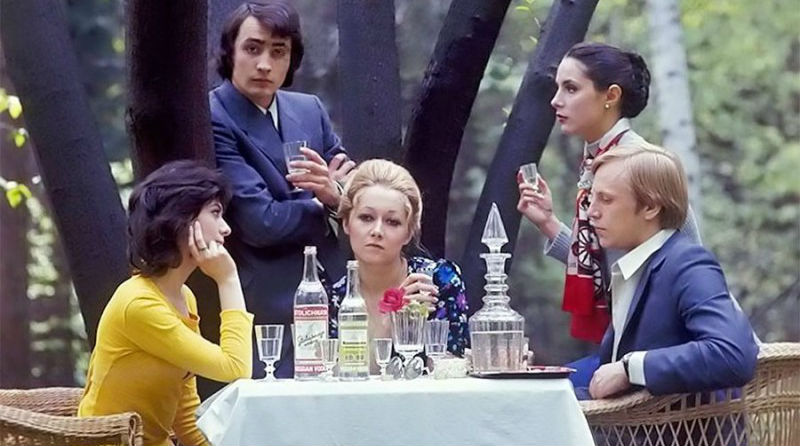 The first question that comes to mind is this: how do Russians manage to look depressed even at a garden party?

Superficially, it’s hilarious to think that this was considered a good look for an advertisement – they’ve got “funeral procession faces”, as one commenter aptly put it (although another observed that “to promote and advert vodka in [Soviet] Russia is stupid” in the first place).

But for anyone who’s familiar with Russian culture, the model’s expressions might not seem as inappropriate as someone in the West might assume.

Tanya Golubeva, author of Understanding Russia and curator of a blog with the same name, relates that “in Western society, smiling is a highly valued social behaviour and people who smile a lot are perceived more positively.”

“However, [the] Western smile first of all signals politeness and Russians smile only when ‘there is a reason to smile’. We even have a saying – ‘only fools smile without any reason’.

“Not smiling to strangers is a cultural norm, since there is no special reason why we should greet a stranger that way. Unlike Western people, who treat strangers as good people until some of them act as bad people, we treat all strangers as aliens until they prove that they can be trusted, until they become our friends. In fact, if you start smiling to strangers on the streets – that will make them uncomfortable or they will think that you are smiling at them (maybe they look funny because of their appearance or hairstyle or there is something wrong with their wardrobe). They will get confused and will not smile in return.”

A 2016 article in The Atlantic suggests that this isn’t a uniquely Russian phenomenon, either. The article explains that, contrary to how smiles are viewed in the West, smiling is considered a sign of insincerity or deviousness – not things you want to relate when you’re trying to convince someone to buy your vodka.

Exploring the findings of a 2015 Polish study, The Atlantic reveals that countries that there’s a strong correlation between people in countries who are more corrupt also finding smiles to be a sign of dishonesty or simple-mindedness. Russia has historically suffered from corruption – before, during and after communism – so this makes sense. In contrast, Australia is a far less corrupt, more affluent country: accordingly, Australians widely consider smiling to be a sign of honesty and intelligence.

Interestingly, the history of Stolichnaya (or ‘Stoli’) is also one mired in corruption and controversy. One of the oldest and best-known Russian vodka brands, Stoli was the first premium Russian vodka to be exported to overseas markets like the US – PepsiCo signed a savvy barter deal with the Soviets in 1972 whereby Pepsi concentrate was swapped for Stolichnaya vodka litre per litre, meaning Pepsi was the first American brand to take root in the Soviet Union.

After the collapse of the USSR, the trademark for Stoli ceased to exist, and despite Russian government efforts to secure it, a private firm also laid a claim to the Stoli brand name after some dodgy dealings. It’s been the focus of a bitter trademark dispute between the Russian government and the Luxembourg-based SPI Group that sells Stoli across the world, one that was even fought in Australian courts, as The Sydney Morning Herald reported in 2009.

All we know is that Stoli tastes so great it’s sure to put a smile on anyone’s face, even a Russian’s.