Straying from the path of conformity.

The words stylish and comedian aren’t necessarily two words you’d expect to find pieced together in a sentence. For the majority, stand-up comedians practically give themselves a persona based on the clothes they wear, with each stand-up gig proving to be a regurgitation of skinny jeans and a slim-fit t-shirt, perhaps with a plaid shirt thrown in for good measure (buttons undone, of course).

But one man who strays from the path of conformity is Dave Chappelle. The American comedian, who is widely regarded as being one of the best stand-ups ever for his satirical take on world events, as well as combining comedy with speeches protesting against racial inequality, regularly proves he knows how to dress well. Whether it be on stage during a recorded gig or papped strolling the streets, Chappelle consistently breaks away from the notion that comedians don’t know how to dress.

The most recent evidence comes from a picture taken on November 7th, when he was seen in Midtown Manhattan, New York City before making his way to the Saturday Night Live studios, where he was due to be the host for the most recent airing. 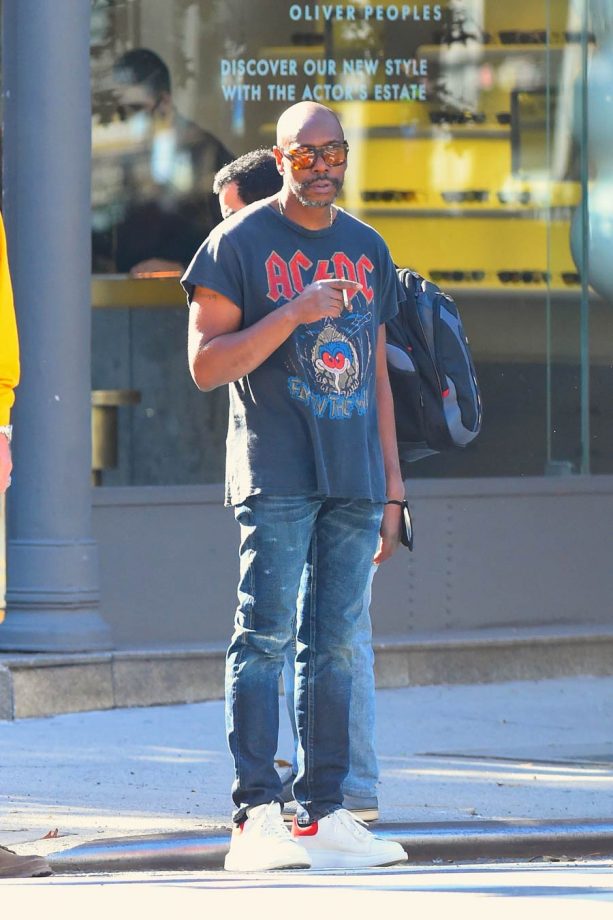 Combining an AC/DC t-shirt commemorating the Australian band’s 1985 album ‘Fly On The Wall’, with slim jeans and chunky-sole, oversized Alexander McQueen sneakers, Dave proved not only can comedians dress well, but guys who are pushing 50 need not condemn themselves to a life of ill-fitting clothing. His age also means he’s actually old enough to know who AC/DC are, so he’s not just wearing it ironically and to be seen as ‘cool’.

During his comedy special released in partnership with video streaming giant Netflix, Chappelle is usually seen rocking custom-made clothing with either his surname or a ‘C’ logo stitched onto them. He doesn’t tend to be one to promote brands during his shows either, so by rocking recognisable sneakers and a – sort of – branded t-shirt, he’s clearly separating his work and personal lives (although he was also seen wearing a Chappelle branded facemask on his strolls around New York).

Dave went on to host Saturday Night Live that same evening – the same day Joe Biden was officially announced as the winner of the US Presidential election – and opened with a monologue that once again brought up the subject of race equality in the United States, alongside various other events of 2020 including the global pandemic.