“Failure to comply with this determination incurs in a criminal offence punished by law.” 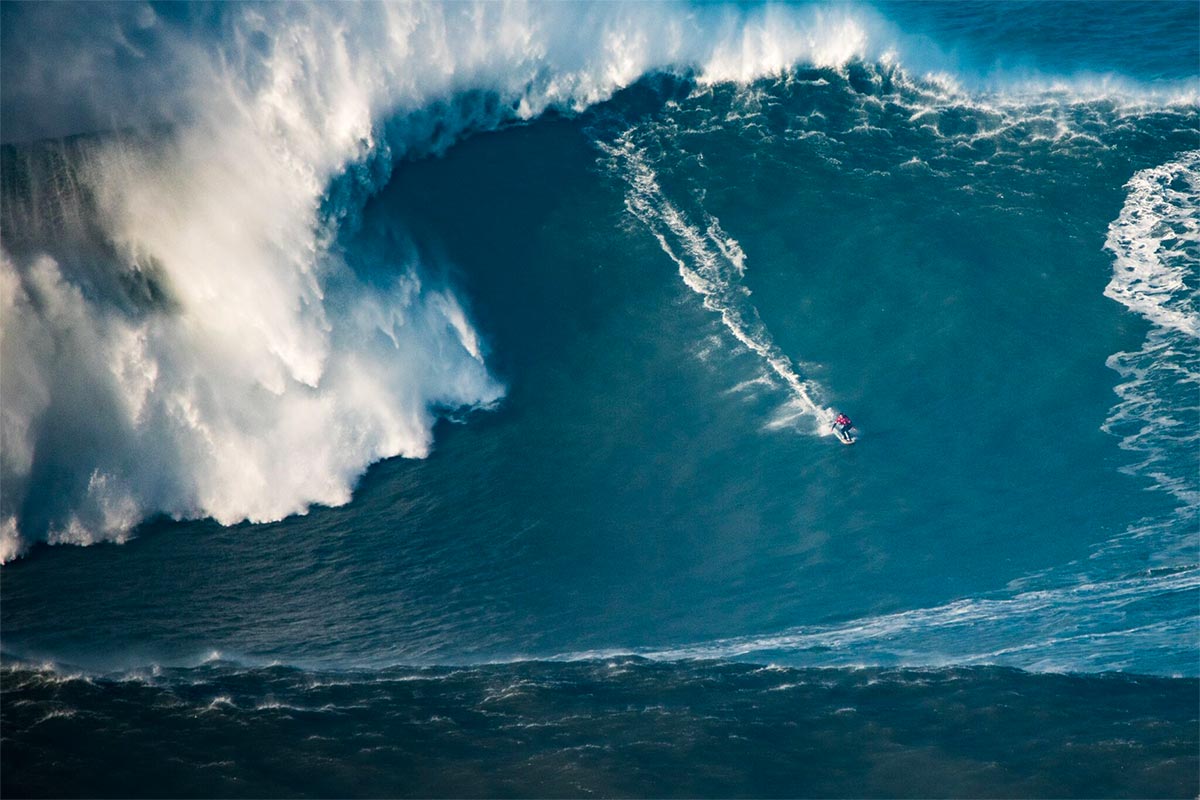 In response to the massive gathering of voyeurs, officials have banned surfing at Nazaré, Portugal’s premier big wave attraction, and one of the world’s most iconic surf spots.

This follows last week’s “century swell,” which saw everything from potentially world-record-breaking rides, altercations between jetski drivers and terrifying wipeouts.

Portugal’s National Health Commission announced the ban on Wednesday, November 4th. It is to remain in place “until further notice.”

Surfline reports, it’s “understood that the Mayor of Nazaré is working to allow freesurfers access to the water, outside of ‘events.'”

The ban has come at a poor time for those hoping to watch the Nazaré Tow Surfing Challenge, whose waiting period started on the 2nd of November.

A photo of a statement from the harbour HQ, obtained by Magic Seaweed, reads (translated from Portuguese):

“In the current context of the pandemic in Portugal, as determined by the regional health delegate and the regional health administration, Free Surf and Tow-in surfing are banned at Praia do Norte, due to the promotion of the public agglomeration, which constitutes an increased risk for the public health. Failure to comply with this determination incurs in a criminal offence punished by law.”

Andrew Cotton, an English big wave surfer, told Magic Seaweed he had no plans to appeal the decision: “I understand their position and it’s for the benefit and safety of others and the local community. It effects a lot more people that the surfers though, which is a great shame.”

Though Tapia recognises “the situation on the cliff was chaos,” he told Magic Seaweed he believes there are smarter ways of solving the problem.

“Considering that it’s so easy to block the entrances to Nazare, I hope this decision is reviewed. Feels like us, the surfers, will be paying for the irresponsible behaviours of spectators. It’s our passion, our job and authorities can easily control that. Although the risk of getting injured in Nazare is quite high, it’s very unlikely we will put pressure on the hospital system, but that is not a reason surfing should be banned.”

If DMARGE had to guess, we’d say the closure is symbolic (perhaps like Manly and Bondi’s temporary closures earlier this year), intended to deter visitors more so than surfers, and that a resolution to keep the professional sportspeople happy will soon be underway.