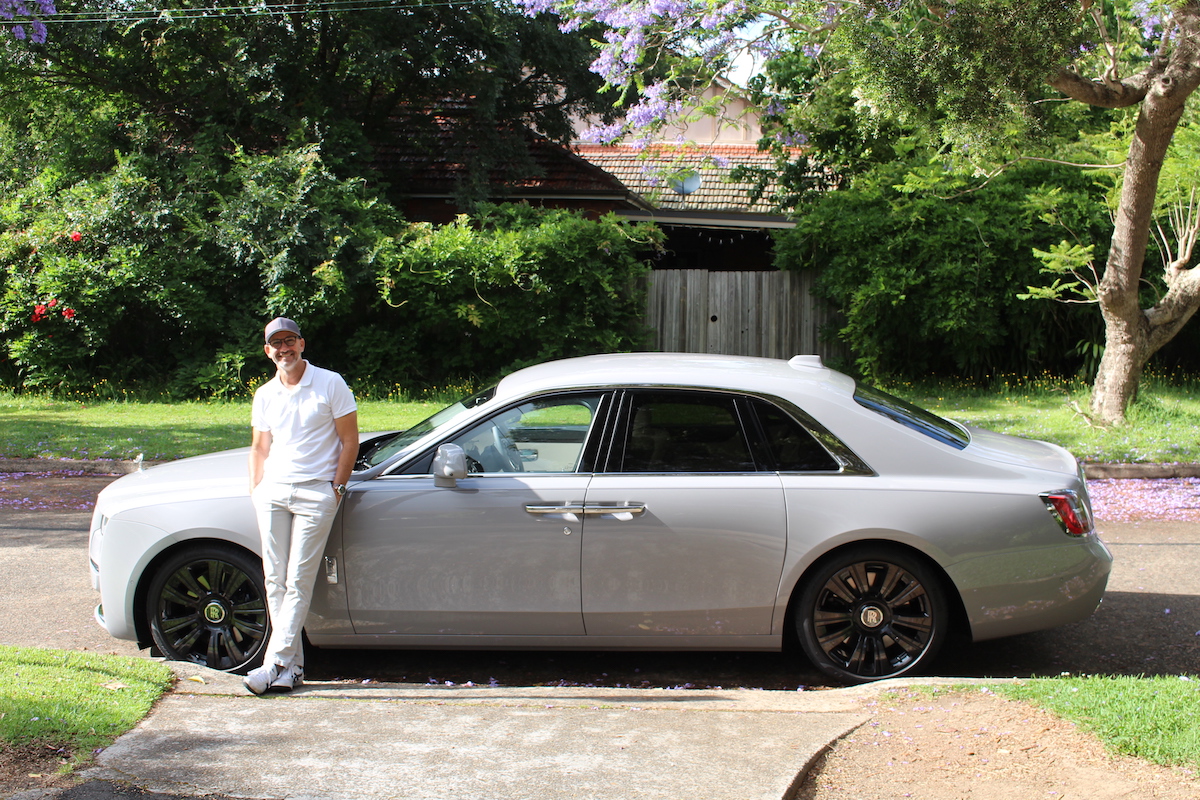 Luke O'Neill and the Rolls-Royce Ghost pick me up for work. Image: Jamie Weiss/DMARGE

I remember when I was in primary school and my parents picked me up from school in a new Toyota Kluger straight from the dealership. I remember thinking our new car was the most amazing, luxurious thing I’d ever experienced. There was air conditioning in the back! And armrests! That first ride was incredibly overstimulating.

They still have that Kluger, but the car I spend the most time in these days is my trusty 1996 Ford Probe – a great car, but nowhere near as comfy as the big Toyota.

And in a completely different universe to the 2020 Rolls-Royce Ghost that drove me into work today.

Rushing out the door as per usual, I was greeted by Luke O’Neill, luxury and performance driving coach, who was to be my chauffeur for the morning. O’Neill has years of experience driving some of the nicest cars money can buy, but even he reckons the Ghost is unlike anything else he’s driven.

“I’m actually looking for a new car right now, and after having spent a few weeks with this thing, I’ve been spoiled… How does anything else compare?”

This grey example of the new Ghost is one of only five cars in Australia. It certainly cut an impressive figure on my quiet suburban street, the Spirit of Ecstacy ornament shining in the sun and its twin-turbo V12 softly purring as I got in. As the rear suicide doors opened, I stepped into a world of leather, chrome and wood. Embarrassingly, I tracked in a bit of grass and dirt, my boots leaving smut on the pristine white floormats. I’m not used to being driven: even when I get a taxi or Uber I’ll normally sit in the front. In the back seat of a Rolls, I was a fish out of water. 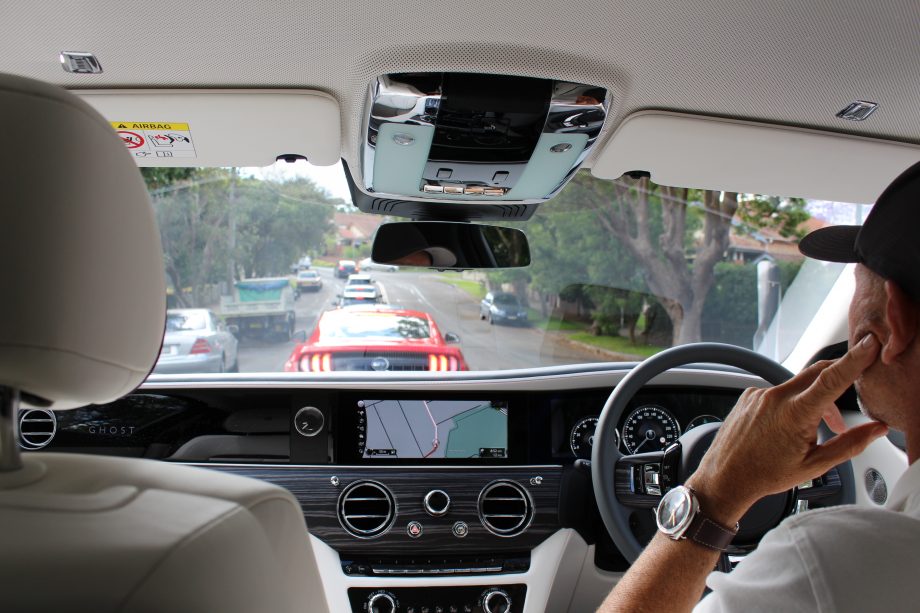 Being stuck in traffic is almost pleasurable in a Rolls. Image: Jamie Weiss/DMARGE

The strangest thing about the experience was how normal it felt. Maybe normal’s not the right word… Tranquil is better, which O’Neill relates that the entire point of the Rolls experience.

“The entire philosophy of the car is that whether you’re driving or being driven, you leave the car more relaxed than when you got in.”

It’s so quiet inside the Ghost that I can hear my watch ticking. We’re talking at a whisper because to use our normal voices would be too loud inside such an automobile. The massive engine registers as but a hum – although when O’Neill put his foot down, it still managed to impress when it comes to performance. Rolls-Royce normally describe their cars as having ‘adequate’ horsepower, but “talking about horsepower is almost irrelevant” when it comes to these cars, O’Neill explains.

Rolls-Royce describes the brand’s design philosophy as ‘post-opulence’. People expect a Rolls to be sumptuous, but it’s about going beyond that. Case in point: the Ghost’s eight-speed automatic transmission communicates with up to seven satellites multiple times a second in order to anticipate the road in front of you so that it always holds the right gear for the road conditions ahead. The ‘starlight roof’ – one of the brand’s most iconic modern features – also conceals an advanced speaker array, and the chassis has air channels that act as a subwoofer, so the sound system is phenomenal. The feature list is too long to recount.

What’s unique about the Ghost is that it’s just as much designed for the driver as it is for the passenger. Every tiny aspect of the entire experience is centred around making things as effortless and comfortable for everyone involved. There are no compromises with a Ghost.

Arriving at the DMARGE offices in Redfern, I almost had to be dragged out of the car… I could have melted into their seats, it was so comfortable. Sadly the rain that was forecast didn’t eventuate – I was looking forward to testing the umbrellas that are contained within the Ghost’s doorframes. 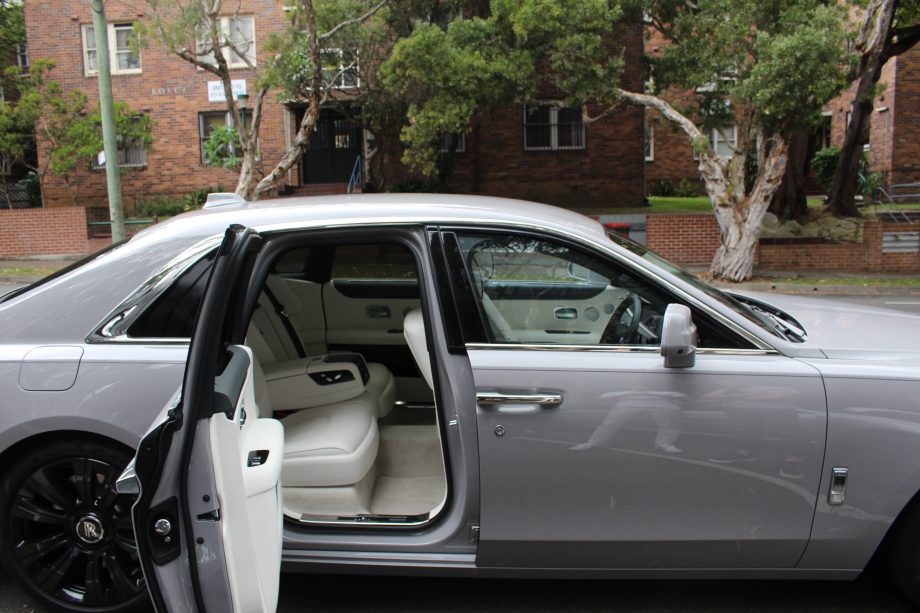 It only goes downhill from here. Image: Jamie Weiss/DMARGE

While I’m grateful that I was able to play-pretend as a British royal for the morning, the issue is that I’m now ruined for life when it comes to cars. It’s like stepping out of Plato’s Cave – I’m going to compare every other car I drive, ride in or see to the Rolls-Royce Ghost, and they’ll all come up short. Once you know how good a Rolls is, you’ll never settle for anything less. Hell of a problem to have, but there we have it.

Guess I better start saving up, then.

You can browse the Rolls-Royce range online here.