“Slammers started when I had never flown in business class and felt heavily judged and profiled for how I dressed, acted and behaved.” 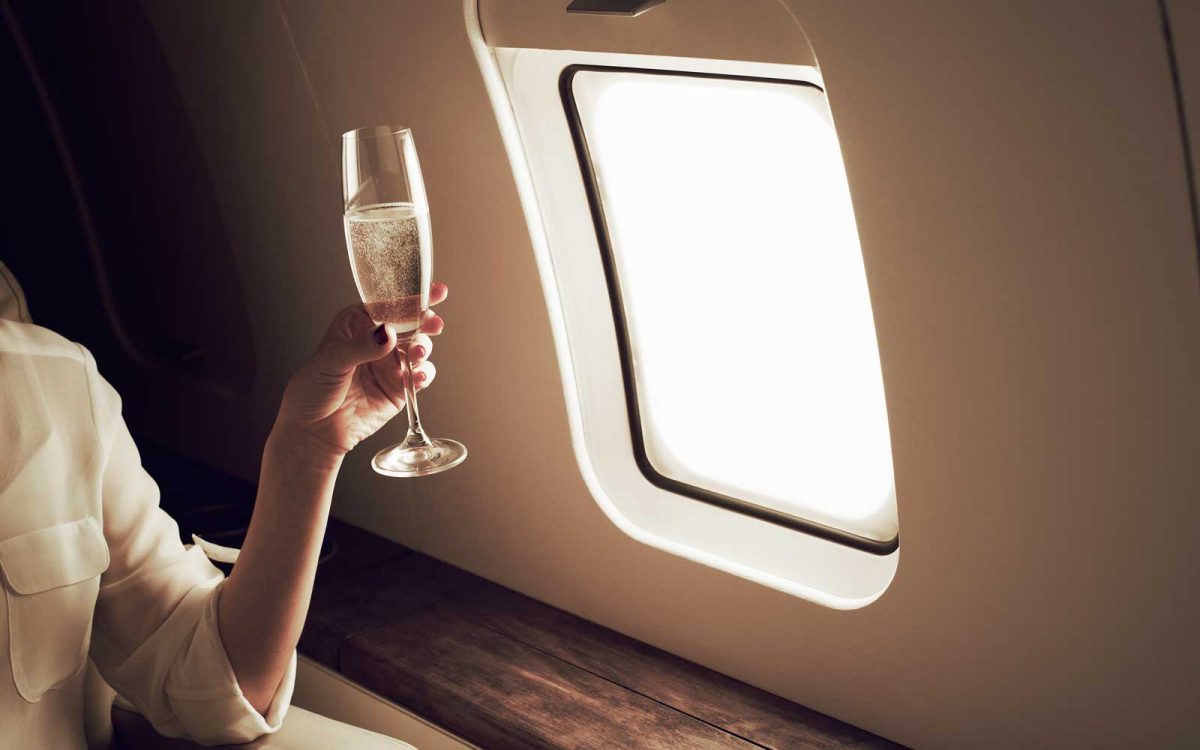 Think coronavirus is the only thing to go viral this year? Think again.

There’s a new trend in town, and many are not happy about it.

The ritual? ‘Slammertime’ – skulling your flute of champagne whilst sitting at the pointy end of a plane.

Far from an empty hedonistic gesture, its proponents say it fires a socio-political shot across the suite.

The creator of ‘slammertime’ anonymously told DMARGE that ‘slammertime’ started as a gentle f*ck you to the pointy end snobs of the world (as well as just “a huge amount of fun”).

“The whole thing of slammers started when I had never flown in business class and felt heavily judged and profiled for how I dressed, acted and behaved. I don’t think there should be a stigma about nice things. How many people have walked into a really nice restaurant or hotel and felt profiled?”

“This shouldn’t be the case and it’s a bit of fun trying to break down classist boundaries which I don’t think should exist. The behaviour is light-hearted and fun and brings us as everyday people together. I must get sent hundreds of videos each week from people of all backgrounds doing a slammer on a plane or at home, and it’s just a fun thing. Similar to perhaps doing a round of shots on a night out.”

Perth-based travel blogger and owner of Flight Hacks Immanuel Debeer, who was alerted to the trend by a friend, told DMARGE ‘slammertime’ was “the only morale booster these days.”

Canadian travel hacker Spencer Giles, who “was introduced to [‘slammertime’] by people on Instagram,” said part of the attraction was the reaction.

“It’s entertaining when you get a sudden eye roll or reaction from an elite frequent flyer on board in first or business class cabins. Its something we look forward to and will continue to do so on all our trips when possible.”

“From a distance, tasteless and tone-deaf sounds pretty right to me,” Van Krieken said.

“When I think about it I don’t regard business class travellers as being all that well-dressed…I’ve seen some pretty shabby types wander though to business, and the very few times I’ve flown business, I haven’t felt at all that other passengers are particularly stuck up – it’s just a plane trip, and mostly everyone just keeps to themselves.”

“Finally, the behaviour being described would get lots of disapproving looks and ‘eye-rolls’ in cattle class as well, we’re talking about standards of behaviour in public places that don’t actually vary that much across class differences ….if anything, I’d imagine upper class young folk would actually be *more* tolerant of it. It’s ‘excess’, and that’ll get disapproval in most places. The difference is that you don’t get champagne in Economy.”

“Yes, it is a bit of ‘new’ versus ‘old’ money…But just a bit, there’s a lot of ‘new’ money in business class anyway…Personally I’d lean more towards the performativity of Instagram and Twitter, the pursuit of attention – they’re communicating primarily with their social media audience, not with the other people on the plane,” Van Krieken added.

When asked what his response would be to ‘slammertime’ detractors, the ‘slammertime’ founder said, “I would personally never judge anyone for their actions as long as they are not acting like a Knobhead and in good moral faith. It’s harmless and demonstrates a lot more about how others should look at themselves if they feel the necessity to judge some people having some totally innocent fun.”

“I’m a peasant myself. I’ve worked hard to get to where I am, and none of us should be judged for not harming anyone. That’s a really negative trait of a person if they judge someone I feel for that.”

“I couldn’t care less about likes or engagement, never have. I care about keeping it real, acting with good morals and making people smile a bit.”

RELATED: Spoils Of Being The Only Business Class Passenger On A Covid Era Flight

“I’m really unsure of the ‘slammertime’ trend. I mean I see a lot of people drinking too much and mixing drinks with sleeping pills… it never ends well. It’s a plane not a restaurant. People should remember that and respect flight attendants.”

However, she also said, “I definitely wouldn’t see it as rude. Airlines such as Qantas pride themselves on making customers feel welcome and at home… many people are excited and paid a large amount to fly. I personally love a few bubbles with arriving on board a business class flight.”

“However common sense must prevail. And customers must remember it’s not a bar. There’s a time and place for getting smashed and a plane is not it. So knowing when to stop and acknowledging the demands that air travel has on the body is really important.” 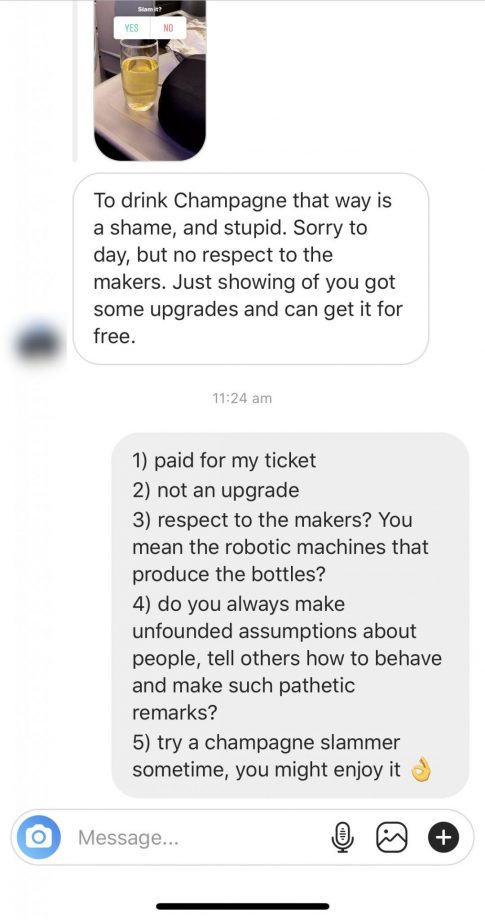 Lizzie Post, etiquette expert and co-president of The Emily Post Institute told DMARGE, “any time you wave your [metaphorical] middle finger at the outside word it’s probably not good etiquette.”

“This doesn’t mean it’s not funny or understandable, but it says more about you than those it’s aimed towards.”

“I’m not sure if it’s good. Personally, I’d find another way.”

Whatever your take on the trend, once travel gets back to normal, expect the hashtag (there are currently 2,612 Instagram posts with the hashtag ‘slammertime’) to grow.

While DMARGE would like to warn against the risks of lazily generalisations like “elites” and “the media” we can’t help but feel our hearts warmed by the irreverent ‘slammertime’ trend.

Even if you disagree with the sheer excess of business class (a fair objection to make, but not one we have time to get into here), those doing ‘slammertime’ are not wasting any more resources than the other business class passengers – they are just doing it in a more conspicuous way.

What will happen next to ‘slammertime’? Watch this (air) space.