Plus: our ‘Pharoah’ esque attitude to buying houses, explained. 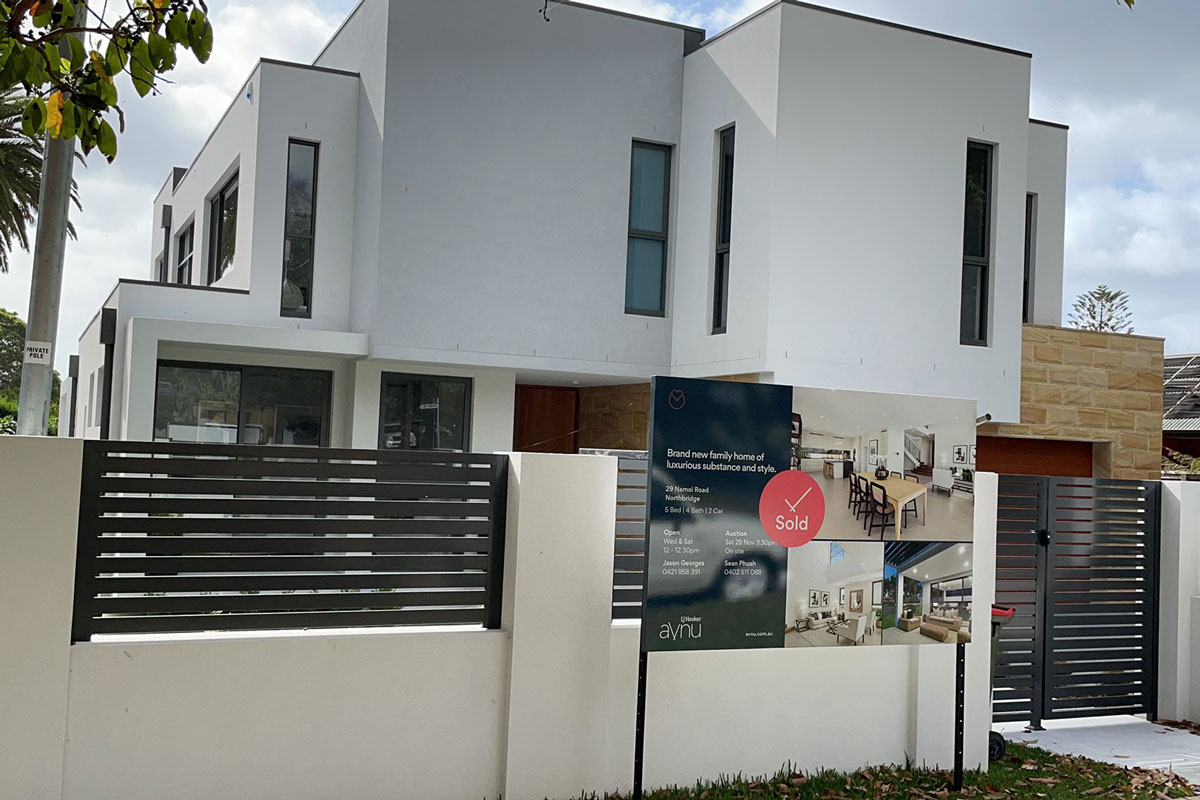 Our take? Never mind their kids don’t appreciate it. Never mind financial stress crumples relationships. Never mind your lumbar region doesn’t enjoy the ‘cultural value’ of Berkelo when you spend most of your time in the office.

RELATED: The Tasty Sign An Australian Suburb Is Set To Boom

The Egyptians had their pyramids, Sydneysiders have suburbia.

Though painting citizenries with a broad brush tends to piss people off, this particular ‘wide net’ theory is supported by stats.

Studies have shown Sydney is not only the most unaffordable market to enter in Australia but, by certain metrics, “more expensive than New York, London, and Singapore.”

All the while, Sydney’s median income is actually lower than cities like New York’s.

Yet we continue to scoop up massive mortgages in order to be in the thick of the action (or in a desirable suburb).

This Keeping Up With The Jones phenomenon (or, taking it at its most basic form, Sydney’s resilient property market) was perfectly illustrated at the start of November when James Whelan, an Investment Manager at VFS Group in Sydney, summed up (in DMARGE’s opinion) Sydney’s housing bubble in one photo.

He then went on to explain why many Sydneysiders to commit themselves to their city (and living near it), despite the extortionate prices.

Whelan has continued providing snapshots into suburban Sydney life, this week taking to Twitter to share an image of an open house which he says ended up selling for +4 million dollars.

Lower north shore property is nuts at the moment

One commenter claimed the place, “Went for 5.1 [million].”

The image sparked various users to comment on the “nuts” state of Sydney’s Lower North Shore.

“I’ve been surprised that even commercial property/retail seems to be doing okay. Feels like [sic] panic buyjng can continue for a bit, but seriously valuations are bonkers,” one user wrote.

“Lower north shore property is nuts at the moment,” said another.

The aesthetic of the house was also discussed, with one user remarking, “Looks like a scaled down nuclear power station.”

“How much value does the ‘Private Pole’ add? Thinking of adding one myself.”

Even ruder, another wrote, “The person who designed that facade must be vision impaired.”

Whether the place reminds you of Barcelona or Fukushima, it’s hard to argue Sydney’s property hasn’t been, in pockets like this, remarkably resilient this year.

Speaking to DMARGE after the federal budget was announced, Whelan told us first home buyers are still being “treated like gods.”

“The cynic in me doesn’t really like anything to do with the first home buyer grant – when you say ‘we’re going to give first home buyers a $7,000 bonus,’ that just goes straight onto the sticker price of the house.”

“The government has shown their hand… whatever it takes to not let the housing market correct… that’s absolutely the way they’re going to go.”

Whelan also said, in his opinion, this treatment of home buyers comes down to loyalty.

“You’ve always got to pay your debts… the debt they’ve got is to the people that decided, ‘no, we’re not going to vote for Bill Shorten and Labour’ a couple of years ago when they [wanted to] bring in changes to negative gearing which would have really affected a lot of investment property owners.”

“This coalition, they are paying them back for showing that loyalty and keeping them in government another few years.”

“That was on display again last night,” Whelan said the day after the budget was announced. “A budget which is great for building, construction, in my view a budget that is doing what it needs to do now to get Australia back on track.”

Unlike New York and London, which are bigger, Sydney has a smaller number of ‘goldilocks suburbs’ which give residents the best of both worlds.

“It’s all about demand and supply – that have pushed prices to where they are today – they’ve seen a good appreciation in the value of homes over a long period of time.”

“Sydney year on year has proven to do very well compared to other cities.”

“Compared to London; New York, we’ve got our one CBD and those suburbs that adjoin that one CBD.”

In The Big Apple, for instance, “Manhattan is pricey, but outside in greater NY, prices are a lot cheaper” Brown told DMARGE.

For the moment, Sydney’s big price tags look set to continue, with some caveats.

As the ABC reported on the 6th November, “After years of dire predictions that Australia’s property bubble could burst, national house prices continue to withstand the otherwise devastating impact of the coronavirus pandemic, and once again the doomsayers have been proven wrong.”

“Data released this week from CoreLogic shows the national average rose 0.4 per cent in October, following five months of national declines during the COVID-19 pandemic,” the ABC wrote.

“Every state across Australia (except for Melbourne which suffered the impact of a second COVID lockdown) experienced gains.”

The upshot? Experts the ABC spoke to say there is still ample potential for a bubble rupture, but that it is unlikely to happen while the government does everything it can to keep it going.

He compared the early 1990s recession with now, showing how our level of household debt has increased over the last thirty years.

“During the early 1990s recession, the level of household debt in Australia was around 40 per cent of income, whereas now it is close to 200 per cent — one of the highest levels in the world,” (ABC).

“Each time there’s a downturn people get worried about debt and pay some of it back, but before things go too far [into the positive], the Reserve Bank cuts rates and people start borrowing again — we go back to a new level of debt and it starts the cycle again.”

Digital Finance Analytics (DFA) principal Martin North told the ABC two triggers that could expose this underlying debt (thus rupturing the bubble), are a lack of migration (which is already happening thanks to Covid) and lower population growth.

He also said selling pressure will come “from mortgage stress plus investors seeking to exit,” the ABC reports.

What will determine prices then, is an arm wrestle between all these factors and the government stimuli introduced to offset them (and the Sydney ‘must buy’ housing culture).

ANZ reckons the latter will win in 2021, forecasting house prices will rise 9%.

It looks like those who were hoping ‘the big crash’ of 2020 would help them nab their first house will have to continue consoling themself with this Spanish recession advice for Australians.