Too super for the supercar.

Dwayne ‘The Rock’ Johnson is incredibly buff. The former WWE champ and football player – better known these days as one of Hollywood’s biggest stars – is a mountain of a man, befitting his moniker. An almost two-metre tall, 118kg behemoth, The Rock takes his fitness seriously, even working out so hard he starts bleeding.

Being the muscliest man in showbiz has been an integral part of his success. But sometimes being buff as hell can have its downsides, as the 48-year-old shared on Instagram yesterday.

Currently filming comedy heist movie Red Notice alongside Gal Gadot and Ryan Reynolds, Johnson sheepishly related how filming was paused because he was “too big to fit in yet another sports car and now we have to change the entire shot sequence around.”

“My writer/director Rawson Thurber (pictured here on the ground setting up the new camera angle) wrote this INSANE chase sequence where I hop in this iconic Porsche and be the bad-ass behind the wheel that I am. Well, after months of prep and costs buying and shipping this car over to the States – it’s time to rehearse the big chase sequence.”

But The Rock found out quickly that his back was too wide to even fit in the car, the actor trying to “shimmy into this Porsche like a big ass brown marshmallow getting shoved into a coin slot.”

“After about 15 seconds of uncomfortable silence… Rawson, [I] and the entire crew just started laughing our asses off!! In the end we showed our agility to think quick on our feet and found “creative” ways to still get the shot.” 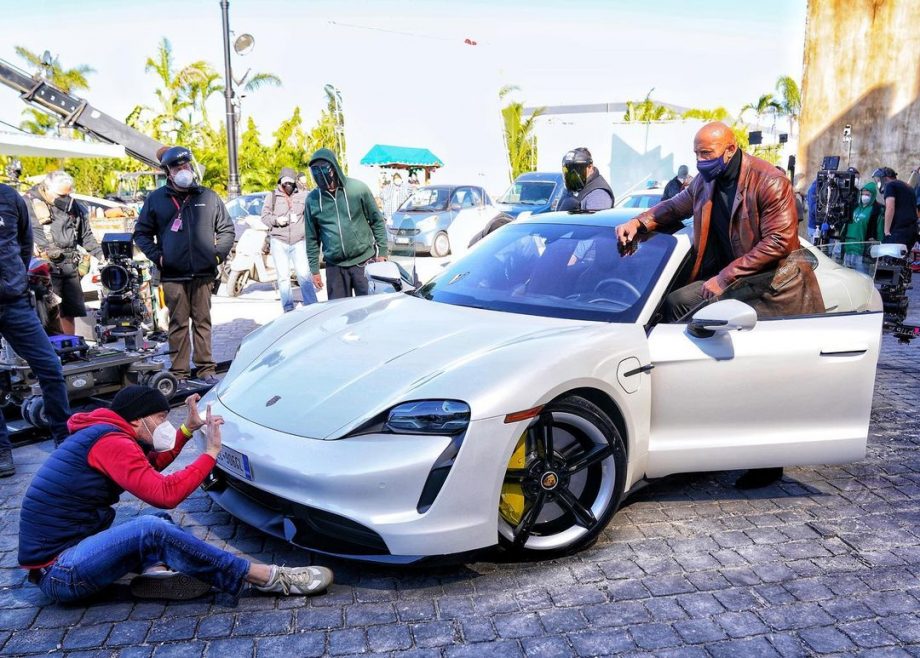 Admittedly it’s not a problem most of us are likely to ever encounter… Firstly, having a Porsche in the first place and secondly being so incredibly huge that we can’t fit in it.

The Porsche in question is a Taycan Turbo S: perhaps the most exciting car the German marque has released in recent memory. Don’t let the ‘Turbo’ designation fool you: this car is completely electrified, being the first all-electric Porsche production car. The ‘Turbo S’ model simply refers to the highest-performance version of the car, in line with Porsche’s traditional model designations.

All all-wheel-drive monster making 560kW and 1,050Nm of torque, the Taycan Turbo S is a blisteringly fast ‘Tesla killer’ of a car. Porsche Australia claims that it makes 0-100 in 2.8secs but independent testing would suggest that the Stuttgart brand is being conservative with that figure: according to Car and Driver, it’s the third-quickest car they’ve ever tested, only beaten out by the Porsche 918 Spyder and the Lamborghini Huracán Performante.

Credit where it’s due that The Rock still managed to get the shot for the film, but we feel sorry for him, honestly. Not being able to fit in the Taycan and experience its mind-boggling performance for himself must be one hell of a tease…