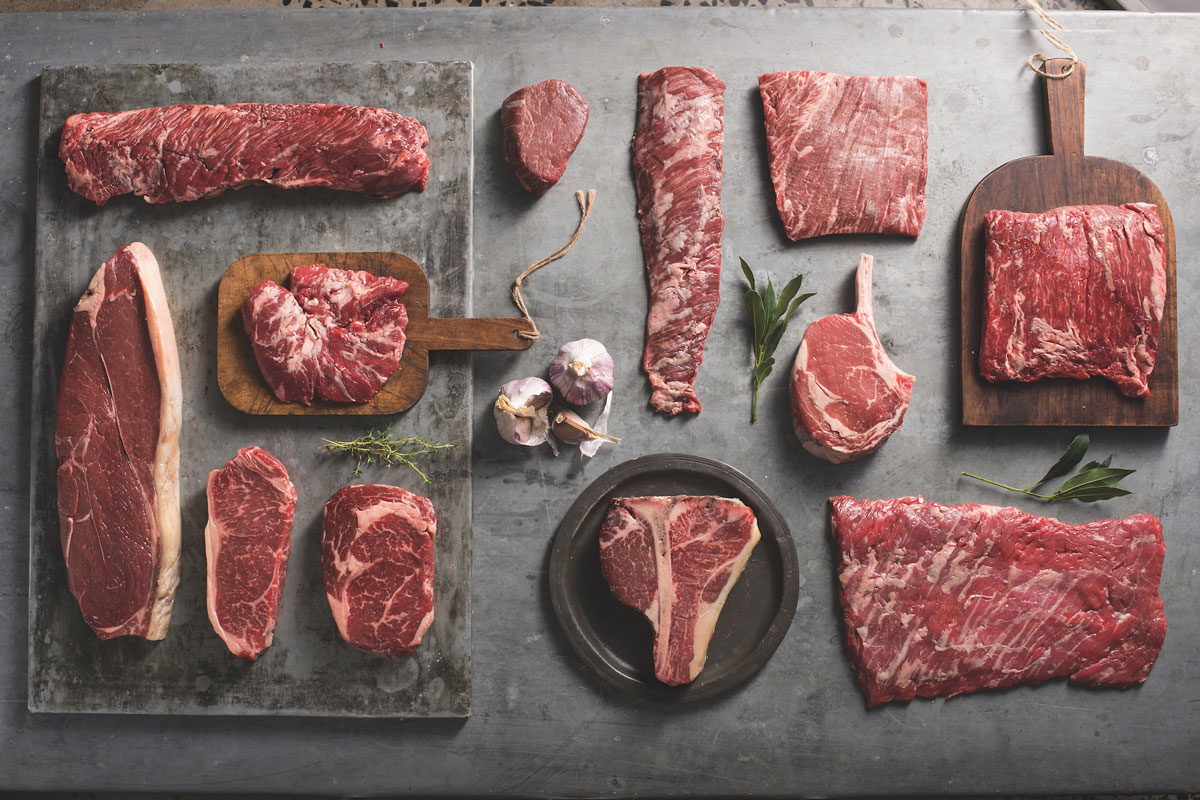 It’s been a tougher year than a well-done steak. But amid the cutbacks and crises, there have been moments of innovation. Some have been particularly inspiring.

After speaking in June to Vincent Lombino, Group Director of Food and Beverage at Ovolo Hotels, about the intriguing silver linings imminent for the luxury hotel industry coming out of Covid, this week DMARGE spoke to one of Australia’s better-known butchers: Anthony Puharich.

Mr Puharich is the Chief Executive Officer at Vic’s Premium Quality Meat – Australia’s premier meat wholesaling business. We spoke to him to understand how Vic’s has weathered this tumultuous year.

Though – like for most – 2020 pulled the ripcord on such notions as ‘normal profit’ (across most industries), it has also fast-forwarded innovation which may never have happened at such pace otherwise.

Demonstrating the adage ‘necessity is the mother of innovation’ Mr Puharich explained how his company got about 18 months of (e-commerce) work done in eight days.

“On the 24th of March.. restaurants, cafes, clubs, pubs, you name it had until midday to shut their doors on the back of Covid lockdowns,” Puharich told us.

This came on the back of an announcement by Scott Morrison and Gladys Berejiklian on the 22nd – a total of two days’ notice.

“We launched our online business on Wednesday the 1st of April. We launched very quickly… because on that 24th of March we saw our business fall off a cliff overnight.”

“I’m sure it’s a common story a lot of businesses will share – you never waste a good crisis. On the back of Covid, it’s amazing how quickly you can hustle.”

Funnily enough, Vic’s Premium Quality Meat ended up launching its e-commerce platform on April Fool’s Day. But not by design.

“This was by absolute coincidence… but we launched the business on April Fool’s Day.”

“I was that frazzled… I didn’t know whether it was April Fool’s Day or Christmas Day. I was in panic, survival mode, in the trenches, in the weeds, in a war zone, looking back the fact it actually launched on April Fool’s Day is a joke in itself because it’s been super successful for us and literally kept our head above water.”

“We had no expectations and no experience in this space. We didn’t have people within our business that were experienced in e-commerce. I didn’t have time to reach out and get advice from so called experts. So we just launched.”

“What we did know – and believe in – was in meat, and our quality and in our brand offering. We had all those big ticks but had never had any experience in this space.”

Despite that, Vic’s e-commerce platform “launched and did seven or eight thousand dollars worth of business in the first 24 hours with no clue, no advertising, a bit of social media and that sort of stuff and the rest is history.”

It hasn’t all been beer and sausages, however. Putting the decline into perspective Puharich told DMARGE Vic’s was (and is) a very significant business, dealing with a majority of the best-regarded chefs and restaurants in the country, with a customer base of 12 hundred hotels, airlines; top restaurants, pubs etc.”

This in mind, even though the e-commerce shift has been a success, it hasn’t been enough to fill the gap.

“There was 30 tonne of meat leaving our facility every day [pre Covid].”

“It’s helped farmers and producers keep going – without them the whole country would be f*cked and they do it tough as it is.”

“It’s also kept our staff in jobs and that was ultimately the number one priority – just to keep the business going and to keep our head above water and to keep things moving in the right direction.”

“30,000 since (that first order) in the last few months… there’s nobody that’s done that in meat in Australia… just as importantly it’s given us real opportunity and hope.”

Puharich also told DMARGE that even though the e-commerce shift was not exactly voluntary, he now considers it a crucial part of the business and an area for continued innovation and investment down the line.

“We’d been talking about it for 18 months but now it’s a reality and we can see that there’s a lot of opportunities around e-commerce. It’s something we’re going to massively focus on going forward.”

“We’ve discovered this new sales channel that never existed in our business. Before the bulk of our business relied on supplying chefs, restaurants etc. which we’re very grateful for (and we’ve still got a couple of retail stores in Victor Churchill and the Fish Markets) but now we’ve opened up our brand and our business to the whole country because we’re delivering nationally.”

“You don’t need to live in Woollahra or Sydney just to access it. You can be in Broome, Cairns, Wollongong, and have access.”

“Our logistics partner now delivers to 92% of the postcodes in Australia.”

Yes: there have been leaps and bounds, but in an industry saturated with cheap products and slick websites, it’s not necessarily easy to stand out.

But while the drop shippers of the world cut corners on their products and blow their entire budget on marketing, Vic’s is determined to stay true to its values.

“We’ve got e-commerce managers, SEO specialists, in-house content creation, photography, how to videos… it’s one thing to launch an e-commerce business; it’s another to keep feeding it.

“It’s like building a business from scratch irrespective of our 25 year’s experience in butchery and meat.”

“The last 6-7 months has just been survival, hand to mouth type stuff, now it’s about us being a lot more savvy and serious because now we’ve created a community. What we’re doing has really resonated with people so the question now is: ‘how do we keep the momentum going?'”

“That’s just not us [dropshipping]. We stand behind our product, we source it, cut it pack it, handle every single aspect of it. There’s… huge control with what we’re doing. We’re not outsourcing any aspect of what we’re doing outside of our logistics – and even that’s scary for us.”

“We’re trying to control every touchpoint and experience a customer has because unlike many others we need repeat business. We want people to buy from us more than once.”

“We want people to buy as regularly as possible and that’s a KPI we measure our success by – 64% of our customers are repeat customers, which is a big number in the ‘ecom’ world – they say the unicorn is to get at least 60% to be repeat business.”

How does Vic’s achieve this? “We try to understand our customers,” Puharich tells us. “What they like and don’t like, we refine the user experience, build that engagement and loyalty, and create content.”

What’s next for Australia’s meat scene? Only time (and sausage orders will tell). But with consumers turning more and more to subscription-based services for everything from razors and beer to music and entertainment, we’d bet our last pork chop this isn’t the last time you’ll hear about meat being sold online.