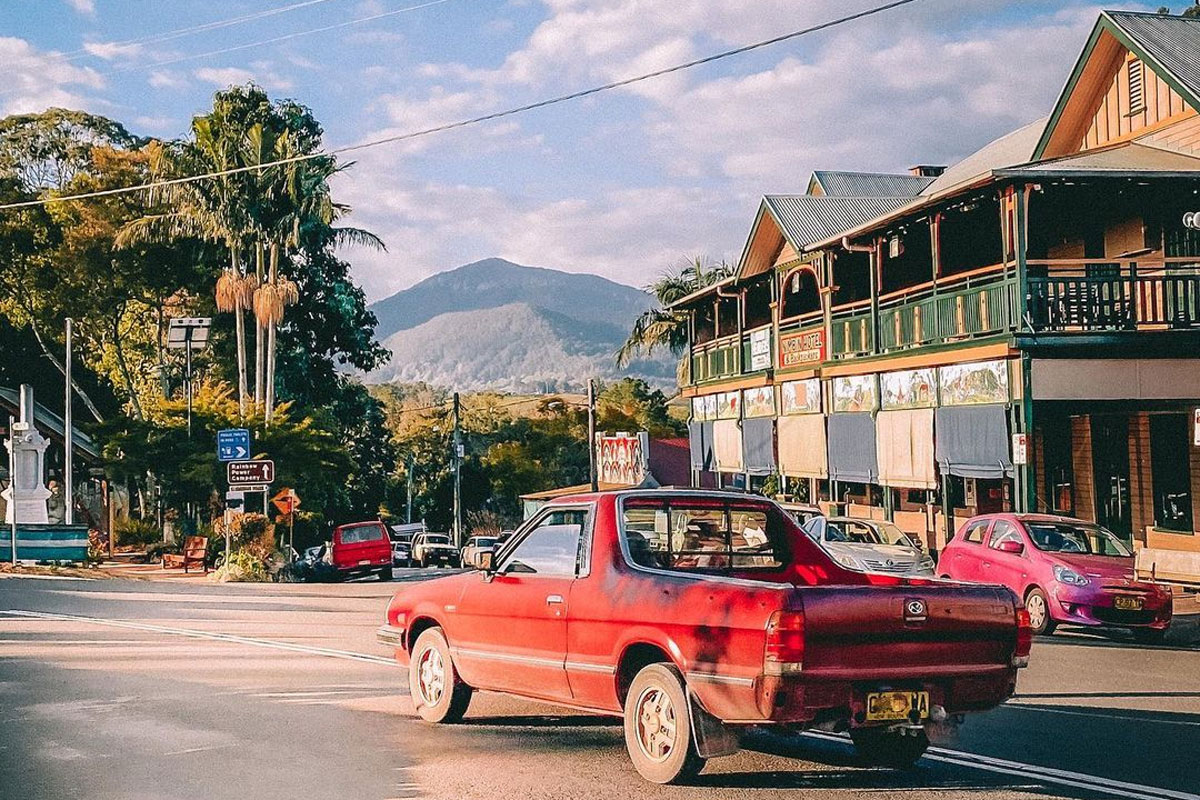 Forget Byron Bay; Nimbin has long been known as Australia’s earthiest paradise. Nature, waterfalls, hippies – everything a British trustafarian could dream of. Just over an hour’s drive inland from the iconic Byron, Nimbin is a small town of 1,477 people which – up until about 2016 – felt above the law.

Though it’s part of NSW and thus subject to the same drug restrictions as any other town in the state, there used to be “only one cop,” Michael Balderstone, who was president of Nimbin’s Hemp Embassy in 2018, told Vice.

According to Balderstone, police used to turn a blind eye to cannabis.

“Back in those days it was just cool, it was no big deal, and the smart police were happy to leave pot alone.”

Since 2016 there have been various crackdowns, with a new demographic burgeoning in nearby Byron (and by extension, to a degree, Nimbin). This, along with locals (allegedly) growing tired of the tourist hordes, and the proliferation of harder drugs, means Nimbin is no longer what it once was.

An anonymous user on internet forum Reddit recently made this claim, in response to a thread in the community’s r/solotravel community in which a user asked “where are the best solo travel places in Australia?”

“I’ve decided to be spontaneous (aka unorganised and last minute) and am looking to go away for 3-5 days hopefully between Christmas and early Jan somewhere within Australia (I live in Melbourne).”

“I was thinking Byron Bay but it looks like every hostel is completely booked out, which I guess I probably should have expected.”

“Is there any other recommendations people would have? Maybe something similar to Byron? I want something reasonably busy rather than some isolated town, as I’d like to meet new people. I’m 22 so also wouldn’t mind a younger crowd, and am probably looking for hostel rather than hotel.”

Though Nimbin might – in previous years – have been a great choice, when one user made that very suggestion (“Nimbin!”) in response to the above enquiry, another came in swinging with an alternative take.

“Nah, half the locals tryina to sell meth to tourists, the other half just want you to get out. Its not the same place it was 10 years ago, sadly.”

“It was really nice and friendly way back when. Used to be good weed, good mushrooms, very welcoming community.”

“I think it probably has something to do with the busloads of tourists Byron sends them every day – lots of well-off work visa kids looking for the ‘hippie experience.'”

“You arrive in the morning, walk down the main street, every second person offering you (very overpriced bush weed, meth, questionable molly, occasionally mushrooms), check out the little knick knacks stores, grab a coffee, and when the bus leaves in the afternoon everything shuts down, lights go off, people go home, do it all again in the morning. And its (i think, feel free to correct me) such a large part of that community’s income that they can’t just say ‘get out’… but it feels tired, overplayed, over-commercialised.”

“The people there are nice (shout out Dazza) and I don’t want to be rude, but it did feel like they just wanted to be left alone.”

This comment comes after a year of (much tabloid-exaggerated) controversy in nearby Byron Bay, with locals complaining about such heinous crimes as tourists from Sydney and Melbourne “wearing puffer jackets” and “ironing their jeans.”

In any case… Looking at Airbnb it also becomes clear that booking a place between Christmas and New Year’s Eve, whether in Nimbin, Byron or Mullumbimby, is almost impossible.

At the time of writing there is one Airbnb stay available in Nimbin over the time period the above Reddit user is thinking of travelling. By contrast, a search for late April returns up to 94 stays in Nimbin and the surrounding areas.

For those still set with their heart on the area, another user wrote: “I would agree with u/johnox, Byron is alright for all the shops, people and culture, but there are plenty of places nearby where it’s a little more relaxed, similarly beautiful and within a stones throw of Byron. Lennox is great, there’s also Bangalow, Ballina and Ocean Shores, as well as places like Mullumbimby and Lismore. All are great.”