After months of agony, it seems as if The Pangolin Parade is (slowly) wrapping up.

Not only do we have a vaccine, but we have multiple vaccine candidates. The big challenge now is convincing people of their safety and efficacy – and in the US, two leaders have taken different vaccines publically in order to assuage fears.

Outgoing Vice President Mike Pence and his wife Karen have received the Pfizer-BioNTech coronavirus vaccine, and now President-Elect Joe Biden has received the Moderna vaccine, getting the jab in front of TV cameras at a hospital in Newark, Delaware.

Watches reveal a lot about the men who wear them. Suitably, this overlooked horological detail from today’s vaccination reveals much about Biden’s character as well as the kind of presidency we can expect from the man going forward. 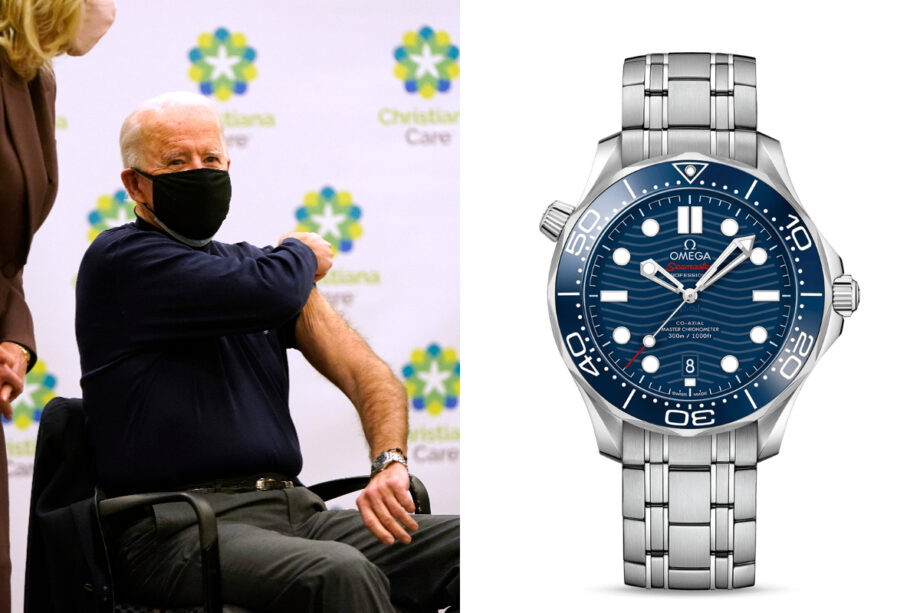 We’ve talked before about how most politicians (in democratic countries, at least) don’t like to wear expensive or flashy watches while they’re still in office because it makes them look out of touch. Bush Jr. and Clinton famously wore cheap Timex pieces, and while Biden’s OMEGA is slightly more expensive than a Timex, it’s still a rather understated watch.

Biden has a strong affinity for the 300M and owns multiple examples. He’s pretty consistently worn them for the last few decades and is rarely seen out in public with one.

In short? His taste in watches is subtle, consistent, and respectable – which hopefully will be a reflection of his presidency after four years of Trumpian chaos and flashiness.

First released in 1993, the 300M is for many the quintessential Seamaster, and one of the most iconic dive watches on the market. Biden’s 42mm model is crafted from stainless steel and includes a blue ceramic bezel with a white enamel diving scale. The dial is also polished blue ceramic and depicts laser-engraved waves, plus a date window at 6 o’clock. As the name suggests, it’s water-resistant to 300m, and features a helium escape valve at 10 o’clock.

Biden’s inauguration as the 46th President of the United States is scheduled for January 20th, 2021. While the size of Trump’s inauguration crowds was a sore point in comparison to Obama’s, Biden’s are likely to be smaller still thanks to COVID-19 restrictions.