“When surfing big waves, train to make the wave, don’t train to survive the wipe out.” 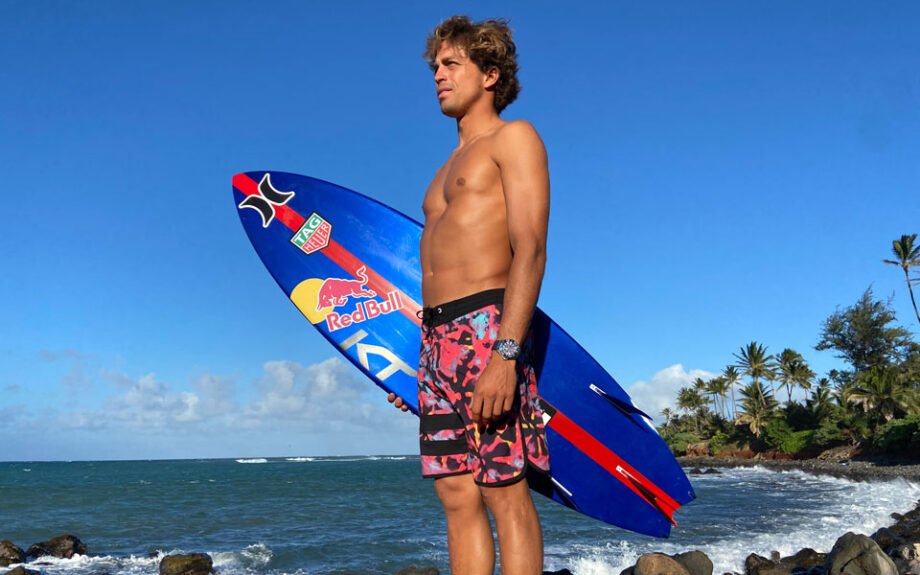 Kai Lenny may now be back in Hawaii, paddling into sky blue barrels at Jaws, but a month ago he was in a very different situation. Having wiped out in the frigid, murky water of Nazaré, he was held down for so long his tow partner was unable to find him before the next wave arrived, leaving Lenny to take three more massive waves on the head (before eventually being picked up).

Lenny managed to keep a hold of his GoPro the whole time, popping up briefly between each one, and the clip soon went viral, providing the general public with a rare first-hand account of what it’s like to be pummelled by such huge waves.

Though he’s been a name in big wave circles for some time now, Lenny has really burst onto the scene in recent years with his mind-blowing tow surfing antics at Jaws (see: this insane 20ft Jaws lip drop), and his penchant for taking foils places they’ve never been before.

The 28-year-old waterman from Maui also recently released a documentary series called Life of Kai, which offers a never before seen look into Lenny’s mindset, goals and challenges over the course of a big wave season.

DMARGE recently asked Lenny a few questions about how he trains for the intense scenarios he often finds himself in. His answers might surprise you. Rather than training specifically for wipeouts, Lenny told us the most useful fitness tip he’s ever been given is, “When surfing big waves, train to make the wave, don’t train to survive the wipe out.”

“When one strives to make every wave, the level of fitness naturally follows,” Lenny explained. “My level of fitness is so high because my goals are at the highest level. I also believe in changing up my workouts so that I can keep my body adapting to change.”

Lenny also told us what it feels like to be on the precipice of a mountain like wave at Nazaré: “Surfing the moving mountains of Nazaré, Jaws and Mavericks, offers a feeling like nothing I have ever felt. It’s a combination of fear, excitement, anticipation and the desire for more of the same, once the ride is done.”

“While I was making my hold down video holding on to my GoPro, I was really happy that I was getting the footage of giant walls of white water. It gave me hope as I was constantly beaten by wave after wave. I am stoked to be able to share this with others. I am very happy that my level of fitness allows me to be able to video under the circumstances.”

Lenny shared more about this experience (and the recent Nazaré ‘Century Swell’) on this week’s Late Drop podcast. Speaking to host (and fellow big wave surfer Jamie Mitchell) Lenny said, “Backside [surfing with your back to the wave] out there you can’t really tell where you’re going. There’s no wall like a traditional wave, it’s just a huge pyramid.”

“Nazaré… it [seems it] doesn’t ever lose its speed. It just seems like it just goes faster and faster and faster – almost as if when it breaks it finally lets go of that energy and… that whitewater… you can’t even stand up against it. If it taps you it’s game over.”

“My biggest wave that day [see: above] was a right and it was still kind of that mush burger [type wave] because it was barely breaking on Big Mama [the peak furthest out the back] but I can remember once that whitewater touched me it just vaporised me. At the end I was like almost in the channel but it just vaporised me.”

“There was no fighting it like some other big waves where that energy kind of shoots out then relaxes then shoots out again. It was just like getting run over. All my training I thought I did I thought was going to pay off in the summer didn’t help the way I thought it might have when I got hit.”

“Eventually when I went left when I had my GoPro, my thoughts were to get a couple of shots of what it might be like to surf out here… I tried to ride that wave as safely as possible. If you watch the land angle, I wasn’t taking any risks by going super deep, I was like: ‘I have a pole in my hand and… I’ll just get a couple of shots then I’ll get rid of the pole and go really deep and focus on making it.’ But the wave just sometimes peels outwards like that and sometimes you can take off on the shoulder and it still will get you.”

Suffice to say: he ended up getting pounded, and the rest is internet history. Lenny also revealed to DMARGE that whether surfing big waves or small waves, he often uses his Tag Heuer Aquaracer to help him get his timing right.

“The biggest waves of any swell come on a regular basis, called Sets,” Lenny explained. “Prior to paddling out or getting towed in, I study the timing of the sets that bring in the biggest waves. My TAG Heuer Aquaracer allows me to keep accurate time so that I can position myself in the lineup to catch the biggest waves on every set. I have looked at my watch while underwater although it is very hard to see since the wipe outs are so violent.”

Lenny then spoke to DMARGE about his relationship with TAG Heuer. Lenny said, “It’s a real honor to be an ambassador for TAG Heuer. The level of excellence that TAG strives for is in line with how I want to be as an athlete and as a human being. I live my life striving to be the very best that I can be. This means making sure that I have all of my equipment including my watch prepared, ready and tested so that when the Century Swell comes, I am ready.”