Lewis Hamilton’s Hair Remains The Greatest Miracle Since The Resurrection

The Eighth Wonder Of The World.

Lewis Hamilton is like the Benjamin Button of Formula One.

Not only has he become a more aggressive, vivacious driver as the years have passed by, but he also seems to age in reverse. Much of this has got to do with his hair, which at one point had almost completely disappeared. These days though it’s a very different story, the 35-year-old Brit rocking everything from cornrows, braids and even loose perms these days, his locks luscious and his hairline very much intact.

Last year, DMARGE spoke to hair loss expert James Nadin about Hamilton’s hair, who reckons “he’s had a hair transplant.. and a good one as well.” While most celebrity hair transplants are more tragic than terrific (we’re looking at you, Warnie), Hamilton seems to have bucked the trend.

Indeed, Hamilton might boast the most successful hair transplant of all time. Don’t believe us? The F1 champ shared a selfie on Instagram last night, which shows that he’s now capable of growing a full-on afro.

We’d like the number of his barber because it’s a seriously good look, and we’re still astounded that he went from looking (almost) like a 50-year-old used car salesman only a few years ago to looking like a male model in 2020. 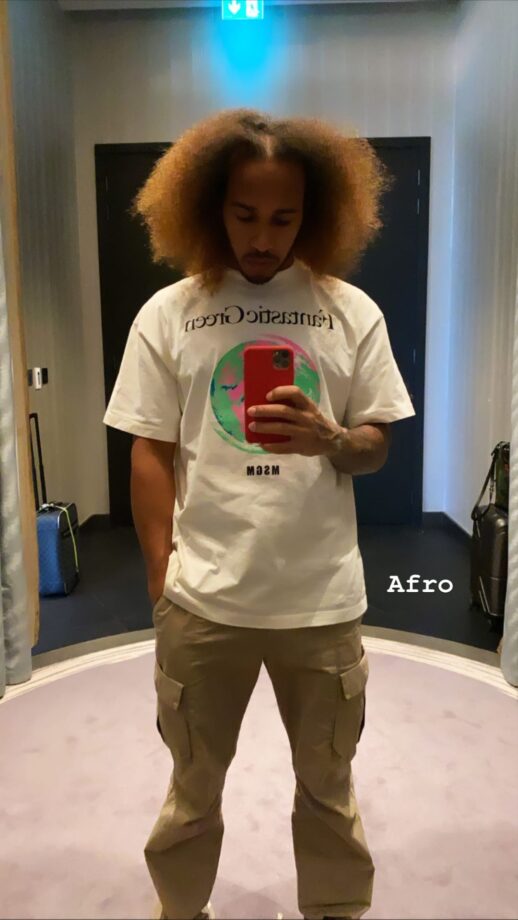 Hamilton’s got much more than hair growth to celebrate this year. The 2020 Formula One World Championship wrapped up on the 13th of December, with Hamilton nabbing his 7th Driver’s Championship and 5th Pole Position Award, as well as helping secure Mercedes’ 7th Constructor’s Championship alongside teammate Valterri Bottas.

Hamilton has now tied Michael Schumacher’s record for most championship titles and holds the outright records for the most wins, pole positions, podium finishes, points finishes, career points and most points in a season of all time. Phew!

RELATED: Former World Champion’s Warning For The Future Of Formula One

It’s not just his hair that’s seen a serious upgrade in recent years. Hamilton’s also shown himself to be quite the snappy dresser, using his platform to highlight black fashion designers in particular. Check out this suave patterned fit from Pyer Moss and this flamboyant double denim ensemble from Heron Preston he rocked this year.

Is your fight with your follicles not going so well as Lewis Hamilton’s? Don’t stress. Check out our guide to cool, practical hairstyles for balding men. (You’ll notice that an older Hamilton haircut appears in that list, too.)