Luxury Watch Expert Unveils Their Most Underrated Rolexes Of All Time

Few luxury brands command the same level of hype and adoration as Rolex.

The storied Swiss watchmaker is known throughout the industry for their incredibly exclusive sales tactics and legendarily long waiting lists. If you want to get your hands on their most popular models, you either have to build up a relationship with one of their authorised distributors (which usually means building up a purchasing history with them too) or pay through the nose shopping on the aftermarket.

But not every Rolex is as hard to acquire as a Submariner ‘Hulk’ or a GMT-Master ‘Pepsi’. For every popular model, there are scores that are overlooked and present a much more accessible way of joining the Rolex Club.

DMARGE spoke exclusively with Carol Altieri, the owner and COO of Bob’s Watches – the world’s largest online Rolex exchange and an expert on the brand – who shared her perspective and Bob’s Watches sales statistics on the most underrated Rolexes of all time.

The Day-Date – better known as the ‘President’ – “has always been the go-to for a solid gold dress watch,” Altieri relates. However, the gold Date / Datejust models, which look almost identical to the prestigious ‘President’, are an excellent deal – when you consider the insane speculation that the ‘President’ attracts.

“No one was paying attention to these gold Date models.  We were buying these at gold value – approximately 2,000 USD –  in the early days and I watched them slowly increase in value. About 4 years ago, Paul [Altieri, Carol’s husband and Bob’s Watches co-founder] and I went to the Sotheby’s vintage auction. While everyone was buying up the men’s sport models, I bought a couple of the gold Dates that were offered. Even factoring realized auction costs, we were able to resale with a 30% margin.”

While the ‘President’ has the additional functionality of a written day window, you have to ask yourself: is it worth an extra 12k? 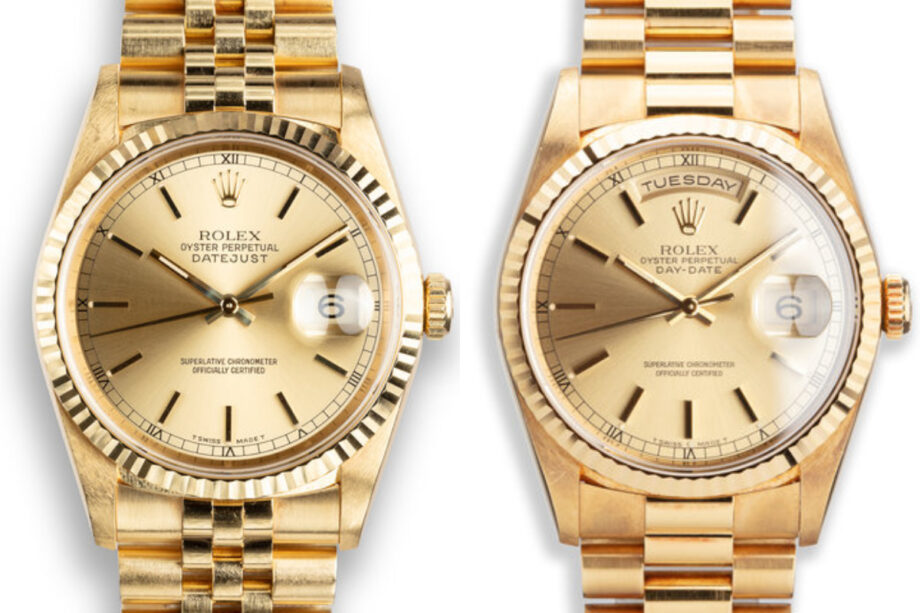 Two Rolex ref. 16238 models: a Datejust and a Day-Date. To the untrained eye, they’re virtually identical, but the Datejust is much cheaper.

Another model that Altieri touts as underrated is the Air-King. Also one of Rolex’s most understated models, the Air-King was first released in 1958 to honour RAF pilots who fought in the Battle of Britain. Virtually since its introduction, the Air-King was the cheapest model in Rolex’s line-up, cheaper even than standard Oyster Perpetuals (up until 2014 when the model was dropped and the Oyster Perpetual was once again the ‘entry-level’ Rolex).

In 2016 Rolex reintroduced the Air-King, available as a single model (ref. 116900), largely similar to its predecessors but differentiated from the Oyster Perpetual by its unique second-counting dial as well as a higher price tag.

“The newer model is selling over retail, so I’m not sure that would qualify as ‘underrated,’” Altieri demures, but she singles out the older ref. 5500 as an underrated investment: “[it’s] clean and a classic and you can buy in the $2700 range.”

Another underrated Air-King is the so-called ‘Domino’s Air-King’, examples of which can be found in a variety of different reference numbers and designs. International fast-food chain Domino’s Pizza has long given out Domino’s-branded Air-Kings to store managers to who hit $30,000 per week for four consecutive weeks in sales, among other requirements. Older models feature the Domino’s logo on the dial, whereas newer models incorporate a unique Domino’s logo link in their bracelet.

Naturally, this incongruous collaboration between a luxury brand and fast-food chain has given these Air-Kings a cult status, and demand a premium over non-branded references. However, they’re still relatively affordable for such a weird watch. In recent years, Domino’s has continued to raise the threshold for the reward (it used to be $10,000 per week, for example) so there’s less of these oddball Air-Kings getting given out, meaning that they’re steadily becoming more desirable. 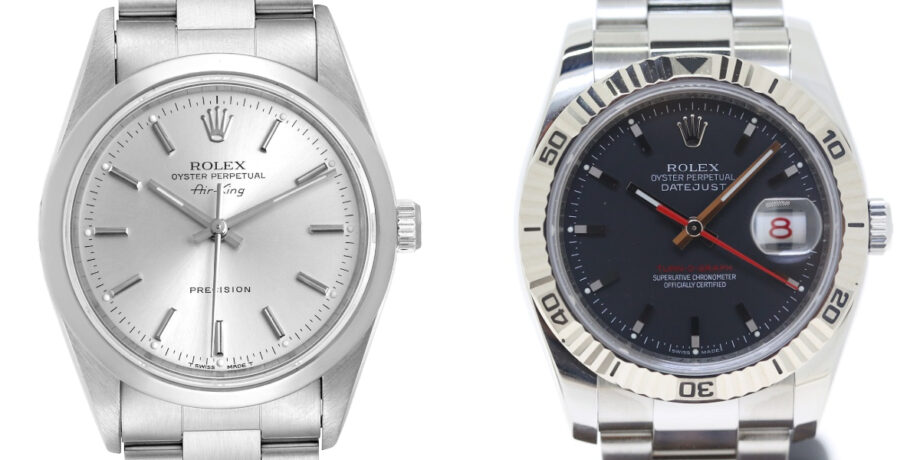 But Bob’s Watches pick for “the most snubbed watch in Rolex’s lineup” is the Datejust Turn-O-Graph model range, one of the oddest yet most influential models in the brand’s history.

“Launched in 1953, the Rolex Turn-O-Graph preceded the two other iconic Rolex watches that are famous for their rotating bezels – the Rolex Submariner and the Rolex GMT-Master,” they relate.

“Since the newly introduced bezel offered great practically by allowing wearers to time different types of events, the Turn-O-Graph is also considered to be the first Rolex tool watch.”

It was also the first Rolex pilot’s watch and even saw military use by the U.S. Air Force’s ‘Thunderbird’ aerobatic squadron, thanks to how novel the rotating bezel was. Indeed, Rolex capitalised on the association and began referring to all Turn-O-Graph watches in the American market as “Thunderbirds”, and even produced a model with the squadron’s insignia.

After a long period of discontinuation, Rolex reissued the Turn-O-Graph in the 2000s, retiring the model once more in 2011. There are surprisingly few on the ground – perhaps because it’s never been one of their most popular models – so if you can find one, they’re a great alternative to a classic Datejust or even one of Rolex’s other tool watches.

Just because a model is underrated doesn’t mean it’s necessarily a good investment opportunity. While some ‘underrated’ or ‘cult’ models like the gold Datejust or the Domino’s Air-King are slowly appreciating in value, others like the Turn-O-Graph or base-model Air-Kings are staying pretty steady.

But while investments of passion can potentially be rather profitable – for example, this whisky barrel investment scheme – buying fine timepieces isn’t just an exercise in money-making. The real value in these underrated Rolexes is that they give real watch lovers who might be crowded out by clout chasers or speculators the opportunity to own a piece from the brand for themselves.

Our advice? Don’t follow trends. Wear what you want to wear, invest in what interests you, and happiness will follow.