“It’s located one level above passengers – so no one really knows about it.” 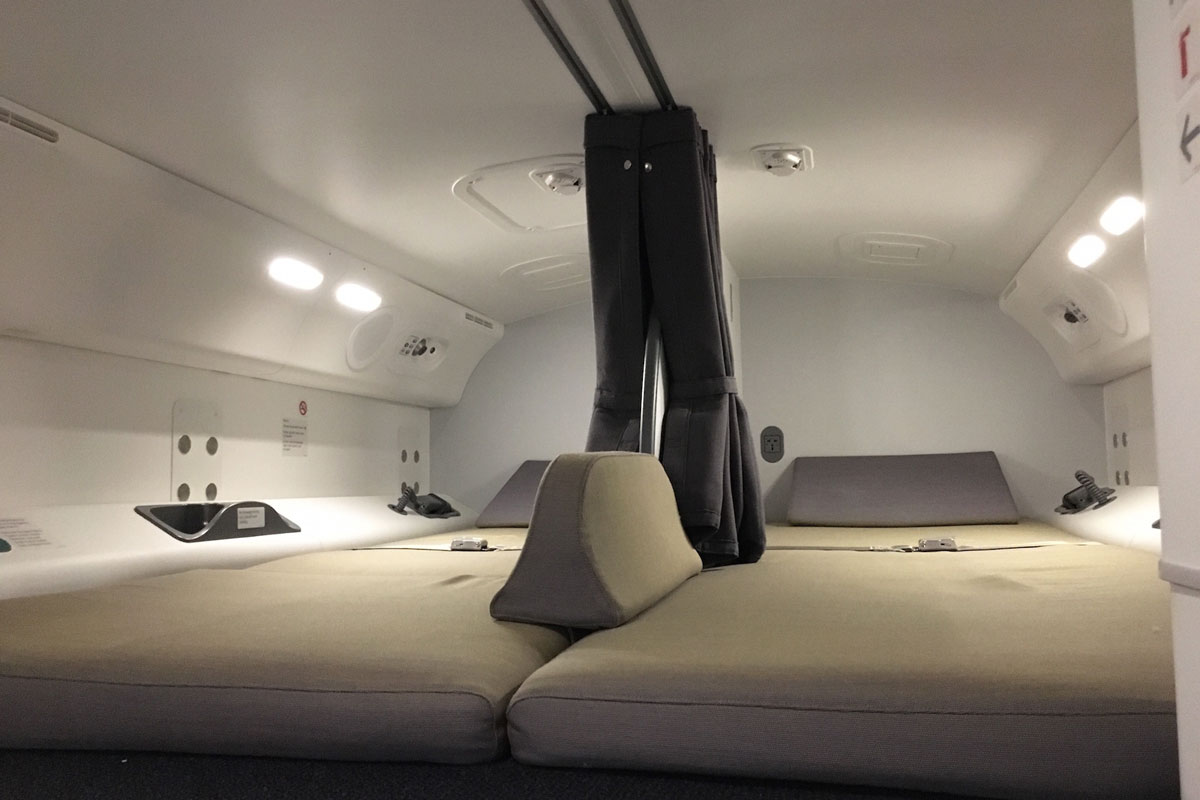 There’s a secret 787 compartment you probably don’t know about. Business-class blogger Zach Griff recently flung the doors open and shed light on it, giving his Instagram followers a sneak peek into life Up The Stairs.

Inspired by said video, in which Griff is permitted entry into this “secret compartment… that’s typically off-limits to passengers,” DMARGE got in touch to seek further insights about this “out of sight” zone which requires a code to enter.

But first: context. If you haven’t already seen the video, which is filmed in one of American Airlines’ 787 Dreamliners, watch it now (see below).

“The staircase leads up here…to the crew rest,” Griff says in the clip. “There’s a bed here.. another bed here… a third one… some oxygen in case of an emergency… and then three more beds.”

This little known compartment is down the back of the Dreamliner, and is designed as a space that crew can rest in during long haul flights.

It doesn’t just exist on American Airlines either. Griff told DMARGE “most large international planes – like the double-decker Airbus A380 and Boeing 787 Dreamliner – have dedicated spaces for the crew to catch some sleep that are completely off-limits to passengers.”

“The Boeing 787 Dreamliner is a plane designed for long-haul international flying,” Griff added. “On these long flights, the pilots and flight crew need to take a rest — they can’t physically work for ten or more hours without a break.”

As for its secret nature, Griff told us, “The crew rest is easily the coolest part of the entire plane. It’s completely off-limits to passengers, and only certain crew can use it during flight.”

“It’s also really interesting that it’s located one level above passengers – so no one really knows about it. Even when flight attendants use it during flight, they do so very discreetly and they don’t let any passengers inside or know about where they are going.”

Griff also told DMARGE this space been used for this purpose, to his knowledge, ever since American Air received the 787 jets: “Absolutely, every long-haul flight includes a break period for the crew and the crew head to the crew rest every time they have a long break.”

Instagram posts from as far back as 2015 show flight attendants showing off their crew rest areas (on various carriers), with captions like, “When your day of work involves a legal requirement to take a three hour nap.” There are only 28 posts with the “crewrestcompartment” hashtag though. This, together with Griff’s comments, leads DMARGE to believe crew rest compartments are still a relatively little known phenomenon.

All Dreamliners have at least one crew rest above the passenger deck, Griff informed us, and, “there are actually TWO secret crew rests on most Boeing 787 Dreamliners” with one located right behind the cockpit and another much larger one all the way at the back of the coach cabin (the one featured in Griff’s Instagram video at the top of the page).

What’s next for crew rest areas? Watch this (air) space.