Incredible Photo Shows Where Airlines ‘Hide Their Aircraft’ During A Pandemic

The return of international travel remains firmly ‘up in the air.’ 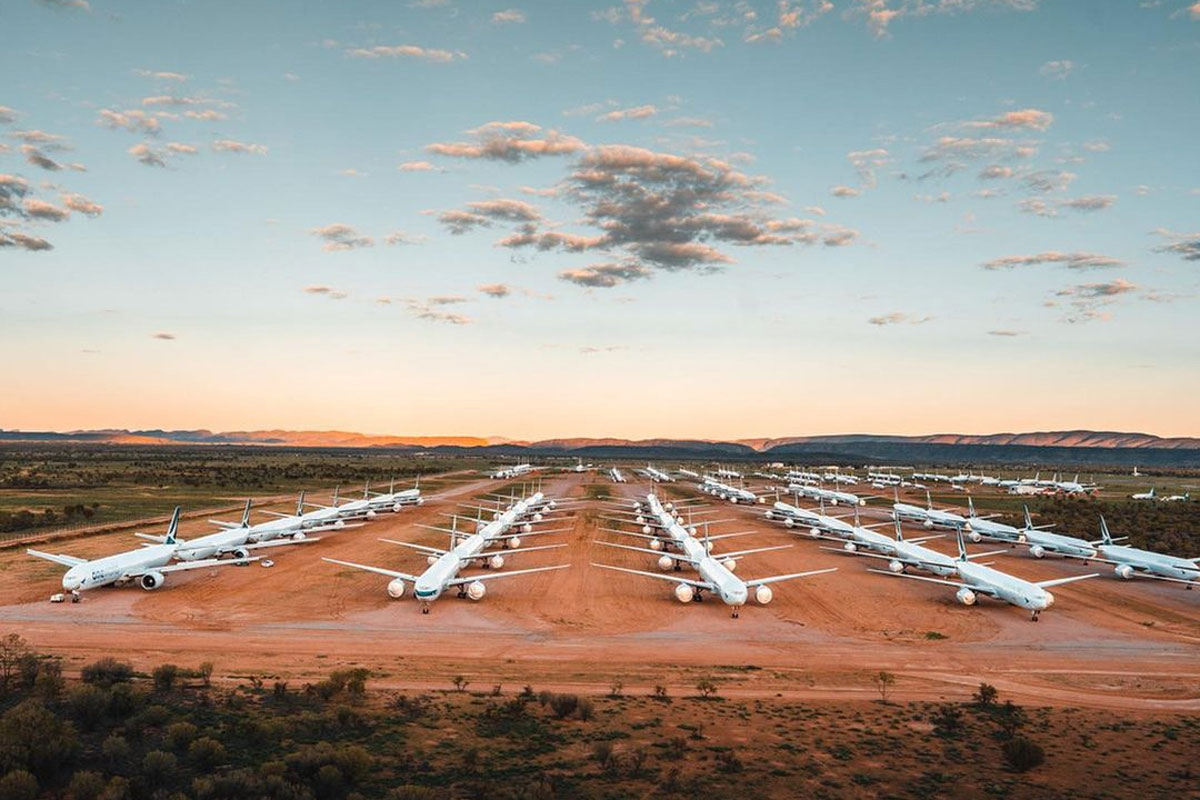 The aviation industry was devastated in 2020. That’s not going to be immediately rectified in 2021. Though there are positive signs a recovery is imminent, it will be a long, turbulent road until we once again reach the lofty heights (and huge passenger numbers) of pre-Covid 19 travel.

Demonstrating this in startling fashion, is a recent photo taken by frequent flyer expert and Flight Hacks founder Immanuel Debeer. Posted to his Instagram account on Sunday, the image (along with a bunch more, which you have to click through to see) has evoked a great sense of loss in many of his followers, bringing home how hard aviation has been hit by Covid 19 in a way statistics fail to convey.

“If you wondered where airlines hide their aircraft during a global pandemic; I’ve found them! These jets are all wrapped up in the middle of the desert,” Debeer captioned the post.

“Why? Corrosion is an aircraft’s worst enemy so when they can’t fly, finding a dry environment is key to their preservation.”

“Great shots of a sad sight,” wrote another.

Other users asked Debeer how he took the pictures, with one suggesting it may have been via drone. “Haha no way you could fly a drone around the airport! I circled around in a chopper,” Debeer responded.

“No doors [in the chopper]… just me hanging in a seatbelt. Good thing it didn’t pop open or they would have had to scrape me off one of those A380 wings.”

“When you come in to land for the first time it will give you chills to see so many airplanes parked in the dirt,” Debeer told DMARGE. “It leaves an impression, and ASP isn’t even the biggest storage facility.”

“Even if you’re no an #avgeek, airplanes are awe inspiring machines that demand respect no matter if you ‘like’ them or not. These machines are one of the most significant things that have impacted humanity in such a big way.”

“They provide a gateway to the world and whatever comes with that freedom. To see them parked up in the sand is pretty sobering and shows the vast destruction our governments around the world have caused the aviation and travel industry.”

This is not the first time the Asia Pacific Aircraft Storage facility in Alice Springs has been photographed. Plane spotter @aviation_tommy_ spoke to DMARGE last year after taking some mind blowing photos of his own.

“Many aircraft from different Asia[n] countries have been sent to Alice Springs; this is sad… to see to be honest, but it was a good experience to see these birds in the middle of Australia.”

Debeer’s photos come at a crucial moment for airlines. Though last year was brutal, this year could be even trickier.

RELATED: Photographer Captures One Of The Saddest Moments In Aviation History

CNBC reports, “Passenger volume fell from over 2 million daily at the beginning of March to a bottom of about 90,000 in mid-April, according to TSA checkpoint statistics, as stay-at-home orders and travel restrictions hit.”

“While that number has since recovered, even the busy holiday season saw passenger volume at less than half what it was a year ago, with 1.2 million people traveling on Dec. 27, versus 2.6 million last year.”

Through initiatives like Antarctica Flights and Uluru sightseeing tours have helped bring Australian airlines like Qantas a little extra revenue, with international flight still very much up in the air, Australian airlines will remain budget-conscious this year, earning money largely via domestic flights and on-ground frequent flyer schemes.

According to the ABC, Qantas reported a $1.96 billion loss in August 2020, down from 2019’s $840 million profit. Virgin Australia notably went into voluntary administration in early 2020 and will continue to rebuild itself as a “leaner, meaner” airline in 2021, with airline advisors telling DMARGE it will take between 2 and 5 years for the airline to become profitable again.