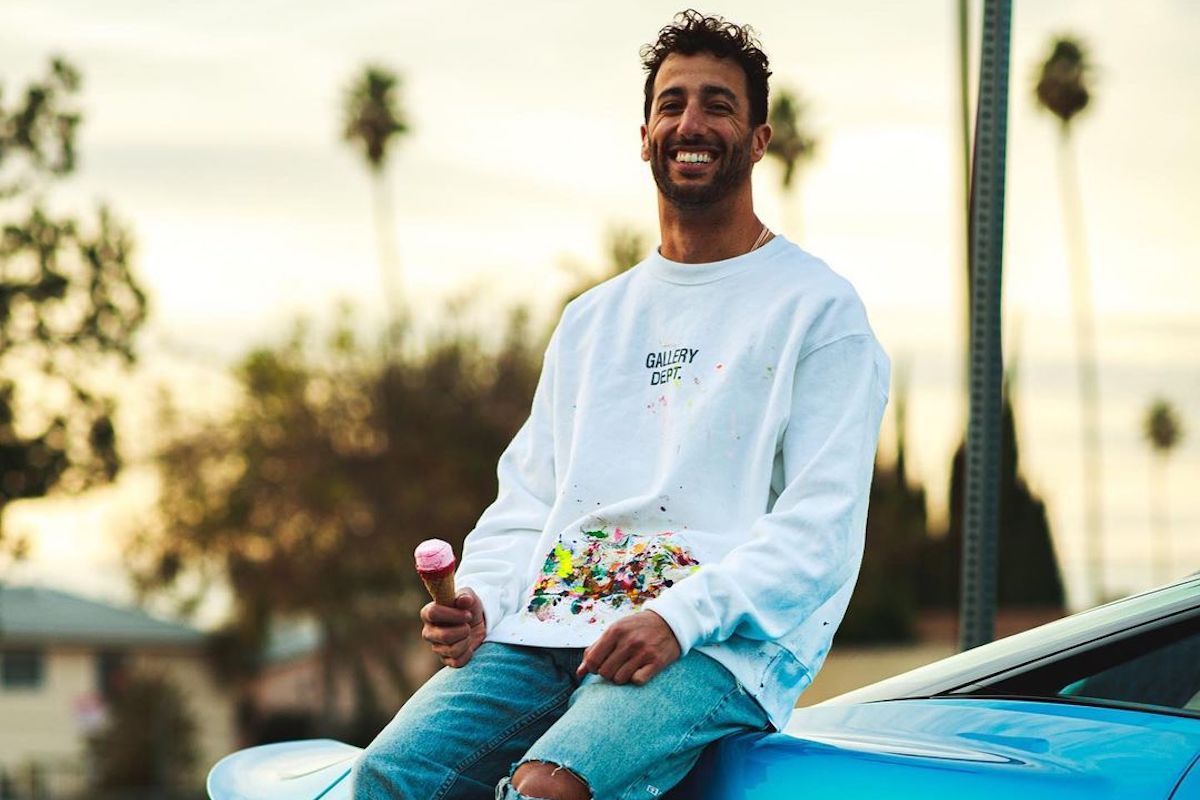 Things are looking up for Daniel Ricciardo.

‘The Honey Badger’ wrapped up a solid 2020 – which saw him come fifth in the 2020 Formula One World Championship’s Driver Standings – by announcing he would be leaving his current team, Renault, for greener pastures over at McLaren. Ricciardo really struggled to find his footing with the French team, so the news of a move to McLaren has been exceptionally exciting for Australian F1 fans.

While there’s no doubt that Ricciardo’s move to the Mercedes-powered British team was primarily motivated by a desire for more podiums, there’s another perk of the move he was eyeing off: “the company car,” as he told The Fast Lane podcast late last year.

F1 drivers are usually contractually obligated to drive one of their manufacturers’ street-legal cars when they’re not on the track: in Ricciardo’s case, that meant tooling around in a Renault Megane RS Trophy. With the move to McLaren, he’s swapped the hot hatch for a supercar – the new McLaren 765LT.

The 765LT, which was unveiled last year, is a track-focused variant of the already quick 720S. It features an updated body that produces more downforce than the 720S and a reworked engine which makes 563kW and does 0-100 in 2.8 secs. That’s 342 more kW and 2.9 secs faster than the Megane, for reference.

Ricciardo’s been enjoying driving his new pride and joy around California in-between F1 seasons, joking that “the first date” with the car had him “nervous but excited” and that for their “second date” they “went for ice cream”. It’s all very cute, but also demonstrates a tough home truth about Britain vs. France.

Namely, that Britain is better – when it comes to making cool cars, at least.

Now, it’s not entirely fair to compare a hotted-up version of a passenger car to a hotted-up version of an already formidable sports car – especially when you consider that the McLaren costs almost ten times what the Renault does. It’s also worth pointing out that the French do a better job of making everyday motors than the Brits do. We’d rather a Citroën C4 or Peugeot 308 over a Vauxhall Astra any day of the week.

But when it comes to performance vehicles; ‘bedroom poster’ material, the UK has France beat.

Other than the aforementioned ‘hot’ versions of passenger cars like the Peugeot 308 GTI or the Renault Megane RS, France doesn’t have many credible performance marques these days. You have the recently-resurrected Alpine, whose A110 initially attracted good reviews but has failed to make a significant impact in the performance car world, or Bugatti – who make truly amazing performance cars but aren’t really that French – founded by an Italian, owned by Germans, Bugatti are as French as a sauerkraut pizza.

We’d also argue that Bugatti is to cars what Jacob & Co. is to watches: impressive on paper, but garish, excessive and tasteless when push comes to shove.

Compare that to the UK, which is home to a number of prestigious performance marques with wide critical acclaim: Ariel, Aston Martin, Caterham, Jaguar, Lister, Lotus, Noble, TVR, and of course, McLaren. That’s to say nothing of Britain’s other primo offerings like Bentley, Land Rover or Rolls-Royce.

It’s also worth pointing out that a majority of F1 teams are actually based in the UK, too. Seven of the ten constructors – including Alpine, which is what Renault has rebranded to in 2021 – are either entirely or partially based in the UK. The rest are based in Italy. (Italian vs. British cars is another debate entirely…) It’s further evidence that it’s Britain, not France, that’s top dog when it comes to all things four wheels.

The reality is that French performance cars are just nowhere near as aspirational as British performance cars. People buy Bugattis because they’re status symbols, not because of some French flavour. Compare that to Aston Martin, MINI or Rolls-Royce, where that British character is essential to their appeal. French cars are just not as cool as British cars. Let’s put it this way: F1 drivers don’t angle for Renault because they want to drive a Renault as their company car.

Of course, we’re also talking about the state of play in 2021. You don’t have to look far back to see how far the tables have turned, with awesome cars like the Citroën DS or Matra Murena on one side and the dumpster fire that was British Leyland on the other. It’s all swings and roundabouts.

It’s also worth pointing out that many British car brands are just as guilty of the things we’ve accused Bugatti of being. Volkswagen might own Bugatti but they also own Bentley. Lotus is owned by Geely and their cars use Toyota engines. BMW owns MINI, Tata owns Jaguar, Stellantis owns Vauxhall, and McLaren’s F1 engines are provided by Mercedes… Need we go on?

Ricciardo for his part is pretty brand and nationality-agnostic when it comes to cars. His multiple continent-spanning car collection contains everything from an Aston Martin Valkyrie to a Ford F-150 Raptor and a Porsche 918 Spyder as well as his “company cars”. Of course, for a driver like him, nothing really compares to an F1 car.

Ricciardo’s first outing for McLaren, alongside his talented young teammate Lando Norris, will be at the 2021 Bahrain Grand Prix on the 28th of March, as the Australian Grand Prix has been pushed back tentatively to November due to the ongoing COVID-19 crisis. Travel restrictions have also seen the Chinese Grand Prix indefinitely postponed, with Imola returning to the F1 calendar in its slot, formula1.com reports.