Sticking it to the man…

Only established in 1985, Dolce & Gabbana is a relative newcomer in the world of luxury brands. Despite this, the Milanese luxury fashion house has had an enormous impact on the industry and is firmly a part of the luxury pantheon alongside other, much older Italian brands like Bulgari, Fendi and Gucci (just to name a few).

Its 36 years of existence haven’t all been plain sailing, however. D&G owned the first decade of the 21st century, described by The New Yorker as “[being] to the two-thousands what Prada was to the nineteen-nineties and Armani was to the nineteen-eighties – gli stilisti whose sensibility defines the decade.”

D&G have yet to again reach those lofty heights. Indeed, a number of scandals in recent years have threatened to sink the brand entirely. A number of controversy-generating advertising campaigns – most notably a 2018 promotional video that was perceived to be mocking Asians – have soured the brand’s image. But the brand has tried to shake off that insensitive reputation… Opening up another can of worms in the process.

Near the end of 2020, D&G shared a short beauty campaign on their Instagram account, which showed a diverse array of men wearing and presenting makeup, such as lipstick and eyeshadow palettes. The luxurious images were lauded by many, but also attracted fierce criticism of a whole other kind. 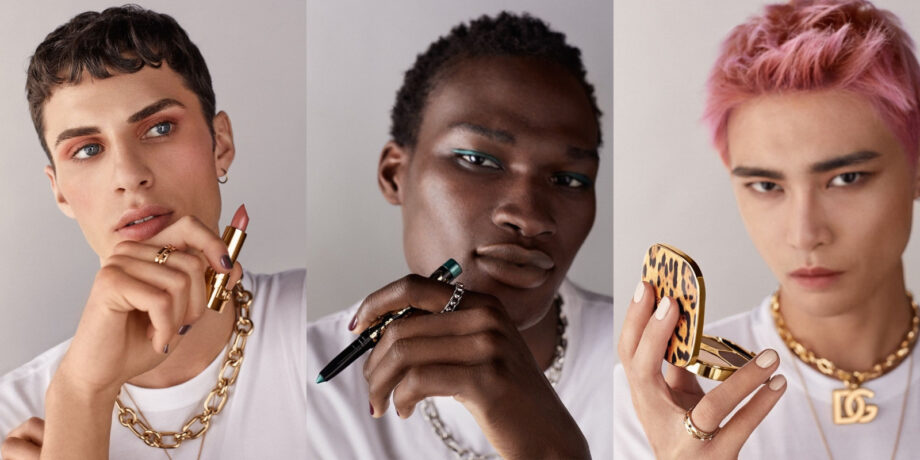 D&G’s models showing off lipstick, eyeshadow and nail polish, as well as accessories from the brand.

A deluge of outraged commenters sounded off across the six Instagram accounts. One Russian commenter was particularly unhappy: “Painted men? What is fashion.”

Not all reactions were negative, however. One commenter wrote:

“The fact you chose a man for this advert is a sign of the wonderful times we live in and how beautiful this gentleman looks is testament to the fact that gender should not be stereotyped.”

Another Italian commenter put it more bluntly, relating that “the comments of all the homophobes under this post are like a circus.”

It shows how there’s a degree of ‘damned if you do, damned if you don’t’ when it comes to luxury brands attempting to be more progressive. On the one hand, if you don’t make efforts to be more diverse, you’ll be criticised for being conservative, privileged or lacking innovation. On the other hand, try and be more progressive and there will always be people who’ll accuse you of tokenism – or worse, your customers will prove to be more conservative than your brand and reject your efforts.

Sure, criticism comes with the territory in this hyper-competitive, high profit-margin industry, and it’s unlikely that this social media buzz will result in any significant impact to D&G’s bottom line. Hell, celebrities kept wearing D&G after their 2018 misstep, much to the chagrin of some, as this Flare article reveals.

Still, credit where credit’s due. This new campaign proves that D&G are moving in the right direction, rather than letting their past hurdles trip them up. It also has to be said that it’s quite a classy campaign. The men aren’t aggressively made up: it’s subtle; well-executed; the kind of thing that real men and women might actually wear.

Indeed, this sort of ‘divisive’ campaign might just be what D&G needs – a “let them talk” marketing strategy, as one commenter pointed out.

2020 was a tough year for retail, fashion and luxury, with most luxury brands taking a big hit to their bottom line thanks to COVID-19. Unlike many other luxury houses, D&G is independent – which has arguably helped them weather the storm better than the big luxury conglomerates. Time will tell if 2021 will see the industry return to an even keel.