“Baseball, hotdogs, apple pie and Chevrolet” was one of the most famous ad campaigns of the 70s; its humble simplicity an ode to the joys of American life.

A more accurate phrase to describe America these days might be “vaping, burgers, hard seltzer and Tom Brady”. The 43-year-old football legend, New England Patriots stalwart and now captain of the Tampa Bay Buccaneers isn’t just one of the most famous athletes in the United States, but it’s hard to think of another athlete who’s more quintessentially American. There are few celebrities bigger than him… Either when it comes to star power or fitness prowess.

It’s also hard to think of a film that’s more American than Top Gun. The 1986 action film starring Tom Cruise, which boasts perhaps the best flight scenes (and soundtrack) of any film ever, has no doubt been a boon for the United States Navy’s recruitment numbers over the years – and has singlehandedly solidified the fighter jet as the apogee of cool.

So maybe it’s not surprising that the most American athlete ever would wear the most American watch ever, which references the most American film ever. Ahead of Tampa Bay’s game against Washington yesterday, Brady took to Instagram to show off his IWC Schaffhausen Pilot’s Watch Chronograph Top Gun Edition “SFTI” (ref. IW389104) worth around 15,000 USD. 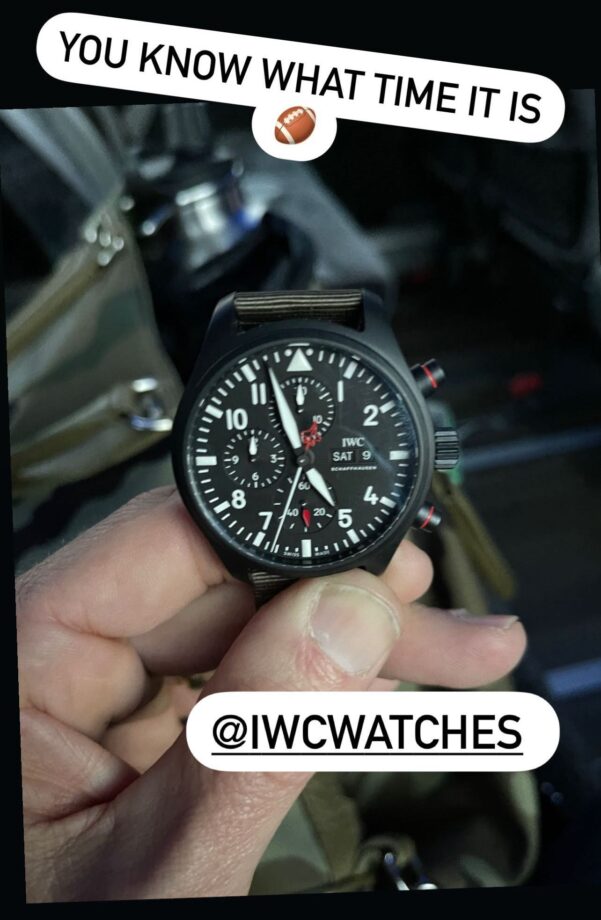 One of 2020’s hottest watch releases, the ref. IW389104 pays homage to the US Navy’s Fighter Weapons School, which is better known as TOPGUN: the elite flight school that inspired the iconic 80s movie of the same name. Limited to 1,500 pieces, the ref. IW389104 is easily distinguishable from other IWC pilot’s watches thanks to its caseback engraved with the movie’s logo and its seconds hand, which features a little Navy jet. Cute.

IWC might be a Swiss company, but it has a uniquely American history. The firm was founded in 1868 by an American engineer and watchmaker, Florentine Ariosto Jones, who wanted to combine the quality of Swiss craftsmanship with the engineering technology and innovative spirit of American watchmaking. Another core part of IWC’s identity has been their history of making pilot’s watches, their watches gracing the wrists of pilots from many different air forces in WWII including the British RAF.

Brady is one of IWC’s most prominent brand ambassadors, having signed a deal with the luxury watchmaker last year, joining a star-studded roster that includes names like Bradley Cooper, Rosamund Pike and Lewis Hamilton. The quarterback is rarely seen without an IWC watch of some sort, but it’s clear that their pilot’s watches are his favourites: check out this rare Big Pilot “Rodeo Drive” he was wearing last year.

Brady’s Buccaneers handily defeated Washington 31-23 yesterday in Maryland in their wild card playoff. Next up for them will be a divisional playoff on either the 16th or 17th of January, with further details yet to be determined.