From Brady to LeBron. 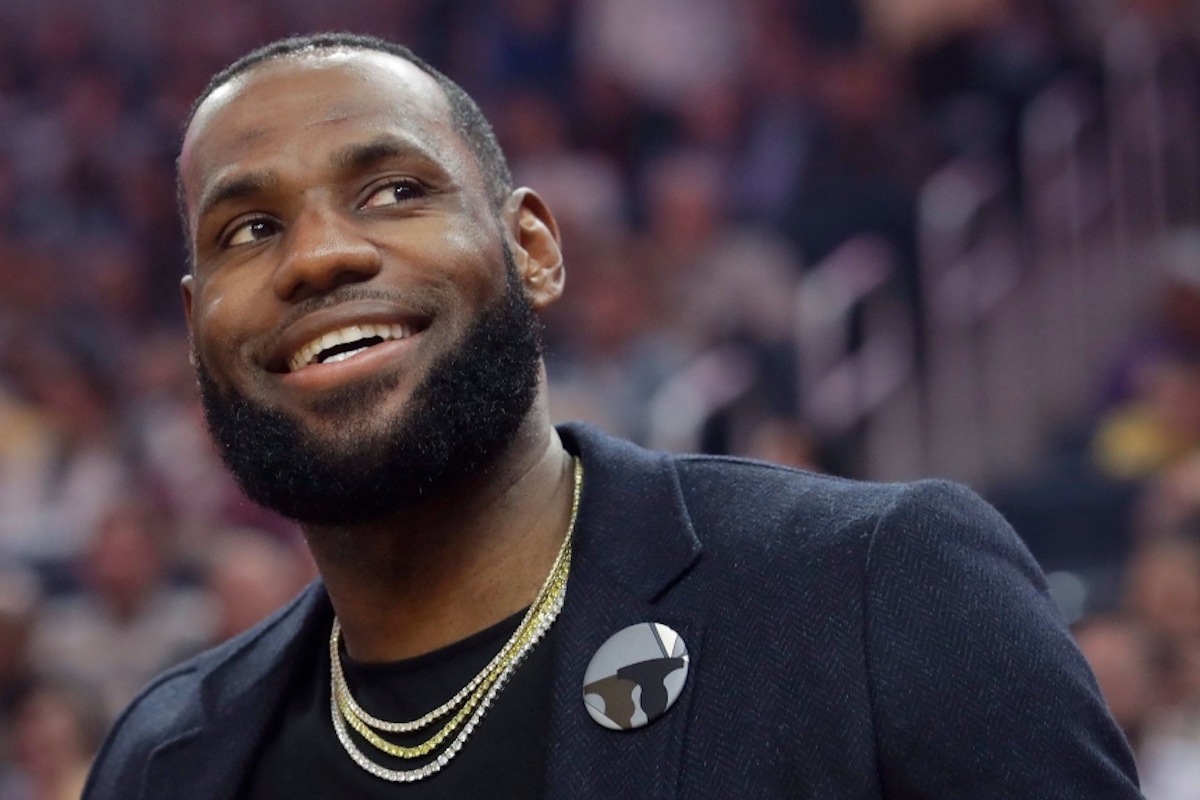 It’s always fascinating to see athletes get really passionate about sports other than their own, or what they do to stay fit when they’re not competing.

Michael Jordan famously retired from basketball in 1993 to pursue a short career in baseball, Kelly Slater is a surprisingly good golfer… Australia’s very own Ellyse Perry astounded the sporting world by debuting for both the national cricket team and the national football team in the same year and at the age of 16. Phew!

Perhaps it’s not that surprising that world-class athletes are good at sports outside of their chosen discipline, but it’s still intriguing when it happens.

Formula One drivers are perhaps the biggest dark horses when it comes to ‘backup sports’. People don’t tend to think of F1 drivers as athletes in the same way that other professional sportspeople are, but actually, they’re some of the fittest athletes on the planet – and when they’re not behind the wheel, they tend to surprise people with their skills.

Case in point: McLaren driver and certified Aussie legend Daniel Ricciardo, who can putt like a pro and land three-pointers so effortlessly fans have suggested a career change.

Ricciardo’s exploits inspired us to keep digging and see what other ‘backup sports’ the world’s best athletes like to dabble in and there was one consistently popular one: cycling. Yes, it seems as if many of our favourite sports stars love to cycle in their downtime, both for fitness and for fun. 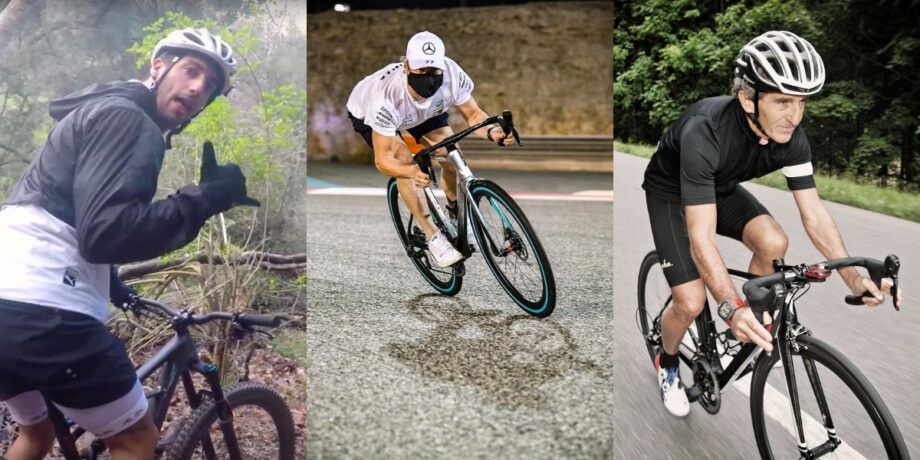 DMARGE spoke exclusively with Finnish F1 driver Valterri Bottas – world #2 and Lewis Hamilton’s teammate at Mercedes – who, like his on-track rival Ricciardo, regularly ditches four wheels for two. Indeed, his love of cycling is reflected even in his choice of car:

“At the moment in Monaco [where he lives] I drive a Mercedes-AMG GLC 63 because I do quite a bit of cycling… so if I want to take the bikes somewhere, it’s nice to have an SUV.”

Considering Bottas could have his pick of any car in Mercedes’ expansive lineup, that he prioritises something he can fit his bikes in says a lot about how much he must love the sport. (He’s also dating Australian professional cyclist Tiffany Cromwell – more evidence of his passion for cycling…?)

Another F1 driver who loves bikes is legendary French driver Alain Prost. Indeed, when the four-time Formula One Drivers’ Champion collaborated with Richard Mille on a signature watch model, they created a watch with a manual odometer because Prost wanted an easy way of keeping track how many kilometres he’s cycled when he’s on the go. Niche, but it goes to show how seriously ‘The Professor’ takes his hobby.

But it’s not just F1 drivers who like to cycle. Tom Brady, the NFL’s brightest star and recently-minted seven-time Super Bowl Champion can be regularly spotted on a bike, as can Irish MMA champ and self-proclaimed ‘face of the fight game’ Conor McGregor, who recently completed an ocean voyage on water bikes with Princess Charlene of Monaco (herself an ex-Olympic swimmer) to raise money for charity. The connections keep on popping up, don’t they? 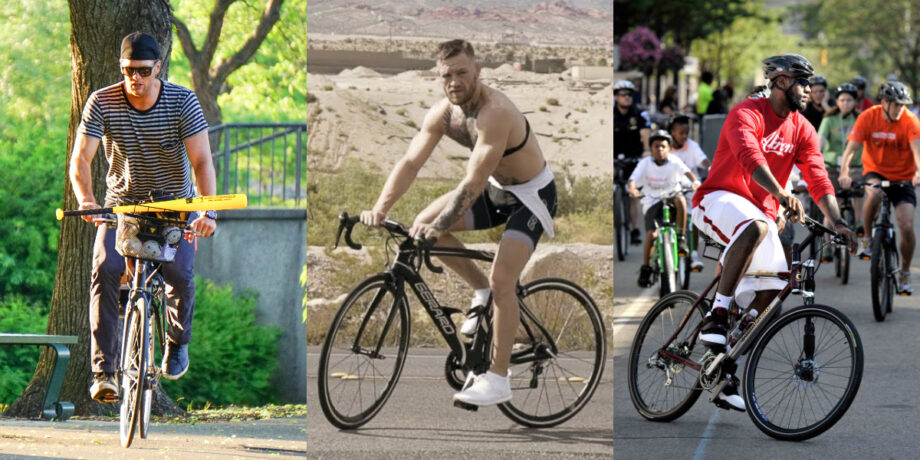 L-R: Tom Brady on a bike, carrying a baseball bat (another one of his favourite sporting past-times), Conor McGregor road cycling, and LeBron James leading a Bikeathon.

The NBA’s LeBron James might just be the biggest non-cyclist cycling fan, however. Bikes have always been important to ‘King James’, who in a 2018 Wall Street Journal shared how “everything I do comes from my childhood, from my growing up, and what I feel was part of my success… [cycling] represented freedom.”

LeBron over the years is known for cycling to and from practice and has championed a number of charitable pursuits revolving around cycling. He used to hold an annual ‘Bikeathon’ in his hometown of Akron, Ohio, where he’d give out dozens of bikes. James also founded the I Promise School in Akron, which on top of providing uniforms, food for families and career placement services for students, it also gives them bikes and helmets. He certainly puts his money where his mouth is.

RELATED: LeBron James Dares To Do What Few Men Can In Activewear

Other famous sporting figures who love a bit of two-wheel action include GOAT-status footballer Cristiano Ronaldo, who often jumps on both a road bike or a cycle machine in order to stay fit; tennis god and Australian Open favourite Rafael Nadal, who loves to cycle around his picturesque birthplace, the island of Mallorca; and bodybuilder/actor/politician Arnold Schwarzenegger, who can be regularly found cruising the streets of Los Angeles on a fat-tire bike. 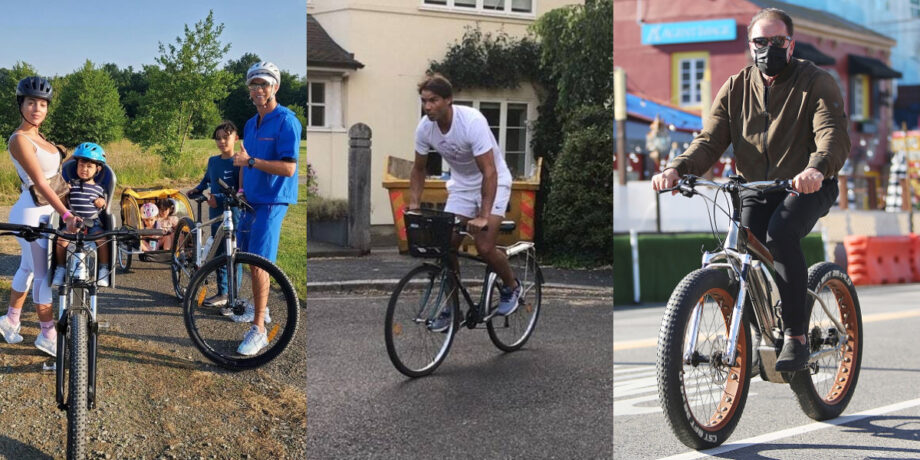 L-R: Cristiano Ronaldo on a family bike ride, Rafael Nadal tooling around on a fixie in England, and Arnold Schwarzenegger out on the streets of LA.

Of course, not only is cycling incredibly enjoyable, but it’s an exceptionally good form of exercise. According to betterhealth.vic.gov.au, the benefits of regular cycling include increased cardiovascular fitness; increased muscle strength and flexibility; improved joint mobility, posture and coordination, plus it’s a great way to burn body fat. No wonder, then, that so many of the world’s top athletes are a fan.

Inspired to get on a bike yourself? Check out our guide to the best cycling brands that’ll make you a Tour de France tour de force.