‘I Ate Like Chris Hemsworth For 4 Months. It Nearly Broke Me’

“Having to buy bulk loads of chicken, Greek yoghurt, sweet potato and other food sources rich in protein and carbohydrates is an expensive hobby.” 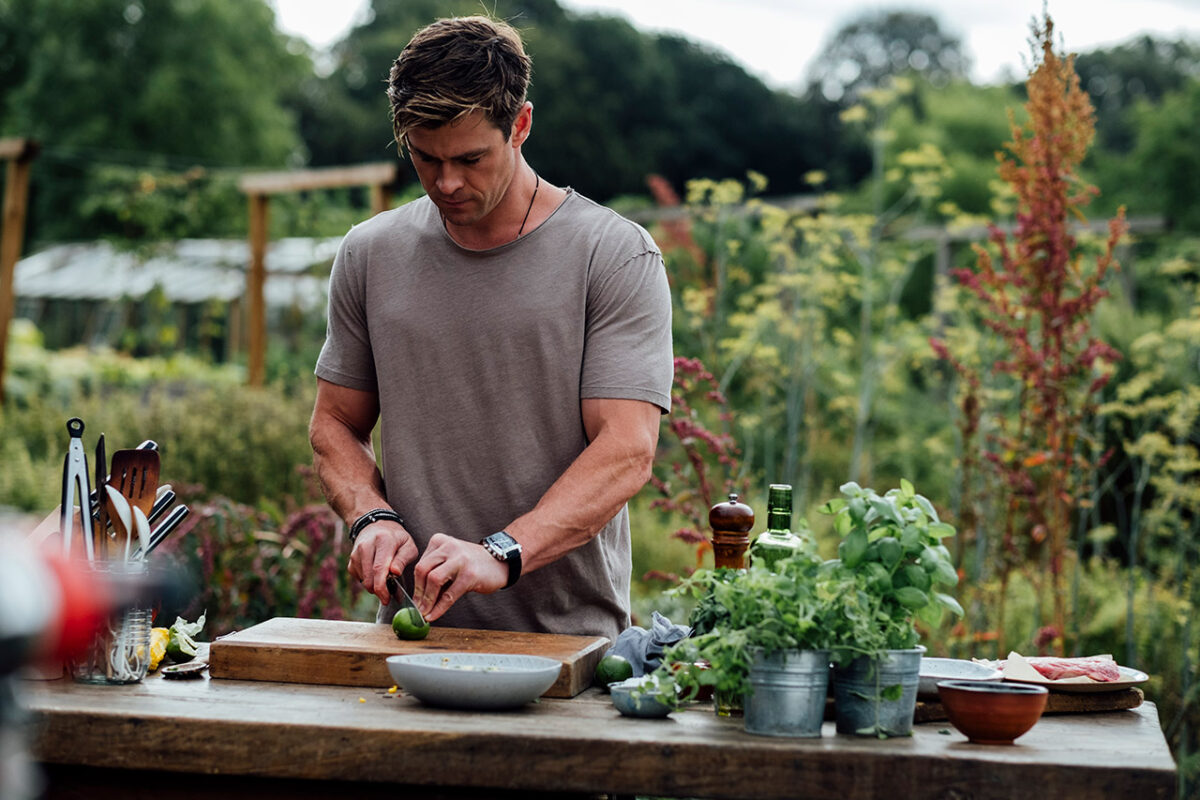 “Just one more mouthful, you can do it”, I told myself as I shovelled yet another forkful of rice into my face. Following a similar diet to Australian poster boy and certified rig Chris Hemsworth has not been a pretty process.

Having been on what seems like a never-ending quest for just an ounce of muscle definition, I was finally given the Holy Grail piece of information that had been holding me back for several years, “You need to eat more”. I’m someone who has been a member of some sort of gym or fitness studio for as long as I can remember – a good 10 years if I really think about it – but I have never seen any real transformation.

I’m willing to admit I perhaps never truly pushed myself, instead, settling on weights that I knew I would be able to lift or pull, through fear of being secretly recorded not being able to lift heavier, and ending up on one of those ‘gym fail’ compilations you see on Facebook.

During the lockdown period in 2020, however, something came over me. Not only was I well into living my life in Australia after making the move in 2018, and therefore well-accustomed to the regular appearance of abs, pecs and shoulders exhibited by Australian men, but I decided that I was actually going to get some professional help.

RELATED: Why Lockdown Was The Best Thing To Ever Happen To My Gains

Not the straight-jacket kind, the personal trainer kind. I signed up for one-on-one training at my local class-based gym, Lean Performance, and after a couple of months of assessing my general strength and fitness levels, my PT told me I was going to need to eat a shitload more food if I was going to see any gains.

I’m an ectomorph, apparently, so my body naturally finds it hard to put on weight – fat or muscle – so I needed to put myself through a huge calorie surplus. My BMR (the figure representing the number of calories needed to maintain my current weight) was worked out to be 2,000. I have been consuming 3,700 calories or more per day in the pursuit of gains.

An example of Chris’ diet can be found on Centr, the fitness program he started alongside his wife Elsa Pataky, personal trainer and best friend Luke Zocchi and the likes of former Navy Seal Trainer Joseph Savova. Upon reading this plan, I thought eating like Chris would be a lot simpler than I first thought, especially since he appeared to stagger his meals throughout the day to make them more manageable.

I didn’t copy his foods exactly, instead, settling on foods I preferred (I’m not a huge fish fan) and ones that would be easy to fit into my 9-5 schedule. Where Chris and I are similar, however, is our limited use of supplements. As Chris’ plan shows, he rarely takes supplements, with his nutritionist, Sergio explaining “we only use supplements where needed, to help Chris get extra calories and the quick nutrition they offer.”

I only consume 1 or 2 scoops of a soy-based protein powder each day, otherwise, my calories all come from food sources.

Nevertheless, I based my diet off of it the best I could. This is what I discovered when I tried eating like Chris Hemsworth*.

*Note, I didn’t quite train like Chris, as I was already committed to attending strength & conditioning classes, along with one PT session each week.

Having to buy bulk loads of chicken, Greek yoghurt, sweet potato and other food sources rich in protein and carbohydrates is an expensive hobby. But if a shrinking bank balance meant a growing body, it would be money well spent.

My assumptions were so very wrong

Upon hearing the revelation that I needed to eat more, it became apparent that I was probably eating way below my BMR for several years, hence the lack of gains. In my mind, I always thought that eating more would’ve had a counter-productive effect. How wrong I was.

Because the whole idea of creating and sticking to a meal plan was a foreign concept to me, I’ve found myself eating the same foods day in, day out, because I know they work. Fortunately, Muscle and Strength says this is generally ok.

My average daily meal plan consists of the following:

Dinner has tended to change on a daily basis, but I often look to good sources of protein such as more chicken or red meat, such as beef or kangaroo.

Going back to what my PT told me, “just keep eating”. It didn’t matter if I went over my calorie target, if anything, it was encouraged. So I occasionally turned to snacks such as small bags of popcorn or a small portion of nuts to keep me fuelled.

Alcohol really is the enemy

I’m someone who enjoys a drink or several at the weekend. I don’t mean I need to get absolutely buckled every Friday night, but to finish the week with a couple of beers with friends is something totally normal. I was surprised at just how much of an effect those couple of cold ones had on the scales at my weekly weigh-in.

Gin is a godsend

Once I figured out a meal plan that allowed me to reach my calorie target (or surpass it), I was able to commit to eating at the same or similar times each day. This, coupled with the same time for gym classes and sunrise walks (#fitspiration) meant I settled into a routine, and it felt great.

Whilst most weeks I did see a slight increase in muscle – along with plenty of others that recorded a drop in both body fat and muscle – I realised this will be a long process. Partly because of my ectomorph DNA, but also because, as Bodybuilding says, it’s “physiologically impossible to gain more than 1lb (450g) of lean muscle per week.”

At one stage of my gain train, I was averaging 150g of muscle growth per week. So I took that as a win.

I succumbed to setting myself goals

I never thought I’d be someone to get so invested in training that I would set myself weight goals, both on the scales and on the gym floor. I’m still aiming to reach a bodyweight of 80kg (I’m sitting at 78kg at time of publishing), but being able to reach 100kg for squats and deadlifts gave me a rush of pride I’ve never experienced before.

The less said about my bench press PB, the better.

I had to cheat

If The Rock and Chris Hemsworth himself advocate gorging on cakes and doughnuts, then it’s fine me to treat myself too.

It’s true. Despite consuming a huge number of calories by eating regularly throughout the day, I’ve never once found myself to be induced into a food coma. If anything, I feel better than ever. I find it easy to wake up at 5 am, and as soon as I lay my head on my pillow between 9-10 pm, I’m out in seconds.

I have more confidence

Living near the beach requires you to spend a good amount of times sans t-shirt. This was once an issue for me, and I generally spent as little time semi-naked as possible. Now, I don’t exactly fling my top off at any given moment like some drunk hooligan in Ibiza, but I’m far more inclined to.

Also, I’ve received several compliments that I look good. So that’s always a plus.

I put on muscle

I’ve been eating a calorie surplus diet for around four months now, and have put on around 3kg on muscle. My body fat percentage has fluctuated in that, ranging from as low as 10% up to 18%. Given my current diet, it’s completely normal for it to increase, as I’m going through a bulking phase. 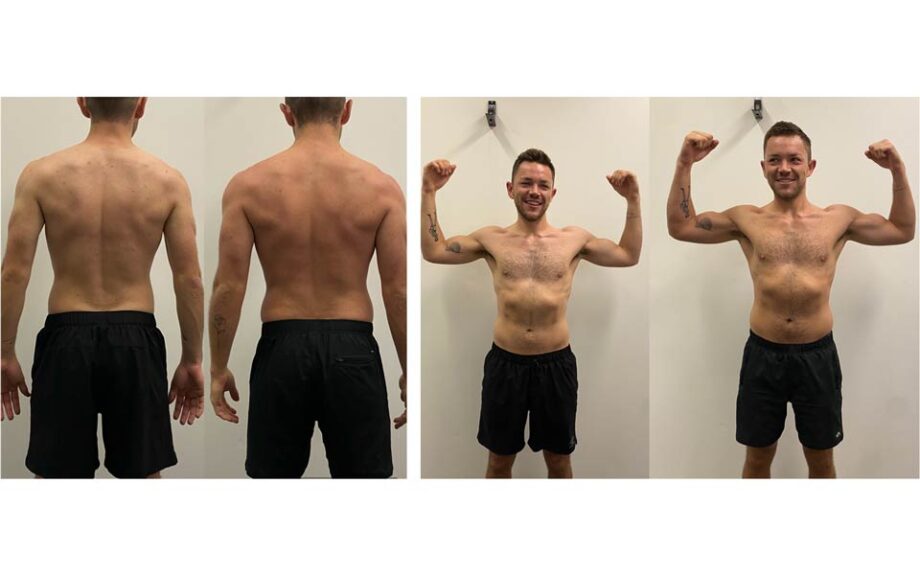 I might have more confidence, but I still can’t look at a camera. Image: Bronte Zeiher.

At these before and after photos show, I’ve not only got myself a decent tan, but I’ve filled out a lot more. I also had an imbalance between my right and left side, which, as my PT Bronte Zeiher says,

“[The muscles] are different on each side just due to imbalance. Notice the right side dips more than the left, and notice the hands sit at different heights.” 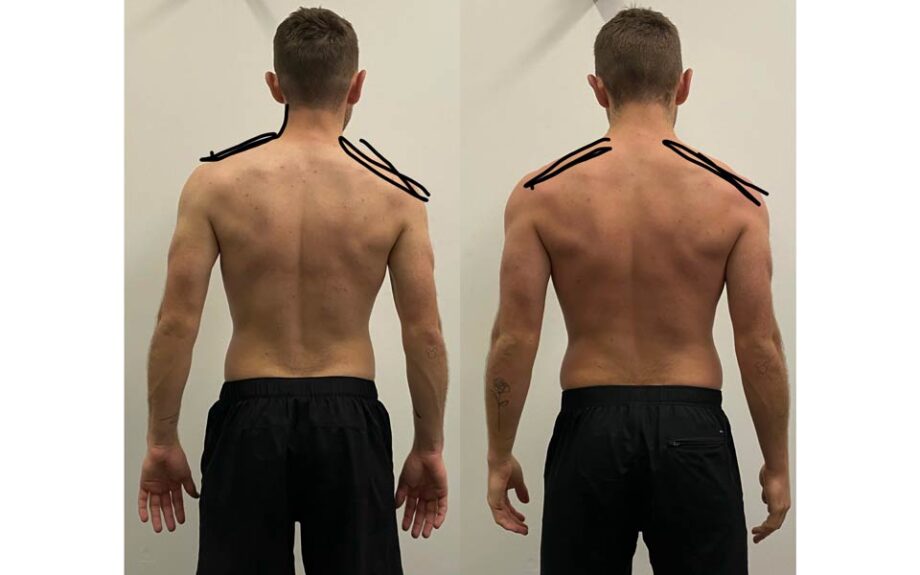 “Not a huge imbalance, and most people have it to different degrees, but the imbalance is causing the muscles to work in different parts of the body.”

In a few months – and hopefully a good amount more weight gain later – I will start reducing the number of carbs consumed, in the pursuit of washboard abs.