After a brutal 12 months, things are finally looking up in Australia as far as going out is concerned.

Western Australia’s having a bit of a hiccup right now with a flare-up of The Spicy Cough but other states and territories are approaching normalcy. Melbourne’s previously onerous lockdown has lifted, things are basically back to normal in Canberra and while Byron Bay has seen a dramatic influx of visitors from around the country (and the world), it’s weathered the storm pretty well.

Sydney’s not only dealing with COVID pretty well, but it has just been confirmed that the last of the dreaded lockout laws are set to be lifted come the start of March. It’s cold comfort for many Sydneysiders: the years of lockout laws have decimated Sydney’s nightlife, with the pandemic being the final nail in the coffin for previously vibrant areas such as (the rather infamous) Kings Cross. Still, it’s welcome news for others, at least on a symbolic level… It’s emblematic of the renewed desire to go out again after a rough 2020.

But we’re not out of the woods yet. We might be on track to conquering the COVID threat but many businesses in Sydney and beyond are still having to tread carefully; a combination of ongoing restrictions, hesitance (and just plain common sense, many would argue). Eating out isn’t the casual, carefree thing it used to be, with many businesses (understandably) hitting customers with restrictive terms and conditions.

A DMARGE correspondent shared this experience they encountered while trying to book brunch at a Bondi cafe on Australia Day: not only were they only allowed to stay for 45min, but the cafe asked for a $15 minimum spend per person. 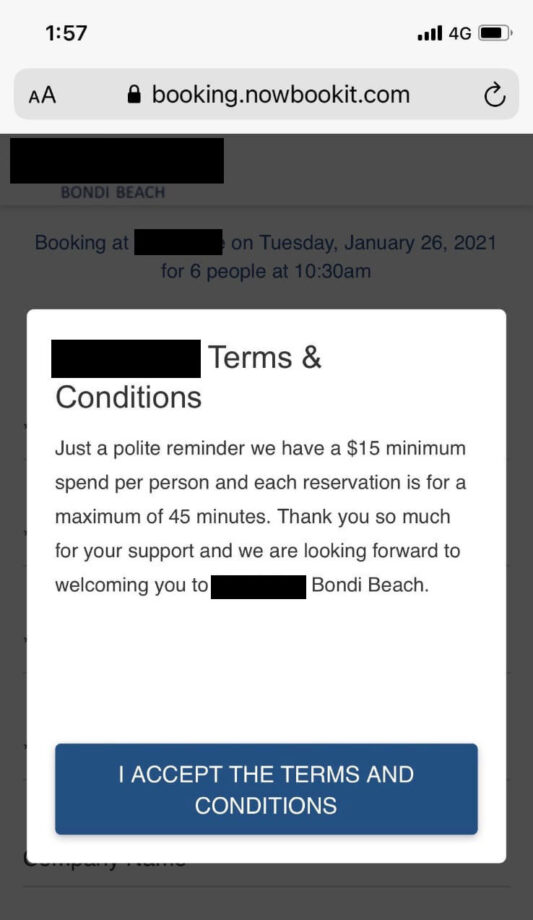 We can understand the short reservation time – cafes need turnover and at a time when the hospitality industry is struggling, small businesses simply can’t afford to have patrons spend $3 on a coffee and spend 2 hours taking up a table. There’s also the COVID element to it, of course.

But the $15 minimum spend seems cheeky. Even with the most expensive Sydney coffee prices you’d still need to buy at least 2 or 3 coffees to reach that $15 minimum, or you’d need to buy a meal – but 45min isn’t really enough time to enjoy a meal. Maybe a croissant, but then, who on earth is charging over $15 for a coffee and a croissant? The mind boggles.

Sadly, this is the reality of dining out in Australia right now: inconvenient and often rather expensive. Until The Pangolin Parade ends, it looks like we’re going to have to suck it up, put our complaints on a fork, and it the proverbial it.

Pandemic dining at its finest.