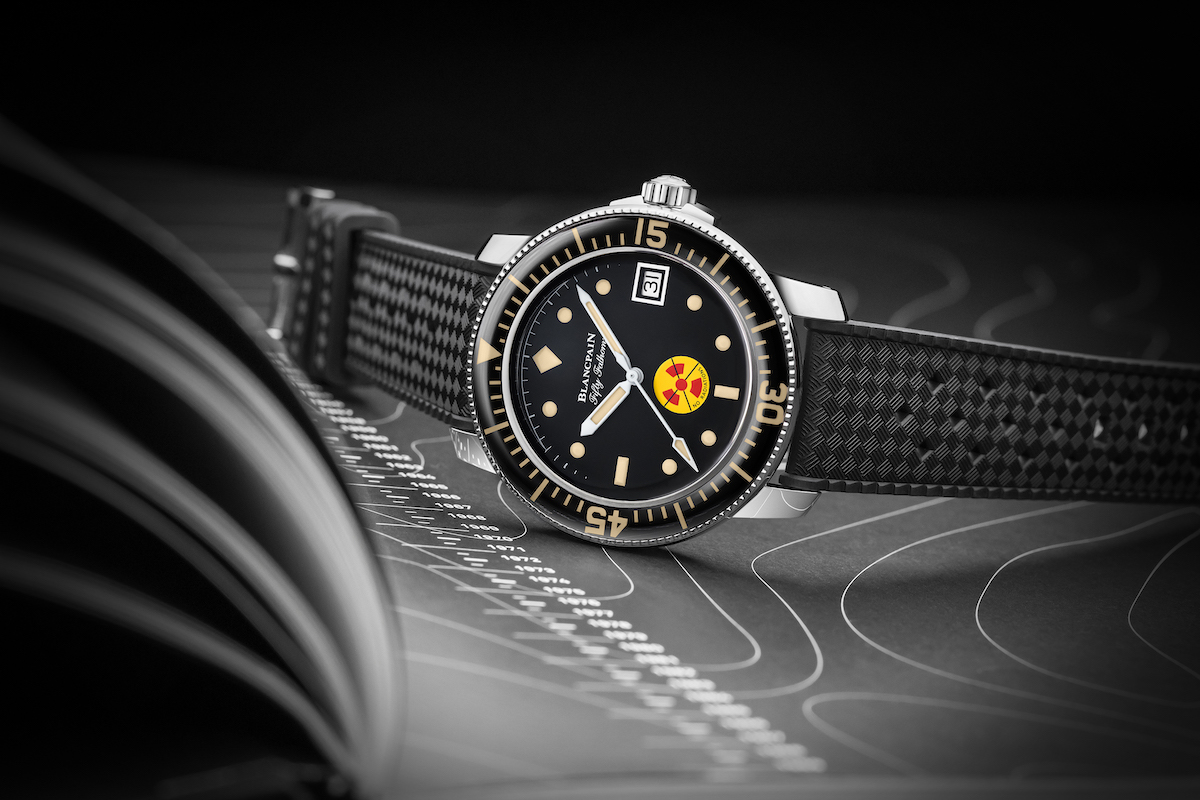 Many casual watch fans would be surprised – and potentially quite relieved – to learn that the luminous phosphorescent material (known as ‘lume’) used on modern watches isn’t actually radioactive. This didn’t use to be the case, however. As late as the 1960s, watch lume was indeed made out of radioactive radium – which can be seriously harmful to human health.

But as more and more evidence of the dangers of radium came to light, Blancpain – who had long provided watches made with radium to navies around the globe – elected to differentiate versions of their iconic Fifty Fathoms diver’s watch made without radium with a distinctive yellow-and-red badge reading ‘No Radiations’. A highly functional detail, but one that’s given those watches a cult status in the intervening years.

Back in 2010, Blancpain released a tribute to the original Fifty Fathoms ‘No Rad’ with a limited edition of 500, 45mm-wide watches. This tribute model has become quite collectible in its own right, but 45mm is quite a large case size; one that the average watch fan might fail to pull off.

Thankfully, 2021 has seen the 286-year-old watch brand dive back into their archives once again. Enter the Blancpain Tribute to Fifty Fathoms ‘No Rad’ (ref. 5008D-1130-B64A): the icon reborn, this time in a much more period-correct (and wearable) 40mm case size and also boasting a suite of technological updates to bring it into the 21st century. 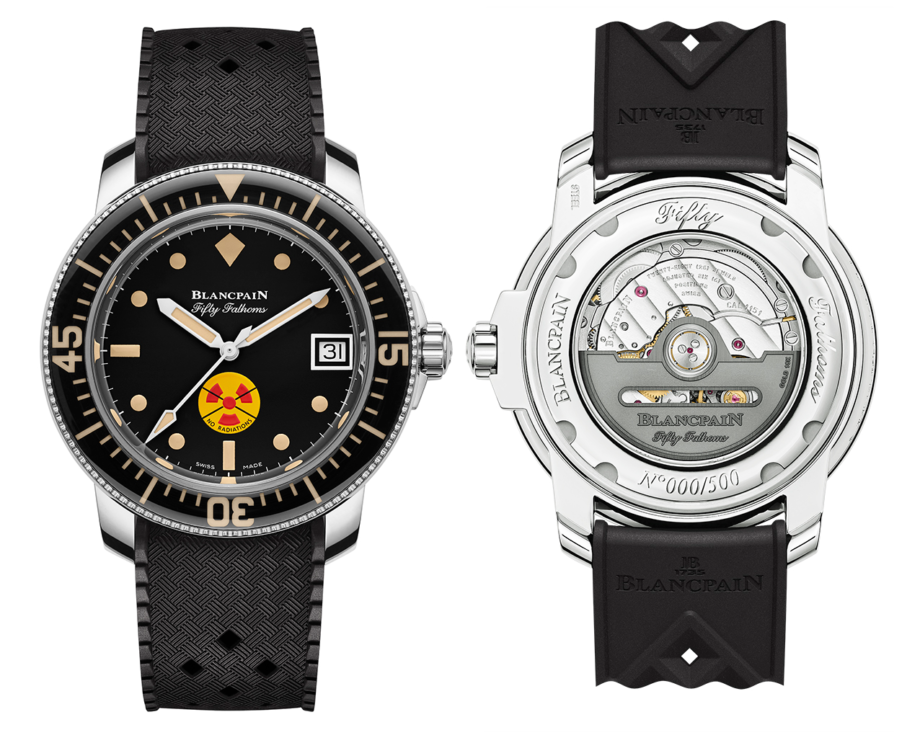 The obverse and reverse of the 2021 Blancpain Tribute to Fifty Fathoms ‘No Rad’.

The iconoclastic ‘No Radiations’ badge immediately catches one’s eye, its bright colours standing out against the matte black of the watch’s dial. It reminds us of the famous anti-nuclear “Nuclear Power? No Thanks” badge that became ubiquitous worldwide in the late 1970s and the 1980s and has since enjoyed a revival among design fans today.

RELATED: ‘Save The Divers’: The Sustainable Trend Innovative Watch Brands Are Following

The ‘No Radiations’ badge isn’t the only vintage detail to grace this piece, however. The chapter ring, the hands and the time scale on the bezel all feature “old radium”-coloured Super-LumiNova, emulating aged radium lume (just without any of the dangerous radioactivity). At 3 o’clock sits a date aperture highlighted by a white rim, as seen on 60s-era Fifty Fathoms models, and the rubber strap features a ‘tropical’ weave pattern; another retro touch.

But it’s not all just throwbacks. The unidirectional rotating bezel, featuring graduations typical of the initial Fifty Fathoms models, is fitted with a sapphire insert, a distinctive and luxurious feature of Blancpain’s contemporary models. It also utilises Blancpain’s Calibre 1151, a self-winding movement equipped with a silicon balance spring and endowed with a four-day power reserve.

To mark the launch of this new limited edition watch, Blancpain has also released an exclusive two-part documentary film, the first part of which you can watch below.

Like the 2010 release, the Tribute to Fifty Fathoms ‘No Rad’ is a limited edition of only 500 pieces, and is priced at 19,500 AUD. Also like that 2010 release (and unlike radium), this watch won’t have a long half-life: if you’re interested, head to Blancpain’s online boutique ASAP.