Justin Bieber Lives Out His Fisherman Fantasies With $870 Gumboots

Catch of the day.

Following Justin Bieber’s endlessly revolving wardrobe is a wild ride. One that sometimes we’d like to get off, but we continue to find ourselves strapping in for.

Footwear in particular seems to be his kryptonite. The man has an insatiable appetite for rubber clogs: he’s absolutely obsessed with Crocs – “the footwear contraceptive for men” – as well as these bizarre Yeezys. Now, we used to think this was all him, but turns out he’s got some enablers, with the 27-year-old music superstar showing off a birthday present that’s taken him further down the rubber footwear rabbit hole.

‘The Biebs’ shared a photo from his Paris hotel room on Thursday showing himself trying on a pair of Bottega Veneta ‘Puddle Boots’ worth a cool $870. The designer gumboots, which feature a Chelsea boot-esque pattern and are constructed from a biodegradable polymer, actually don’t look too bad – although we don’t know if we’d ever spend that sort of money on a pair of wellies, let alone a pair of wellies for someone else. Who’s feeding his addiction?

Unfortunately for Bieber, wearing them alongside that cable knit sweater and beanie he’s got on makes him just look like the world’s richest fisherman. Talk about The Deadliest Catch.

Apart from doing a bang-up fisherman impression, it seems as if Bieber’s Beatles impression isn’t too shabby either. ‘The Biebs’ was spotted performing with his band on the roof of the Hotel de Crillon on Tuesday, à la the British band’s final live performance atop the Apple Records building at Savile Row in 1969. Very rock and roll. 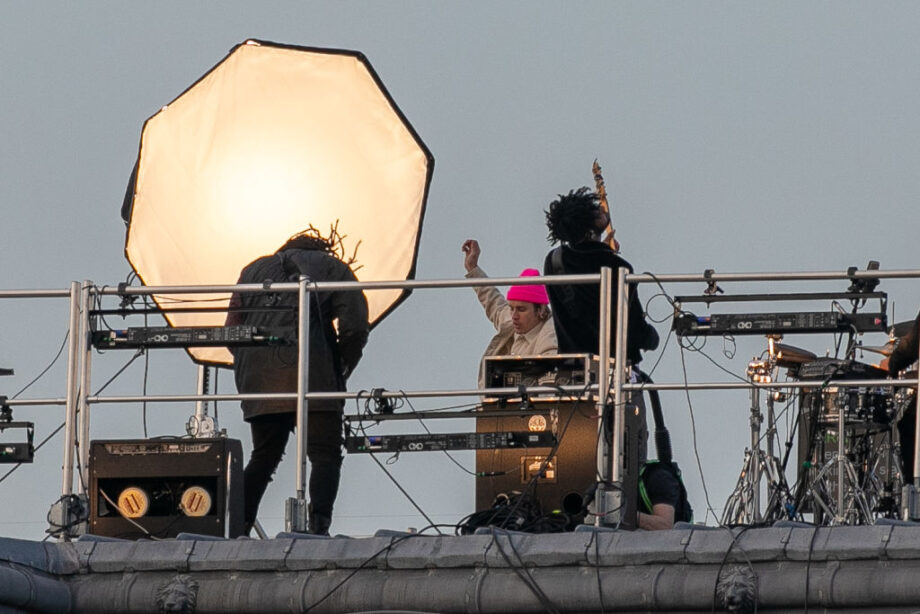 It’s not clear whether or not this Parisian performance is for a music video, but it’s a likely bet. Bieber’s been releasing some seriously slick music videos lately…

Last week, Bieber announced that his sixth studio album Justice was almost done, and due to be released on March 19th. He’s already released four singles from the album: Holy and Lonely last year; Anyone on New Year’s Day this year; and Hold On only yesterday, alongside a slick music video that sees Bieber engage in a thrilling motorcycle escape from police. You can watch the clip here.