Justin Bieber’s a man who’s been cut many times before, but it hasn’t stopped him from going out on a limb and trying new styles. Normally he’s a pretty dapper dude, but it seems as if footwear is his kryptonite: sometimes he absolutely nails it, like with these ‘People’s Jordans’ he wore a few weeks ago or these funky Clarks Wallabees he was spotted in last year…

But then he’ll turn around and go out in public in Crocs – “the footwear contraceptive for men” – or don something like these bizarre Yeezys. It’s a real crapshoot, with crap being the operative term. The man has an insatiable appetite for rubber clogs.

Now it seems he’s found a new, equally as questionable footwear option to torment us with – and has topped it off with some questionable sunglasses to boot. ‘The Biebs’ was spotted on the streets of Paris yesterday wearing some bright yellow woven slide-looking things; the sheer vivacity of his kicks at complete odds with the earthy palette of the rest of his outfit (which is actually pretty crisp). Well, except for those awful pink sunglasses. 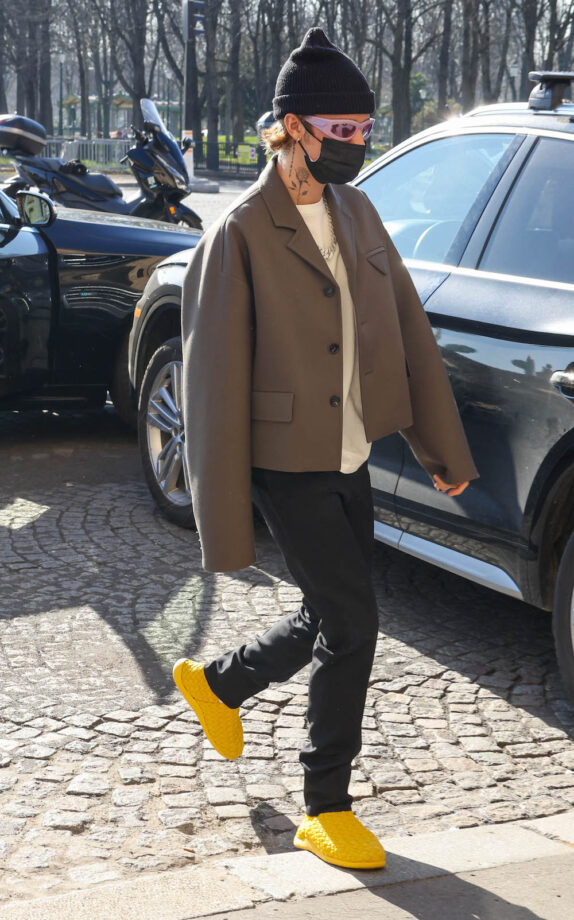 The basket-weave, ballet flat-looking sneakers are a strange look. And that colour! Bieber might argue it ‘pops’ (and it certainly does) but it’s burning our corneas. He’s got form in this department: the 27-year-old has a well-established affinity for all things yellow. Take this all-yellow outfit he was spotted in last year (which he also paired with a yellow gold Rolex. Guess he’s a sucker for a theme).

We wonder what the well-dressed denizens of Paris think (at least it’s not boring, we suppose).

Last week, Bieber announced that his sixth studio album Justice was almost done, and due to be released on March 19th. He’s already released three singles from the album: Holy and Lonely last year, and Anyone on New Year’s Day this year. A fourth single, Hold On, will drop this Friday.