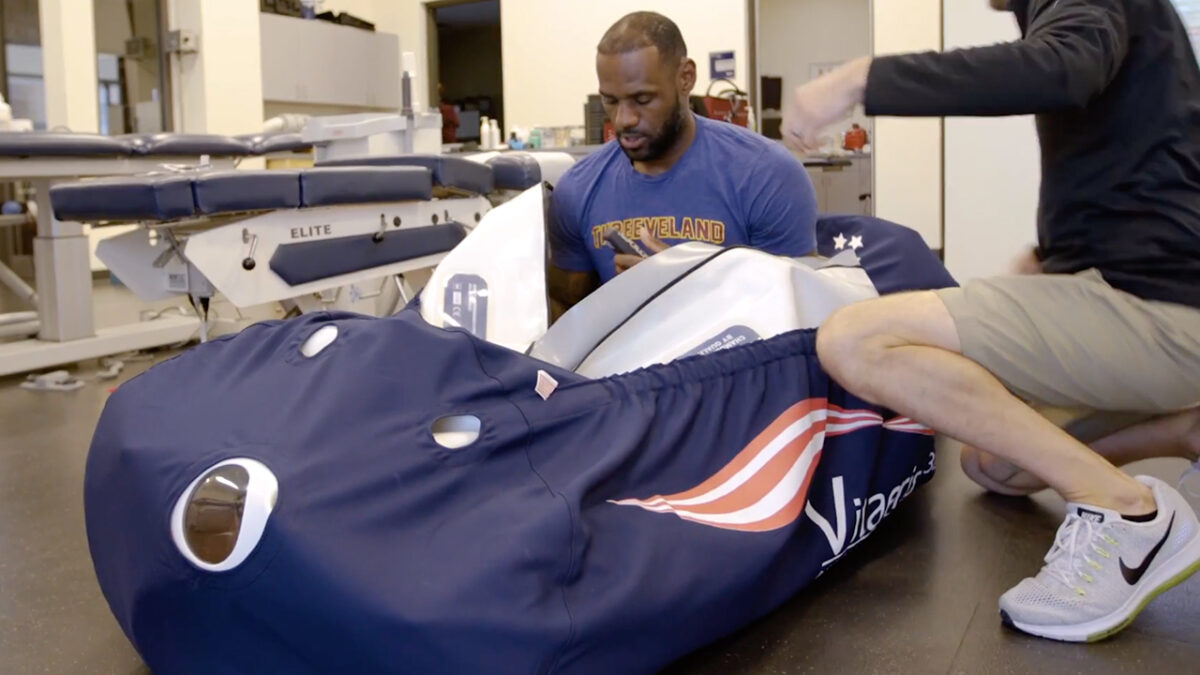 Professional athletes and injuries are inevitable. No matter how tough, strong and skilled a player or athlete may be, at some point in their career they’re likely to suffer some kind of setback. Injuries can, of course, range from minimal and worry-free to those far more serious and potentially career-ending. Fortunately, with the advancement of medical techniques and practices, athletes are now able to receive space-age (looking) treatments to help get them back to playing sooner than ever.

One such athlete who appears to be undergoing his own futuristic rehabilitation program is Los Angeles Lakers poster boy LeBron James. The multi-championship winning small forward and arguably one of the greatest players to have ever graced the court, suffered a nasty high-ankle sprain during a match between LA Lakers and Atlanta Hawks on Saturday 19 March 2021.

Reports claim James could be out for at least four to six weeks, but potentially longer, depending on the seriousness of the injury. To help him along with his recovery, James recently posted a video to his Instagram story that showed him lying in a ‘bio dome bed’. He added he would be in the bed – or at least be using it for periods each day – for the next few weeks.

James reportedly suffered a high-ankle sprain, a far less common sprain compared to a lateral ankle sprain – the kind we’ve likely all encountered when playing sport, or walking down the stairs slightly wrong. A high-ankle sprain, by its very name, occurs higher up the leg, and according to The Prehab Guys, account for only 10 per cent of ankle sprains worldwide.

Healthline adds a high-ankle sprain “is a sprain in the upper ligaments of your ankle, above the ankle itself. These ligaments are attached to the fibula and tibia, stabilising the entire area for actinides like running and walking.”

Common treatments for high ankle sprains include much-needed rest, ice and anti-inflammatory medication. In LeBron’s case, his bio dome bed – which we believe to be similar to a Hyperbaric Oxygen Chamber (similar to the one Michael Jackson used to allegedly attempt to prolong his life) – has been known to help speed up the healing process.

There is currently not a huge amount of information or study into the effects such a chamber can have on injuries – suggesting it is still very much a futuristic, or ‘space-age’ technology.  However, one study dates back to 1995 and looked into the specific effects of HBO (Hyperbaric Oxygen Therapy) on ankle sprains, and found athletes returned to their sport “approximately 30% faster than the control group after an ankle sprain.”

A report from 2011 collated various other studies and examinations of HBO, and added “Within hyperbaric therapies, hyperbaric oxygen therapy (HBO) is the administration of pure oxygen (100%) at pressures greater than atmospheric pressure, i.e. more than 1 atmosphere absolute (ATA), for therapeutic reasons.”

“The application of HBO for the treatment of sports injuries has recently been suggested in the scientific literature as a modality of therapy either as a primary or an adjunct treatment.”

“HBO seems to be promising in the recovery of injuries for high-performance athletes; however, there is a need for larger samples, randomized, controlled, double-blinded clinical trials combined with studies using animal models so that its effects and mechanisms can be identified to confirm that it is a safe and effective therapy for the treatment of sports injuries.”

Finally, a 2005 study conducted by Ishii et al recorded the effects of HBO treatment on seven Olympic athletes, these athletes “received HBO treatment for 30–40 minutes at 1.3 ATA with a maximum of six treatments per athlete and an average of two. It was found that all athletes benefited from the HBO treatment presenting faster recovery rates.”

While it hasn’t been confirmed LeBron is receiving the same treatment, we can certainly speculate, as he’ll no doubt be wanting to get back to match fitness as soon as possible to help his team fight to top the table of the Western Conference. The LA Lakers are currently sitting in fourth place, five points behind leaders Utah Jazz.