‘Uncovering’ the truth about the world of selective dating…

Fast cars, fast friendships, Instagram sponsored posts, megayachts – millionaires are known for many things. Patience is not really one of them. Unfortunately (or perhaps, from a less contorted perspective, fortunately) when it comes to love, you can’t buy it.

Before we jump into the bubble bath of ‘millionaire’ dating, here’s a little context. Premium dating apps have exploded in recent years. Though Tinder and Bumble still reign supreme, more luxurious offerings have more than found their place in the online dating industry, which Financial Times reports is worth $2.5bn in the US alone.

Premium dating apps include Toffee, The Inner Circle and The League, which screen people based on everything from whether or not they were privately schooled, their bank balance, the industry they work in and how many LinkedIn connections they have.

RELATED: ‘I Felt Incredibly Naive & Unprepared’: What Really Happens At A Couples Only Resort

There is also, of course, Luxy, which calls itself a “millionaires’ matchmaker” and which – when it launched in 2014 – touted itself as “Tinder, minus the poor people.”

In 2018, Raffael Krause, marketing manager of Luxy, told Financial Times that Luxy had “been profitable since its first year of operation and now has more than 2m users.”

“Those who apply to be accepted on to the app, which is free at the basic level, must first pass a 24-hour process where they are vetted by existing members,” Financial Times reports. “Luxy’s staff then filter those applicants again ‘to check whether or not the user fits.’ Only 10-15 per cent of those who apply are accepted and the company claims that half of its active members earn more than $500,000.”

Remarks on the website’s homepage show users spruiking the fantastic time they had on the app.

“The best dating app ever!” One testimonial reads. “Luxy is really awesome, and I love it over other dating apps. I met plenty of pretty girls there and had a bunch of interesting experiences.”

“Got 38 likes a day! This app is perfect and full of genuine people. I’d definitely recommend Luxy to all my friends,” wrote another.

It even includes a quote from Jimmy Kimmel, who said: “Those of you who are single: there is a new dating app exclusively for rich people – Luxy. While Tinder is for all kind of people, Luxy is exclusively for the top 1%.”

The website claims 60% of Luxy members have a verified annual income of more than £200,000 and 41% are verified millionaires. It also claims there are no Sugar Babies or Sugar Daddies.

However, the reviews left about the app in the Google Play app store show another side to the Luxy dating experience – the downside of there not being the massive volume of other apps.

Though some users have found love anyway (see: the following video), others are irate.

According to the aggrieved users, there are two main problems. One: the app has a tendency to crash. And two: there is not a big enough user base to make the app worthwhile for everyone.

Thirdly, there is another common complaint, which is that you can’t properly assess the above until after you’ve paid. Though it should be noted the app does explain this (perhaps not clearly enough) on its homepage. It’s also worth noting that much of the vitriol may be exaggerated due to the disappointed frame of mind of the complaining users.

Though one user was impressed with “the [people] I met on [the app]” he complained “there are serious bugs in the code” saying that “it’s the only app on my phone that freezes and crashes multiple times per use.”

“I hope it gets ironed out, but the rest is great.”

The freezing was a common complaint. Another wrote: “Horrible performance. App locks up for 2m every time I try to message someone.” 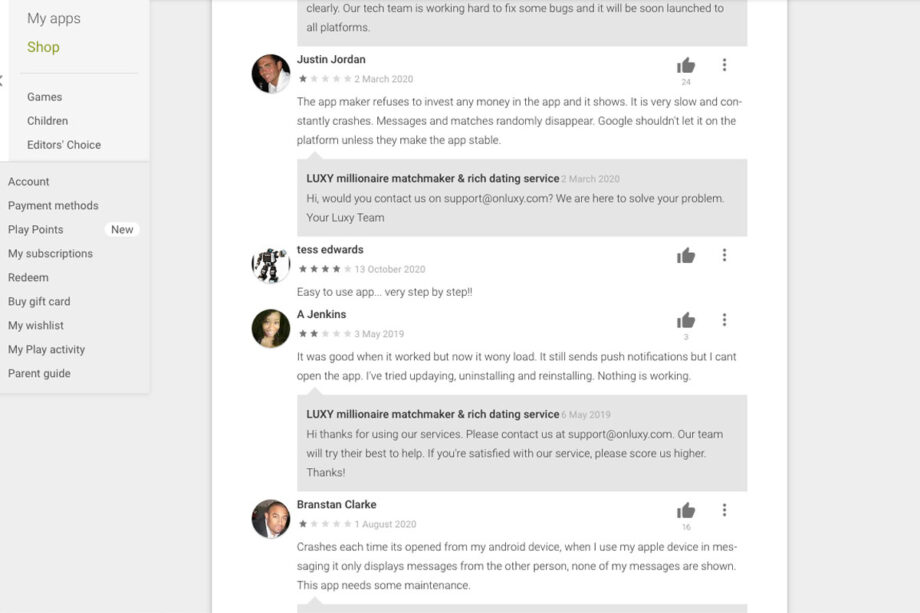 Another user griped, “I continue to have to delete app and install over and over. I wasn’t provided with much help. This app is just a high price rip off. After you pay for these different statuses and then you pay more for extra gifts and perks. The name and features give you access to people of stature all over the world… but the service doesn’t add up.”

“Can’t view anything or message unless you pay 70 a month. Can’t view other profiles to see if it would even be worth paying to message people,” wrote another.

“I have no issues paying for the costly membership, but they won’t even allow you to see if there are members near you. [It] takes your money, then you find out the nearest members are 2,000 miles away. Not [keen] to pay $70 just to see if there are people near me.”

“This app is the worst. Doesn’t work half the time and lies about how many individuals are nearby. Save your money and use another app.”

Back to Tinder and Bumble it is, it seems.

Rich people aren’t the only ones struggling to find a date right now. As DMARGE reported last year, though online dating saw a boom during 2020, the number of people feeling satisfied by their pandemic pashes hasn’t necessarily risen at the same rate.