Michael B. Jordan Spotted Wearing This Season’s ‘Must Have’ Men’s Shirt

Here’s a hot-take: menswear essentials are almost as important as a smile that will stop time. These are the pieces that all men should have in their wardrobe to cover them for all scenarios, eventualities and seasons. Not only do these pieces ensure guys can mix and match pairings and be safe in the knowledge they’ll look good, they’re also utterly timeless, so will seldom need replacing.

One man who appears to understand such niceties is Michael B. Jordan. One of Hollywood’s elite and a consistent source of workout and style inspiration, the Creed and Black Panther star regularly stands out for his faultless choices.

Case in point: this latest shot of the man himself on the set for the upcoming film Journal For Jordan, wearing a denim shirt, one of the pinnacle pieces that should feature in every man’s capsule wardrobe, and one that works perfectly throughout the transitional period from summer into autumn (and for those on the other side of the globe, winter into spring). 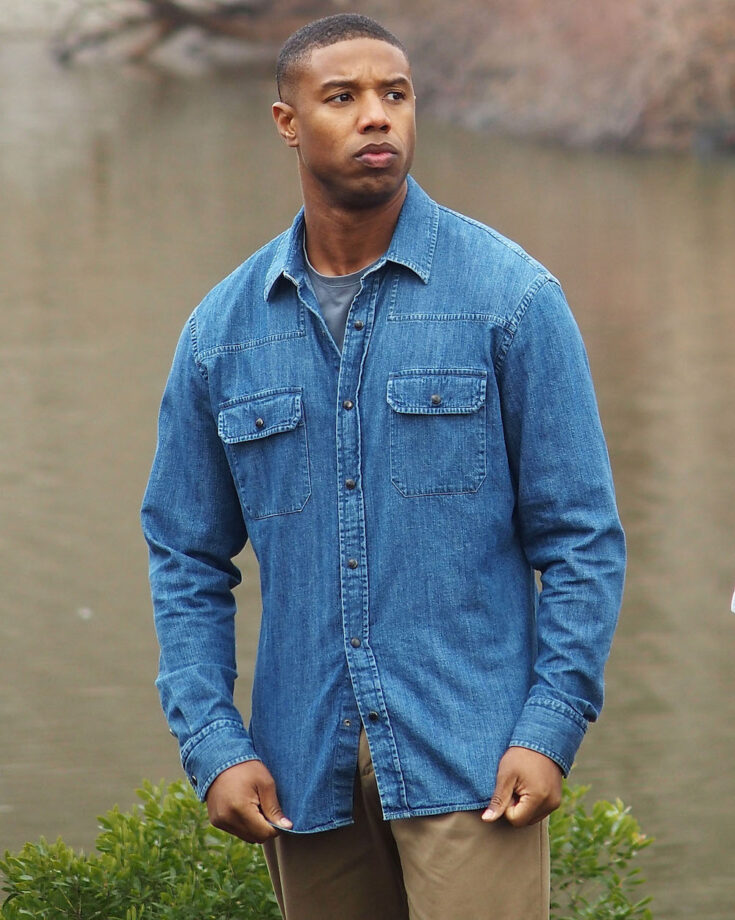 What makes the denim shirt such an essential piece? It’s versatility for starters. Not only can it be worn in casual settings, as Michael proves here – being layered over a t-shirt in a complementary darker shade of blue and brown pants – but it can also be dressed up somewhat, slotting comfortably underneath a blazer and paired with jeans. There are some rules to remember, however, with the main one being you should always try and contrast top and bottom, if you’re wearing denim jeans too.

Expert men’s stylist Jeff Lack, who says the western style denim shirt is the “single best dating uniform for the modern man,” adds weight to this argument, explaining to DMARGE that the denim shirt has remained timeless because it can be “used for work, play and getting dressed up. Throw on a tie with an unstructured suit and sneakers, or open a few buttons to highlight your chest lettuce and pair with chinos.”

Jeff agrees that the denim shirt is a quintessential transitional piece, adding, “Everyone can look good in denim shirts. Jackets and coats over the top or t-shirt or roll necks underneath, there’s no end to its versatility.”

Hopefully, if you’ve made it this far, you’re feeling persuaded enough to go out in search of your own denim shirt. To help you with the search, Jeff recommends some foolproof colour pairings for your bottom half to get you started, “pair with black, white, navy, tonal denim, army green and tan”, and we here at DMARGE are able to point you in the direction of some of the best brands producing denim shirts right now.

For Jeff, his go-to choice for a denim shirt right now is this one from Danish menswear brand, SNEUM. It takes the classic western style adopted by Michael B. Jordan, but gives it red stitching for a subtle colour pop and sawtooth-style pocket flaps to push the style boundaries.

Jordan’s upcoming movie Journal for Jordan is an adapted screenplay from the memoir of Dana Canedy, Senior Vice President at publishing house Simon & Schuster. The memoir was written in response to the death of Canedy’s husband Charles Monroe King (whom Jordan portrays) in the Iraq War.