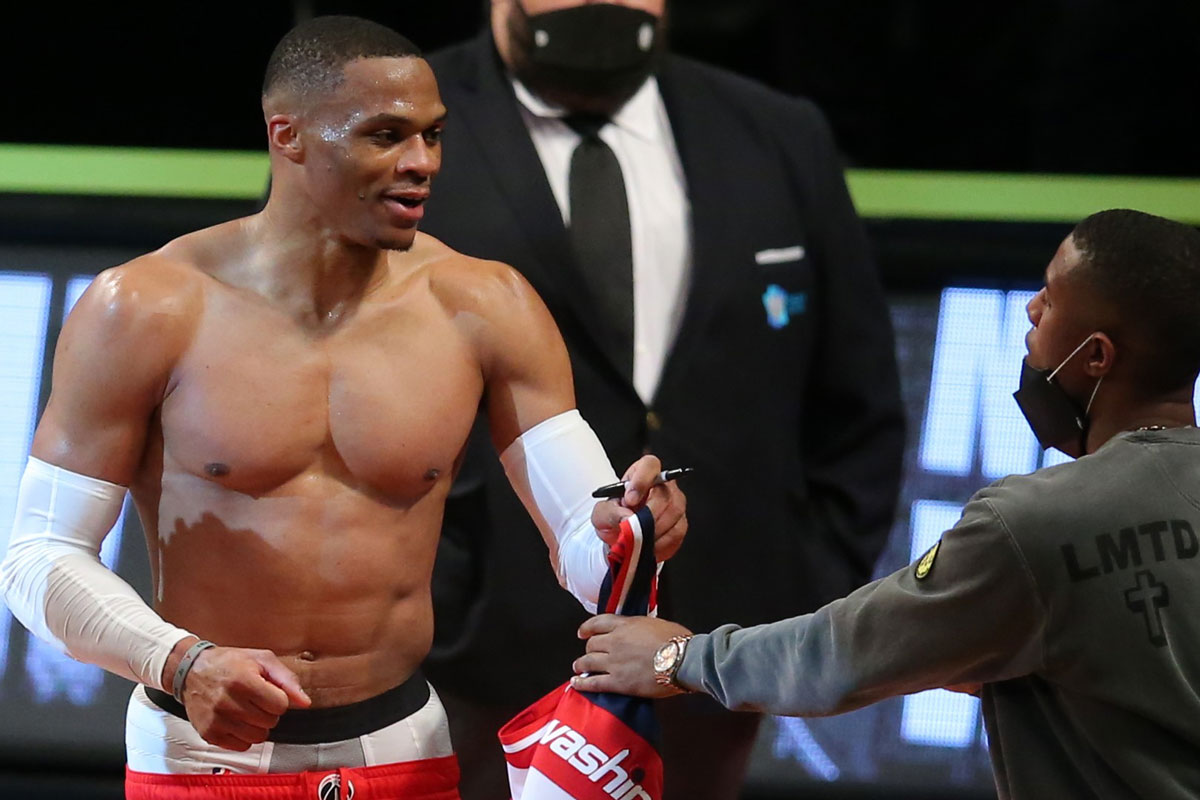 Eight packs are not so much a reality as an ‘urban myth’ – for most of us.

Russell Westbrook is not ‘most of us,’ however. The Washington Wizards point guard (who is also a 9 time NBA all-star and the 2016-2017 NBA most valuable player) took on the Brooklyn Nets at New York’s Barclays Center on Sunday.

Although his team lost, Westbrook won the internet. How? He signed his jersey for Creed star Michael B. Jordan, who was sitting courtside, after the game. Westbrook’s rippling physique then sent shockwaves through the internet so far that 638,805 pairs of hands decided to tap ‘like’ when the video was reposted on Instagram account @sportscenter.

Michael B. Jordan, who has a ripped rig of his own, threw Westbrook a praise hands emoji (presumably as a thanks for the shirt) while the rest of the Sports Center followers lost their shit over the 32-year-old’s chiselled body.

“Russ looking like [Jordan’s] next opponent in creed 3,” one wrote.

“Yo he built as,” another commented.

From Dwight Howard and Metta World Peace (formerly known as Sandiford-Artest) to Andre Iguodala, there are a lot of contenders for the (unofficial) title of ‘most ripped man in the NBA’ right now.

But With Lebron James currently out injured, we feel comfortable making the following claim: Russell Westbrook is the most ripped man in the NBA right now. He’s also, as we have reported time and time again, one of the league’s most stylish gents (see: Russell Westbrook Will Steal Your Wife With The World’s Most Expensive Skater Outfit).

If you’re wondering about the secrets to Westbrook’s extreme physique, it pays to look at his workouts. Team-mates have said there is an air of secrecy over how the triple-double machine trains, and that he is always in before anyone else.

“I think I saw him lifting weights once during the preseason,” forward Domantas Sabonis told Bleacher Report, “but not since.”

According to Bleacher Report, “Westbrook’s workouts are shrouded in secrecy,” and the last time one of them leaked, it came from former director of athletic performance Dwight Daub.

The leaked workout was centred on core and balance – and suited a player who prefers to “crash the lane” at every opportunity (and angle) and avoid injuries.

Wes Long, UCLA basketball’s strength and conditioning coach, who arrived in Westwood for Westbrook’s final season as a Bruin, in 2007-08, told Bleacher Report he recalls seeing a pickup-style preseason practice on his first day and marvelling at Westbrook’s cardio.

“This practice meant nothing, but he was rebounding. He was setting screens. He was cussing guys out…It was like it was the national championship game.”

According to Bleacher Report, “When Westbrook was preparing for the 2008 NBA draft, he trained with Rob McClanaghan – and without him.”

“After mornings running full-speed basketball practices for over an hour nonstop, he’d carve out time to lift weights on his own in the evenings. And although McClanaghan begged Westbrook to take Sundays off and let his body recover, he heard reports each week of fans who had spotted him in one gym or another around Los Angeles.”

It would seem his physique is well earned…