“I’m talking to two of the biggest sport stars in the world.”

Hamilton’s list of accomplishments and his effect on Formula One is almost incomparable. As of 2020, he’s matched Michael Schumacher’s record for all-time World Championship driver’s titles and holds the outright records for the most wins, pole positions and podium finishes. He’s helped Mercedes win a record seven constructor’s championships in a row and is also widely credited as fuelling the intense rise in popularity of F1 over the last decade.

Brady’s dominance in American football also has few comparisons. The only quarterback to win a Super Bowl in three separate decades, Brady’s career has seen a record ten Super Bowl appearances and seven victories. He also holds the all-time records for passing yards, completions, touchdown passes, games started and Super Bowl MVP awards. His two-decade dominance with the New England Patriots – as well as his controversial but ultimately successful move to the Tampa Bay Buccaneers – make him unlike any other NFL player ever.

In short, they’re both the Greatest Of All Time – GOATs – in their fields… Which is why it’s so exciting to see the pair come together for a chat.

Brady and Hamilton recently sat down for a YouTube special titled ‘Talking Big’, hosted by Swiss luxury watch manufacturer IWC Schaffhausen and television star James Corden. The 18-minute-long chat saw the three cover everything from pre-game superstitions to how they might perform in each other’s sports, revealing that despite the pair’s differences, they actually have a lot in common.

“Tom and I, we’ve met multiple times and been in touch for some years now. Sometimes I message him, trying to secretly get a bit of advice,” Hamilton jokes. (Back in 2019, Hamilton told ESPN he thought it was surreal that Brady even knew his name.)

“I watch really closely what Tom has achieved, some of the things that Tom does in his training. How he prepares himself. How he conducts himself with his team. There are so many things that you can take from watching a great athlete like Tom that you can then apply to be a better athlete yourself.”

Brady, too, admits that he’s a fan of Hamilton’s, the hard-training quarterback impressed at Hamilton’s dedication.

“Lewis already trained this morning for, I don’t know, 10, 12 hours, something like that. How many other people are doing that? That’s why he’s the greatest Formula One champion of all time.”

Both athletes are brand ambassadors for IWC but unlike many corporate partnerships, they come from a genuine place. Hamilton and Brady are both real watch nerds, and have always had a soft spot for the Swiss brand.

“In college, I knew I was going to become a professional and I had this image as my screensaver on my really old computer of a watch,” Brady shares.

“It was the IWC GST Automatic Alarm from, like, the late ’90s. So, I had the screensaver and I thought, ‘If I ever make a few bucks, this would be the watch that I would want.’ And I ended up buying my first watch at a Tourneau store on 57th Street in New York. And I just went in there at a random time and bought a watch that I still have, this beautiful IWC that I still have.” 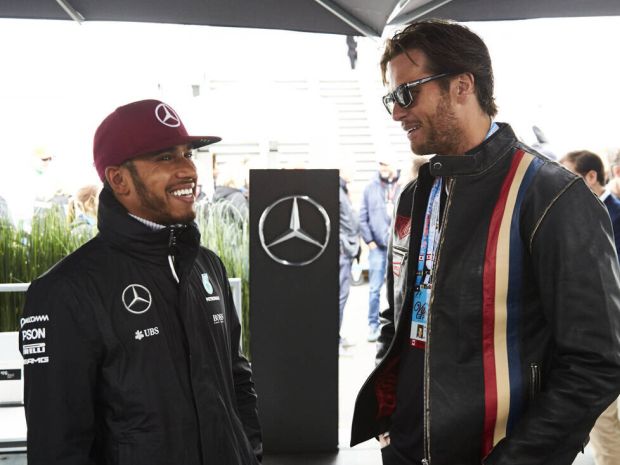 Tom Brady and Lewis Hamilton chat before the Canadian Formula One Grand Prix in 2016. Image: Pinterest

Hamilton also shared how he’s a bit of a watch nut – his passion for timepieces clearly influencing his love of high-performance racing machines.

“As a kid, I was always taking things apart and rebuilding them. When you look at one of these watches and there’s 500 pieces all put together by one person, the craftsmanship… is fascinating. Plus, the pieces obviously are tiny. I remember getting my first watch, it was from Argos in England, and the watch [was] like six pounds. I remember saving up for that watch. I went to school and I felt really proud. I used to wear it outside my blazer, and I thought that it elevated me.”

The 2021 NFL season will start on the 9th of September in Tampa Bay, Florida, with big question marks about the length of the season hanging over the league thanks to the ongoing COVID-19 crisis. The 2021 NFL draft however is just around the corner, scheduled to be held from the 29th of April to the 1st of May in Cleveland, Ohio.

The 2021 Formula One World Championship will kick off with the Bahrain Grand Prix on the 26th to the 28th of March, with the Australian Grand Prix (which normally opens up the season) being pushed back tentatively to November. Pre-season testing wrapped up last week in Bahrain: a departure from the norm, as pre-season testing is usually done in Barcelona.