And you thought G-Wagens were tough… 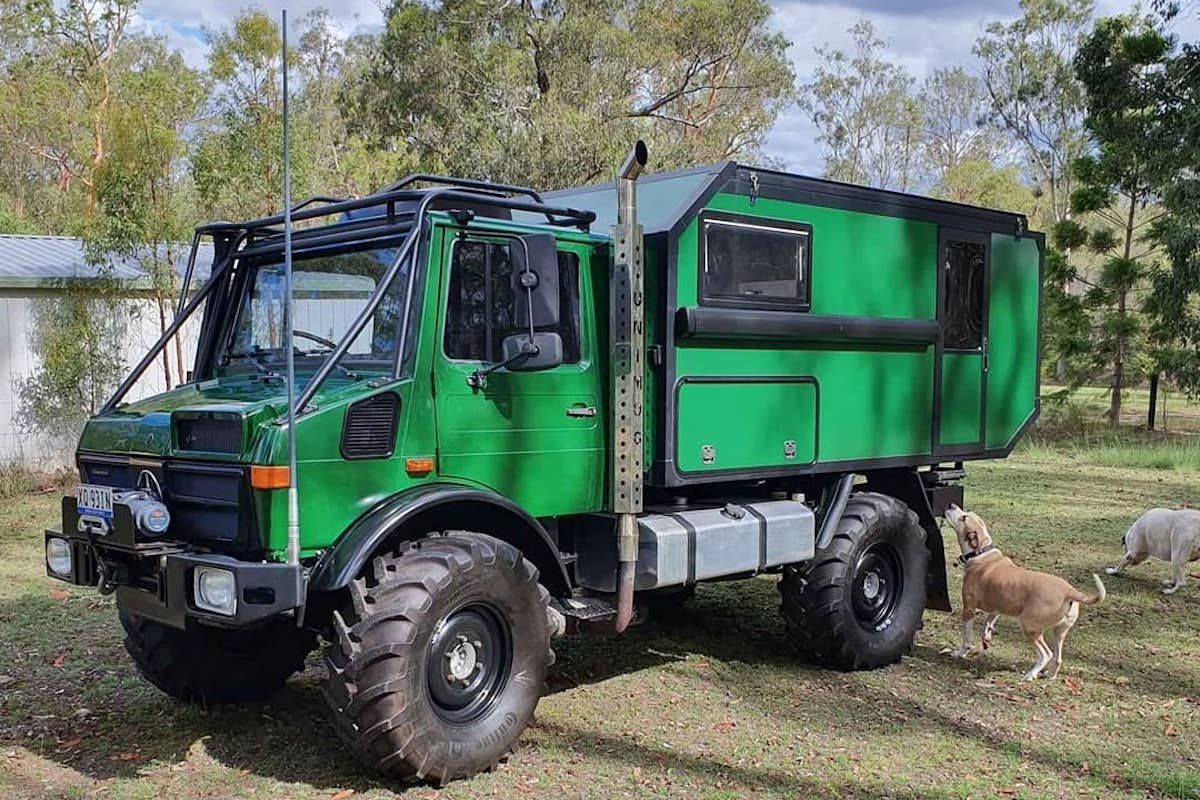 Mad Max wouldn't be mad about this: the 1986 Mercedes-Benz Unimog campervan conversion on sale in Blackbutt, Queensland. Image: Gumtree

Mercedes-Benz, widely considered the world’s oldest car company, is best known for its luxury vehicles. However, the staid German marque also has a long history of making commercial vehicles – such as the ubiquitous Mercedes-Benz Sprinter – as well as off-road vehicles, such as the G-Wagen.

The G-Wagen stands out as one of the toughest 4x4s money can buy… But ironically, it’s not even the most capable 4×4 Mercedes makes. No, that honour goes to the indomitable Unimog: a less famous but even burlier beast that can conquer even the most intense terrain.

A body-on-frame vehicle with short overhangs, insane ground clearance thanks to portal gear axles, boatloads of torque and an axle angle offset that a Jeep Wrangler owner could only dream of – the fact the agricultural, unrefined but tough-as-nails Unimog has a Mercedes-Benz three-pointed star on its front grille is rather incongruous. Since its introduction in the late 1940s, the Unimog has gained a legendary reputation for durability and insane off-road performance.

In the 80s, the Australian Defence Force bought over a thousand Unimogs (which were actually assembled locally), which saw service alongside the famous Land Rover Perentie. Since then, both the Perenties and Unimogs have been retired, replaced by G-Wagens and Rheinmetall MAN trucks respectively. But Unimogs have found a new life as a popular campervan conversion vehicle. Which makes sense – they’ve got a big truck bed you can slap a cabin on, and they can go just about anywhere.

This campervan conversion, however, might just be the cream of the crop. You’d certainly hope so, for $239,500.

Listed on Gumtree for sale in Blackbutt, Queensland, the owner describes this 1986 model year machine as the “ultimate ‘go anywhere’ vehicle,” relating that there’s been “no expense spared” with this comprehensive build.

Sadly, he hasn’t put as much effort into the photos – they look like they were taken with a potato – so some other features he’s neglected to mention included a custom ‘UNIMOG’ exhaust stack and an integrated navigation system.

$235k might seem like a lot of money to spend, but when you consider this might be the closest thing to a house on wheels, it’s rather competitive compared to the price of a one-bedroom flat in Sydney or Melbourne…

If you don’t have quite as much money in the bank but still want to get on board the Unimog wave, we’ve tracked down another two camper conversions on Gumtree that are a little cheaper.

This military-inspired Unimog on sale in Mount Helena, Western Australia features a similarly extensive campervan conversion, with heaps of storage and a nice big TV within the camper module. Unlike the previously mentioned conversion, however, it doesn’t have a fridge – so you’ve got to ask yourself, are you ok slumming it with an Esky? It’s going for $85,000.

Cheaper still is this example also in Western Australia, this time in Wangara. While not as aesthetically pleasing as either of the other two Unimogs we’ve talked about, it seems to have all the main kit you’d want, including a double bed and an external sunshade. Again, no fridge – but for $65,000, you could probably install one and still have plenty of money in the bank.

All three of these vehicles, however, look like they could survive an atom bomb dropped on them. With international borders still closed, more and more Aussies are choosing the #vanlife… And if you’re going to join them, you may as well do it in style. Unimog style.

Get in quick before these Teutonic terrors get snatched up.