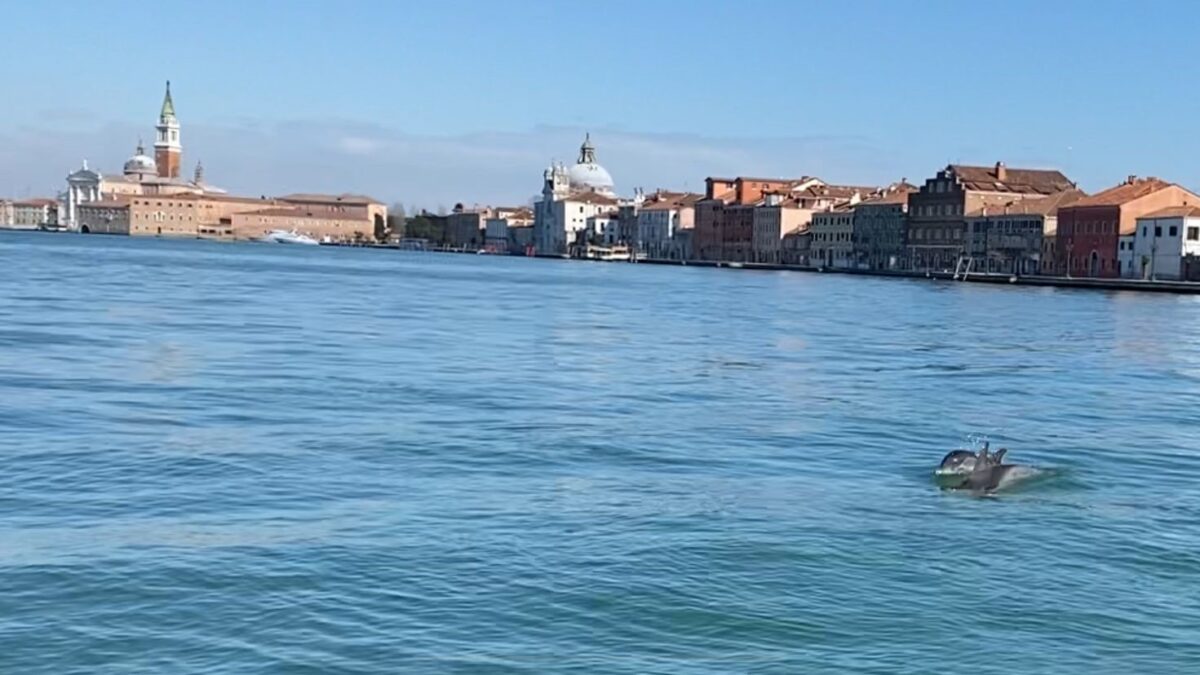 Venice is known for its canals, floods, architecture, gondolas and cruise ships. What it’s not known for is dolphins.

In fact, dolphins are so rare that when a fake video of them swimming in Venice emerged last year, it sent the internet loopy.

But this Monday, two dolphins really did stop by Venice, various media (from CNN Travel to Traveller) have reported.

Two dolphins were spotted swimming in the water of a Venice canal. The usually dark waters of the city’s canals have become cleaner because of reduced boat traffic pic.twitter.com/io589O8OCq

They swam up the iconic Grand Canal, before gliding over to Giudecca island, (presumably having a gander at the Renaissance era churches on their way), before returning to the Adriatic Sea.

They were stuck for a time, though the Cetacean strandings Emergency Response Team, from the nearby University of Padua, helped them navigate their way out of the maze.

Their visit was not seen in person by many – the city is currently in lockdown as Italy battles a third wave of Covid-19.

Traveller reports, “The two dolphins were photographed at the entrance to the Grand Canal, just off a promontory called Punta della Dogana.”

“It is thought they were drawn into the lagoon by shoals of fish, which are thriving after a year of lockdown because of the absence of tourism and a dramatic decline in boat traffic.”

DMARGE understands the dolphins in the footage are striped dolphins – a rare sighting in these parts.

They usually, according to the experts, rarely come near the coast – especially typically polluted places like Venice. The last time a striped dolphin was seen in the Venice lagoon was reportedly four years ago.

Some Twitter users claim it is even rarer – calling it a once in a lifetime experience.

Others suggested the absence of international tourism – particularly, in Venice’s case, cruise ships – could be the reason for the city regaining its magic.

It is nice to see what it takes when there are no more cruise ships. 🐬🐬🐬

As DMARGE reported last year, 2020 had one silver lining (among many gut punches) for Venice – it helped it realise the true nature of its over tourism problem.

RELATED: Venice Discovers True Nature Of Its Over Tourism Problem

Many tourist-dependant destinations around the globe, including Amsterdam, Croatia, Thailand and Australia are all taking this moment to reconsider how to bounce back stronger from the pandemic (in what has been dubbed a ‘Pheonix moment‘), making for a better experience for both visitors and locals alike.

Perhaps we shouldn’t be too eager to Rush Travel Back after all? Though we don’t want to go overboard with travel shaming or become a world of hermit kingdoms, it’s certainly worth taking our time with our return to travel, fixing existing problems, and doing it right.