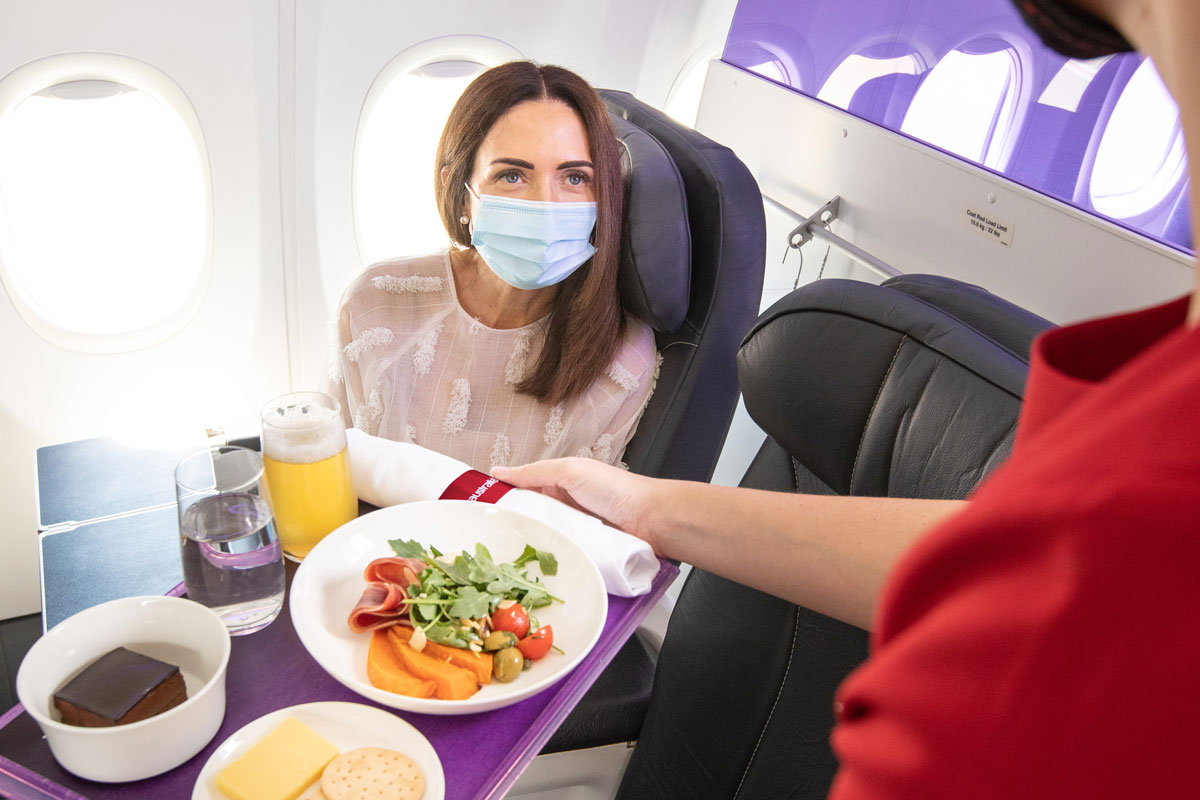 Virgin Australia has pulled the covers off a new Pointy End menu and it is Very Marie Kondo. No celebrity chefs have been involved this time round, and the focus is on cafe-round-the-corner style crowd-pleasers like smashed avo, lamb pies, and ham and egg rolls. 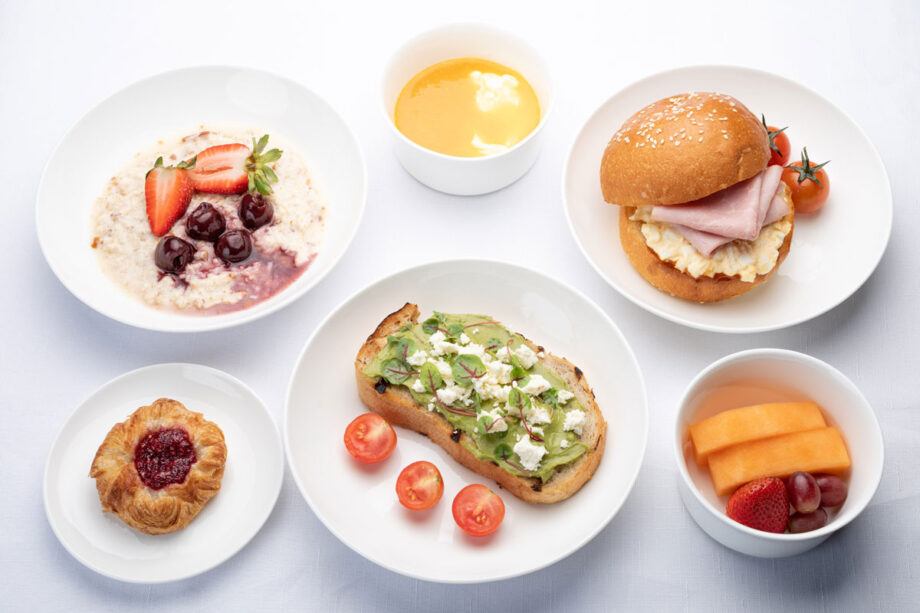 The new menu is part of the airline’s push to (further) reduce the cost of domestic fares from mid-year.

Were you paid to do this hagiographic article?

Disgusting the way you bang on like a school girl, the reason it came out was of course to distract attention away from the “mid level” economy meals ending.

Really bad if they cut these so quickly..

At the same time as announcing this new change, complimentary snacks have been chopped from the economy cabin – something aggrieving certain in-air Pringles fanatics, who have expressed their displeasure at the change (and its reporting) on Twitter.

Sad day when the aussie is so gullible that it acts as Virgi’s PR arm and misses the real story of the cessation of meals for the 99% of the rest of your readers..

Not a great start for the famous mid level strategy…

It would appear annoyed passengers like the above were unaware of further articles headlining the removal of snacks from economy (either that or, as seen below, media outlets like The Australian saw the criticism and quickly responded). 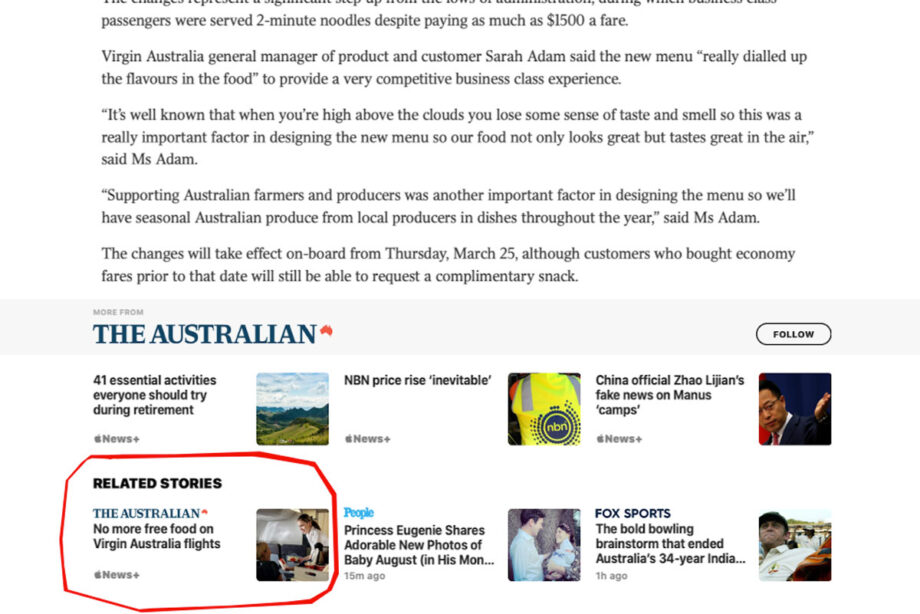 All business class meals will be made with locally sourced Australian produce, and served on tableware.

The menu comes with premium Australian wine and beer, soft drinks and spirits, and will be rotated bimonthly. 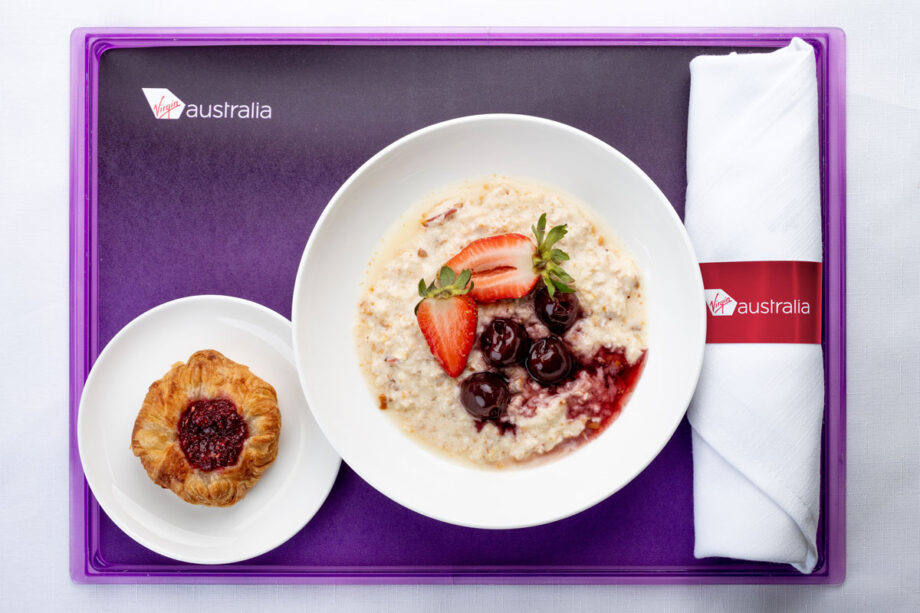 There is also a new ‘pay to play’ economy menu which is yet to be unveiled. Water, tea and coffee will remain complimentary across all classes.

The @VirginAustralia 2.0 menu. Not as good as before obviously but better than 2min noodles. Free flowing booze naturally remains. If you’re in economy you’ll need to buy a $9 sushi roll at the airport before boarding https://t.co/iztPDF4BIC

“Today’s customers are more conscious about what they consume than ever before,” new chief executive officer Jayne Hrdlicka said of the economy changes.

“We like to choose what we eat and what we drink throughout the day – we are simply extending that choice on-board as well.”

“By removing snacks that aren’t valued by our guests we’re able to structurally reduce airfares making it even cheaper to fly.”

Ms Hrdlicka said the new business class menu would be “high quality, relaxed, uncomplicated and exactly what our guests and team members have told us they want.”

We’re stepping up to the plate, and sky high dining is looking good ✈️ 🍽We’re excited to reveal our new Business Class menu and buy on board Economy offering, which launches across our network today. For more info: https://t.co/w8HnGq5ojN pic.twitter.com/BaZjn3i9RZ

Virgin Australia general manager of product and customer Sarah Adam said the menu was specially designed for eating at altitude: “When you’re high above the clouds you lose some sense of taste and smell so this was a really important factor in designing the new menu so our food not only looks great but tastes great in the air.”

“We’ve really dialled-up the flavours in the food with the right seasoning and textures to provide a very competitive business class experience for domestic travel in Australia.”

“Supporting Australian farmers and producers was another important factor in designing the menu so we’ll have seasonal Australian produce from local producers in dishes throughout the year.”

No reference was made to any specific focus on Yuppies, but we reckon the food speaks for itself.

In DMARGE’s humble opinion this menu could be served up on a wooden chopping board in Sydney’s Marrickville or Melbourne’s South Yarra and no-one would bat an eye.

Virgin Australia also announced that passengers can expect less wallet stinging airfares by June, which follows a 20% drop in fares in November.