Who knew? You don’t need $10 million in venture capital, or even a guided app, to meditate like a pro… 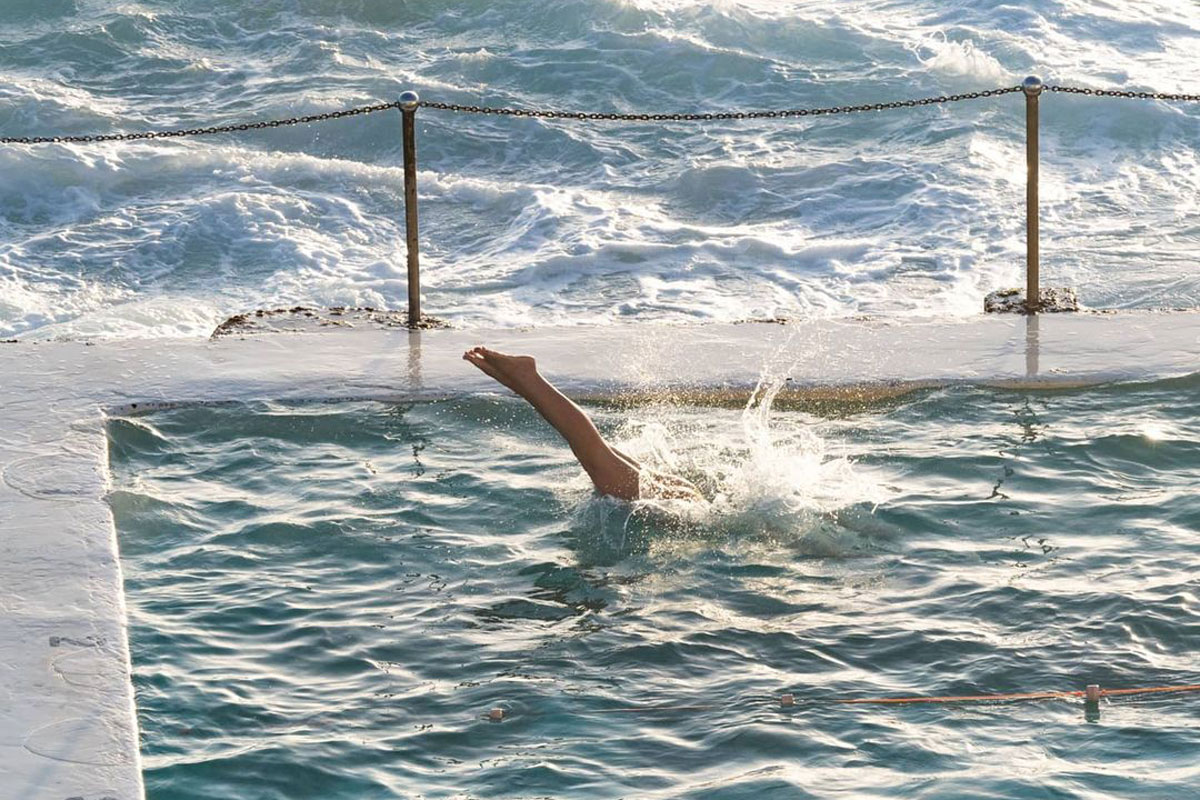 We may not be a global powerhouse of Big Macs or blockbusters, but there are a few areas Australia leads the world in – rock/reggae fusion, coffee snobbery, activewear, waterfall chasing, abusing the word wholesome; brunch.

There may now be another feather we can add to that cap – making meditation cool again.

RELATED: ‘Unfairly Maligned’ Bondi Trend The Rest Of The Australia Can Learn From

Australians are getting more into meditation than ever. Rather than it be a ~cringe~ hobby some Silicon Valley millionaire says you should be doing, it’s now more and more just a casual activity you see people doing on the grass (or at the beach).

Speaking of Silicon Valley millionaires… People call you crazy until they call you right. So even though you might roll your eyes at aspects of ‘LA inspired’ Bondi, Byron, Bali triangle, where much of our ‘spiritual’ rhetoric comes from, they aren’t the only ones doing it – and there are some huge lessons we can take from them.

One of them is to care less about what people think. Another is to learn to meditate.

To get some top tips on being in the moment, DMARGE recently spoke to Australian big wave surfer, author, keynote speaker and Lexus Australia ambassador Mark Visser, who told us the key to getting started is to realise meditation not a limited thing.

Mark is the creator of the Elite Mindset program, a system that helps you unleash your inner demons usefully. Mark has also, among other things, spent 18 months with a professor in the forest of Ubud, as well as worked with the likes of Kelly Slater, the Melbourne Demons AFL team, and the Australian Military.

“I think it’s awesome that people are taking the time to just check in with themselves,” Mark told DMARGE of the growing trend of beach meditation.

“When I first started working in this space, when someone said to me that I had to meditate, I found it almost a little bit of rigid in the sense that I felt like I had to follow a certain set of rules.”

“But the cool thing about meditation or, or whatever you want to call it, is all you’re really doing is checking in with yourself. There’s no set way to do that. So it’s awesome that people are starting in a way and figuring out what that way is, and whether that’s sitting on the [meditation mile] wall at Bondi, and that’s their first exposure to it then that’s fantastic.”

In other words: it doesn’t matter so much how you get there, so long as you can simply “be.”

“But really tuning in on things is key. Like now you might be listening to the sound of wheels going over gravel, or feeling your feet as they crest through sand when you walk or if you’re walking on grass – the blades of grass, connecting to to your feet.”

Many of us, to an extent, actually practise a certain type of meditation, then, without knowing it. Just take the Australian ritual (among some) of going for a daily morning swim even in winter (a coastal retiree favourite).

As we reported last year, this winter act of worship is sculpted into the Australian psyche to the point where even those that are on a bus at 7am (and slumped in the office by 9am) follow accounts like Sprout Daily and Morning Bondi to get their daily dose (when they can’t physically make it down).

As Mark told us: “One of my coaches many years ago told me when you’re really stuck in your head, or when you’ve got a lot of stuff going on, ‘Tell me what grass feels like.’ And I remember just going ‘that’s the stupidest thing ever.’ But he was like, ‘No, no, seriously, tell me what grass feels like.’ And he wanted me to actually be able to walk along grass and be able to feel it.”

“So my understanding of meditation is not necessarily sitting there and saying ‘omm’, or whatever it is that it’s perceived that you might need to do, it’s really about connecting to yourself.” 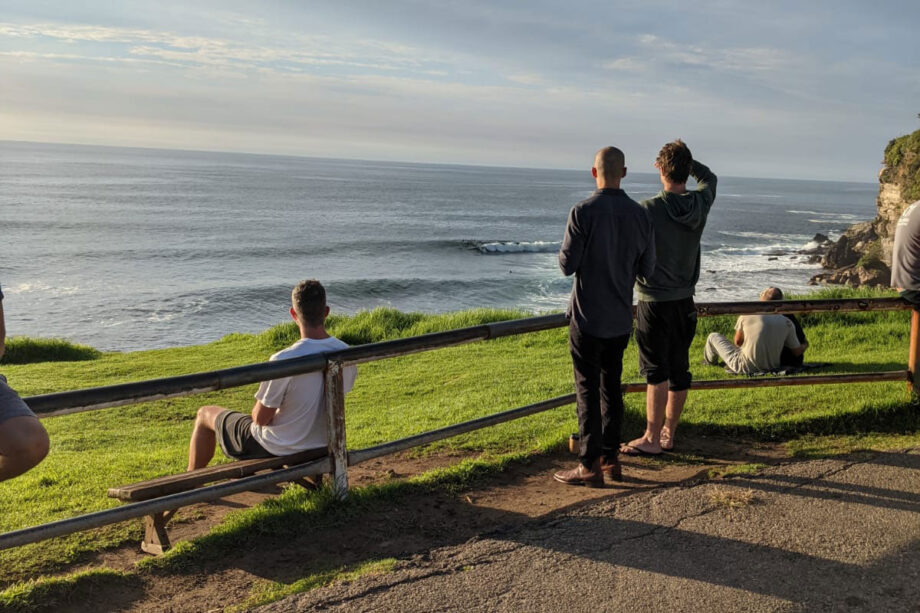 Watching the waves could even count as meditation too… Image: South Avalon carpark, shot by DMARGE.

“How you do that is starting with finding the ability to feel and that might be simply noticing the wind on the back of your neck or through your hair or the numbness of your feet where they are connected to the ground.”

“But it’s hard to notice – to actually feel that – when there’s so much noise going on through your mind. So the principle of feeling the grass blades was really all about just almost closing your eyes and feeling and walking slow to the point where you can go: ‘okay, I can actually feel the grass.'”

“When I could feel the grass and really tune into that feeling and completely stop thinking and stopped worrying about whatever it was is I had to switch off.”

“That’s the cool thing: it doesn’t have to be a set way. Meditation can be done by playing music. It can be done by, you know, spending time with friends. And it might be just going for a bike ride or doing all those other things that I mentioned before.”

“It’s really finding an opportunity where you can just be in the moment – where you’re present and you’re not doing anything other than just being aware of what’s happening right now.”

Meditation can also open your mind to all sorts of new ways of thinking, clarify your goals, and in the long run materially improve your life. Mark tells DMARGE that was the case with him, with meditation helping him find synchronicity in his personal and professional life.

“For me, being able to work with a company where we have the same ways of doing things [is great]. For example, Lexus has these programmes called, Encore Programmes where they give super value to people. For me to be able to work with companies that do that, it’s really important.”

What if you’re one of those people who struggles to be “in the moment” though, and spends dawn until dusk either working or replacing your inner monologue with entertainment like music, podcasts and Netflix?

“It’s just like strength training,” Mark said. “I’d switch off for like, a minute at a time, and then all of a sudden totally want to watch what was on TV, or I was on Instagram, or I was sucked into Facebook.”

“Then the next day, you might be like, ‘cool, I’m just gonna give it two minutes.’ So it’s conditioning. And I remember for me, I have a highly active mind. When I started getting involved in the underwater training and things that I was doing, I found it almost impossible to relax and stay still.”

“But over time, the mind is almost like a muscle that needs training. My advice would be: you don’t have to go straight into some kind of 30-minute hardcore thing. Just ease your way into it and work off the principle of what feels good [while also setting yourself little goals of time increment].”

Focussing on breathing can also help you improve at this, Mark said, explaining: “there’s a great technique that you can do by breathing in through your nose, and out of your mouth.”

“By going in through your nose, it activates different nervous systems. And what that does is allow you to see things really rationally and really calmly. But it also allows you to open up your peripheral vision. And you can actually access that just by breathing through your mouth.”

Mark also emphasises not to put too much pressure on yourself, and to cut yourself slack, in the knowledge you can always try again next time.

Interest piqued? We recommend checking out Mark’s Elite Mindset program, or tuning into one of the many guided meditation sessions now available online (see Australian surfing legend Tom Carroll’s below).