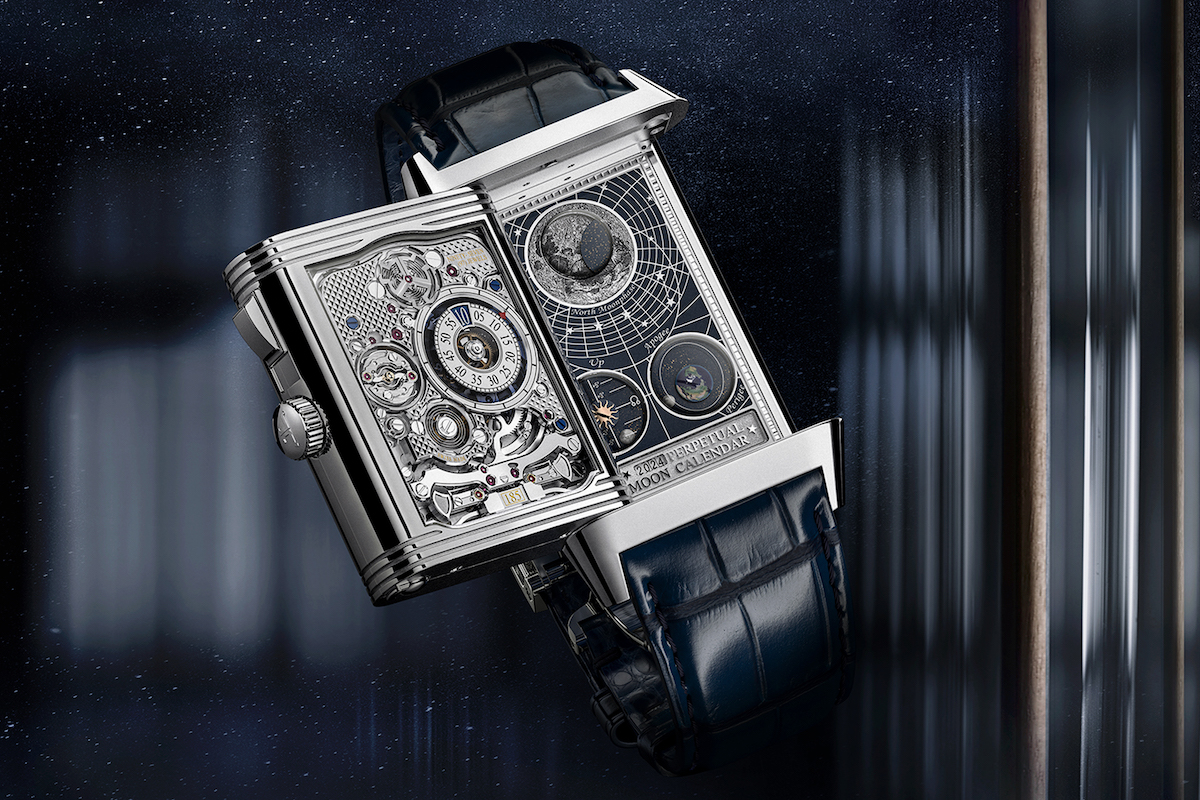 Jaeger-LeCoultre is often called “the watchmaker’s watchmaker”: reference not only its reputation as the watch industry’s pre-eminent movement designer and supplier but also emblematic of the fine timepieces they themselves produce that appeal to even the most discerning customers.

Their list of inventions and innovations spans almost two centuries and contains a number of world firsts, but their latest world first is one of their most breathtaking yet – and it’s highly appropriate that it comes in the form of perhaps their most forward-thinking, famous watch ever.

First introduced in 1931, the Reverso is an icon of the watch world, with its novel rotating case and timeless Art Deco design. Its signature feature was designed to prevent damage to the watch during the rough-and-tumble of a game of polo, but JLC has also used it as a way to experiment with multiple complications in a single timepiece, such as two-faced watches.

But their latest Reverso, unveiled during this year’s Watches & Wonders, takes the Reverso’s multitudinous nature to the next level. The Reverso Hybris Mechanica Calibre 185 Quadriptyque (ref. Q7103420) isn’t just the most complicated and visually stunning Reverso ever made, but it’s also the world’s first watch with four functioning display faces.

While JLC have produced many Reverso models that display information on the two faces of the main watch case – such as the Duoface Small Seconds – the Quadriptyque cleverly takes advantage of the Reverso’s carrier case itself, which adds another two faces to the watch itself.

The Quadriptyque features a whopping 11 complications, including a perpetual calendar, tourbillon, minute repeater and indications of the synodic, draconic and anomalistic cycles (never before presented together in a wristwatch).

Despite this treasure trove of complications, the watch has a surprisingly small form factor, with case dimensions of 51.2 x 31mm and a thickness of only 15.15mm. It even has a 50 hour power reserve – more than many other watches that can only tell the time. A white gold case and an alligator strap add to the luxury and elegance of an already breathtaking watch. 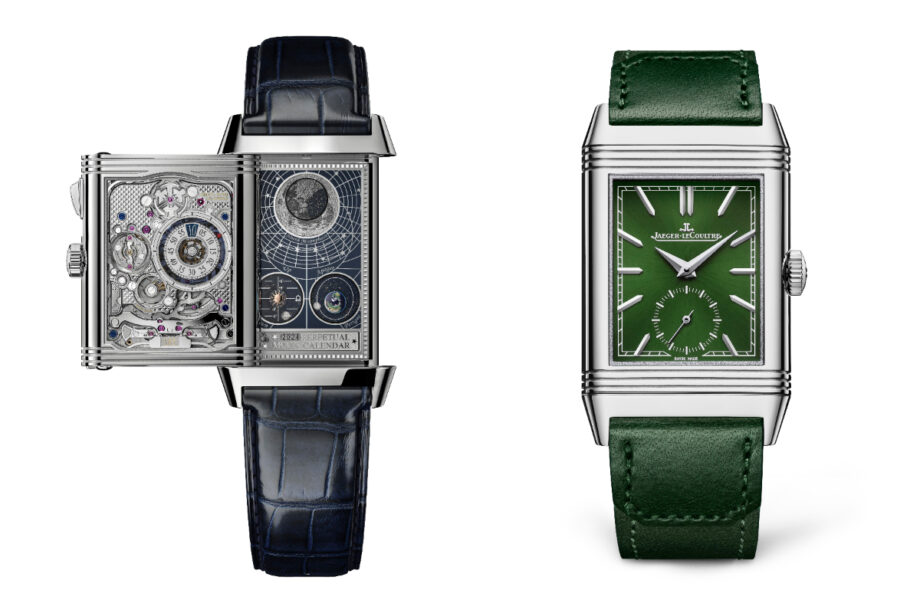 A limited edition of only 10 pieces, the Quadriptyque is a triumph of haute horlogerie and something that hardcore watch fans are sure to be talking about well into the future. But the Reverso’s 90th-anniversary celebrations don’t stop there…

Earlier in February, DMARGE made the bold call that the ‘next big thing’ in watches would be green dials. It seems as if the world’s top manufacturers also believe that’s the case, with brands like Panerai, Patek Philippe, and Tudor (just to name a few) revealing exciting green dial models during W&W – with more soon to follow from other brands as the show continues.

JLC’s also joined the green dial revolution (pun entirely intended) with a tasty new Reverso Tribute Small Seconds (ref. Q3978430) in a particularly verdant shade that, according to the brand, evokes the deep green of the pine forests that surround their maison in the Vallée de Joux.

The sunray-brushed lacquer dial and matching calf leather strap look stunning: the Reverso has always been a canvas for artistic expression and it simply looks great in green.

From colours and complications to fine jewellery: the third Reverso reveal JLC blessed us with at W&W was four new Métiers Rares (Rare Handcrafts, for the less Gallically inclined). Inspired by the fine jewellery of the 1920s, the Reverso One Precious Flowers collection features luscious floral motifs that exemplify JLC’s gem-setting and design talent. 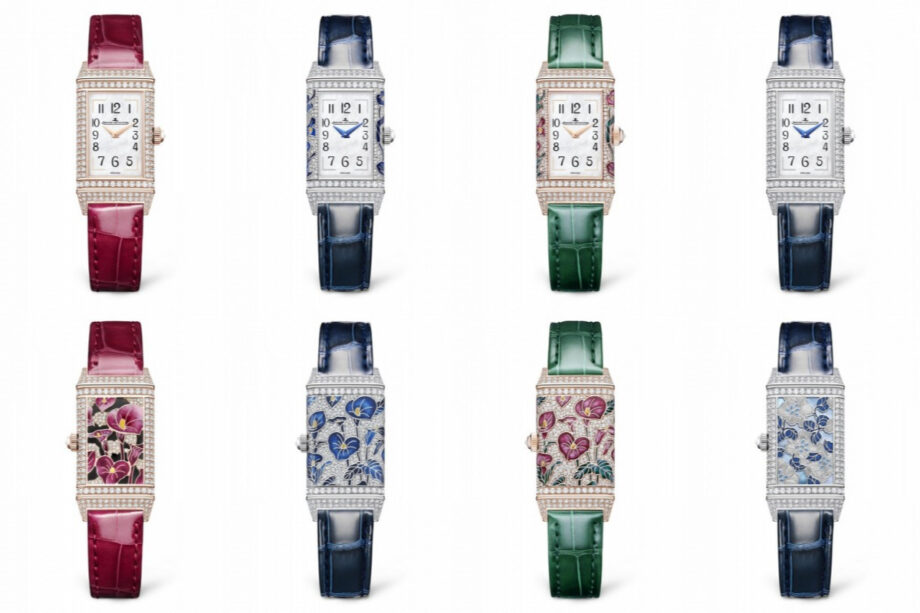 You know how we were just talking about artistic expression? Where the Quadriptyque uses the Reverso’s obverse and carrier case to show off technical wizardry, these four use the Reverso as a mobile art gallery, with precious stones as their palette.

Two of the references are pink gold, two are white gold. Three feature arums, one features lilies. They all display meticulous enamelling and a mother-of-pearl dial… And they’re all exquisite.

High complications, master jewellery, beautiful colours… it’s a fitting celebration of the Reverso, a watch that continues to hold an exalted position in the pantheon of luxury watchmaking. Bravo, Jaeger-LeCoultre.