“We are getting aggravated.”

The only thing that’s possibly wilder than getting in a car with Lewis Hamilton is keeping track of his experiments in style.

Hamilton is not only Formula One’s most successful competitor (potentially of all time) but he’s also one of the sport’s most stylish gents. If his race record and star power didn’t already make him stand out among the grid of drivers, his love of luxury couture, niche streetwear and bright colours sure does.

Hamilton often gets favourably compared to Michael Schumacher but his latest outfit naturally brings to mind a comparison with a set of movie characters… And not necessarily a favourable one, it must be said.

Stepping out ahead of practice at the Emilia Romagna Grand Prix in Imola, Hamilton rocked a washed-out Christian Dior ensemble consisting of a matching jacket and pair of trousers, as well as a pair of in-demand Dior x Air Jordan 1 sneakers.

It’s not a bad outfit per se, but with Hamilton letting his dreads loose, it reminds us of ‘The Twins’ from the 2003 sci-fi action film, The Matrix Reloaded. Talk about taking the red pill… 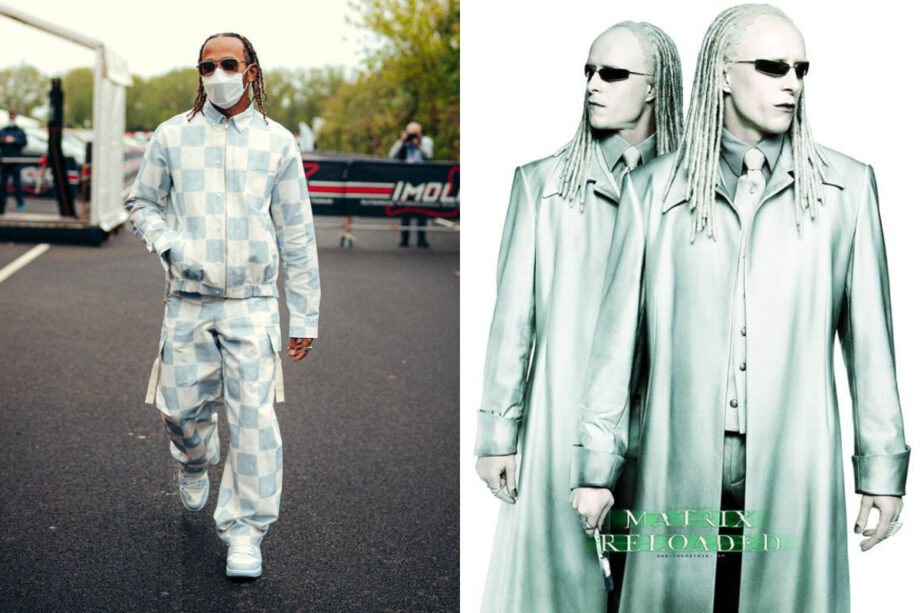 Showing you how deep the rabbit hole goes.

The Twins are a pair of ghost-like villains who appear in one of the franchise’s most memorable moments, the freeway chase scene. While most of the Matrix trilogy was filmed at Fox Studios Australia in Sydney, the freeway scene was filmed at the decommissioned Naval Air Station Alameda in California – the producers having constructed a 1.5-mile freeway on the base’s old runways specifically for the film.

The outfit’s got us asking ourselves: is Hamilton considering a second career as a movie star? There’s some precedent for that, actually. Hamilton has cameoed in the Disney/Pixar films Cars 2 and Cars 3, as himself and as a voice assistant respectively.

All jokes aside, we actually quite like the outfit. Hamilton has a real flair for patterns and knows how to make a statement. It’s a damn sight better than the boring team uniforms or uninspired athleisure looks we normally see from F1 drivers off the track.

The Emilia Romagna Grand Prix in Imola kicks off this weekend, with fans keen to see the rivalry between Hamilton and Red Bull’s Max Verstappen heat up. Like last year, we’ll see multiple Grands Prix in Italy in 2021, with the Italian Grand Prix proper set to take place at Monza on the 12th of September.