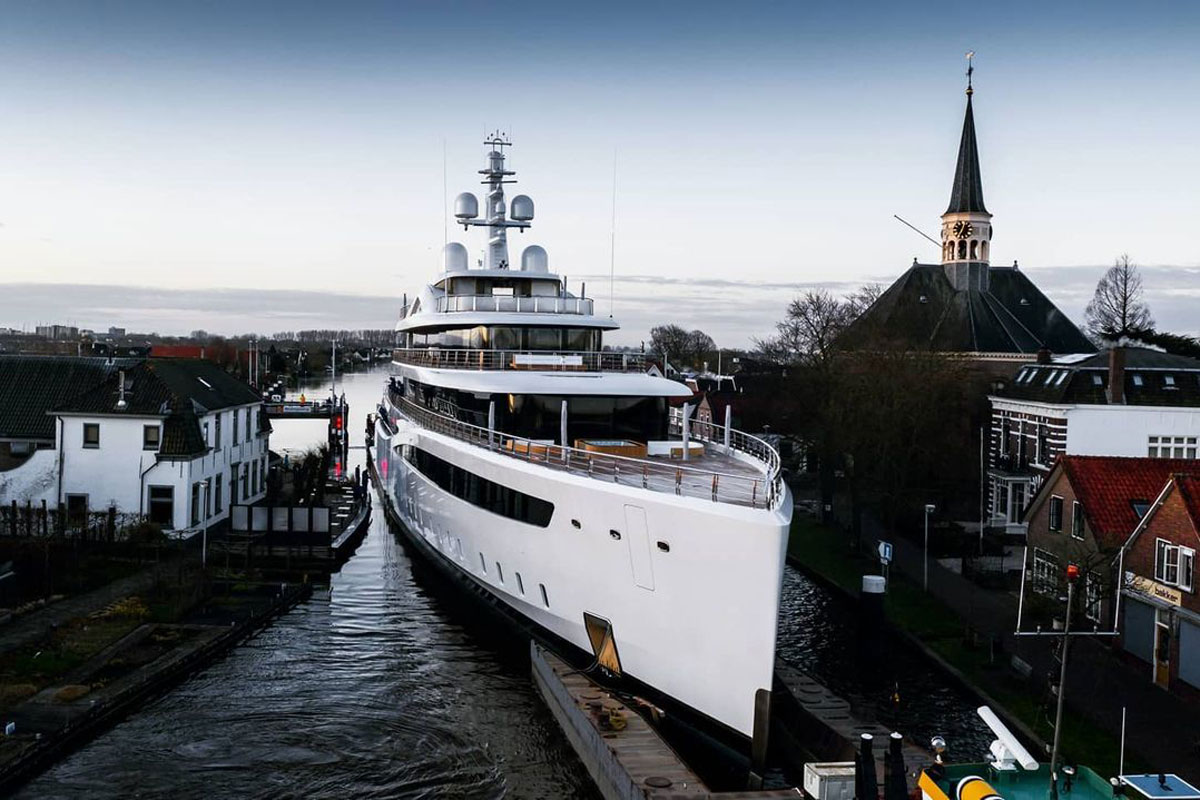 In scenes that wouldn’t look out of place in a Banksy mural, a 300ft (94 metre) superyacht has been spotted sneaking through the narrow canals of the Netherlands.

It’s not a dream though: photographer Tom van Oossanen snapped the astonishing scenes as Project 817, built by Dutch shipyard Feadship, was guided from its Kaag Island facility to the North Sea at Rotterdam last week.

“In a series of stunning images, the vessel, one of the largest to be launched in 2021, is guided through the water with tugboats, passing by houses and churches, as crowds look on in amazement,” CNN Travel reported on Thursday.

Apparently there’s an inland shipyard in the Netherlands where they build super yachts. And after they are finished they have to drag them through canals to Rotterdam creating these weird juxtapositions. https://t.co/hGzpFYJEWq Image via Tom van Oossanen https://t.co/laFWsxWQXG pic.twitter.com/cnoWt0BKoy

Oossanen told CNN Travel four to six superyachts are transferred along this route each year before going for sea trials. Few, however, are as big as Project 817, “likely to be known as Viva when it officially launches,” CNN Travel reports.

Oossanen also spoke to The Daily Mail, explaining that tugging the 88ft high vessell through houses, church spires and windmills, and squeezing its 44ft wide body though canals, some of which were only 46ft (14m) wide, was a “very delicate operation.”

He explained to The Daily Mail that pontoons were attached to the front and back of the yacht to lift her out of the water slightly, otherwise she would have been too deep for the canals.

The crew also “covered the sides of the ship with very thin wooden boards wrapped in fabric to protect her pearl-white finish at the tightest spots,” The Daily Mail reports.

Oossanen shared with DMARGE that the vessel was specifically designed to fit the waterway and to be able to make its way out.

“An extra centimetre wouldn’t fit most likely. 94 metres on the waterline is the actual limit to be able to make some turns.”

He also told us, “As far as I know the locals love it! They’re always watching and taking loads of pictures.”

Oossanen also said he believes this may be the last time a boat this big takes this route, due to a new facility opening in Amsterdam with the capacity to build superyachts up to 160 metres long.

“The Dutch government,” CNN Travel reports, “has also confirmed plans to widen the locks at nearby Kornwerderzand, which ultimately means larger vessels will be able to sail directly from Makkum to the North Sea in the future.”

“They can easily build up to 160 meters in a new facility, so why would they still transfer such a big boat through all these canals and go through all the hassle?” Oossanen asked CNN Travel.

“Knowing the inside information, I think seeing a 94-meter doing this route is either going to take a while, or might not happen [again] at all.”

Speaking to DMARGE, Oossanen added, “It will happen again, but a 94-metre vessel in the near future is quite unlikely.”

All the more reason to kick back and enjoy this rare view.