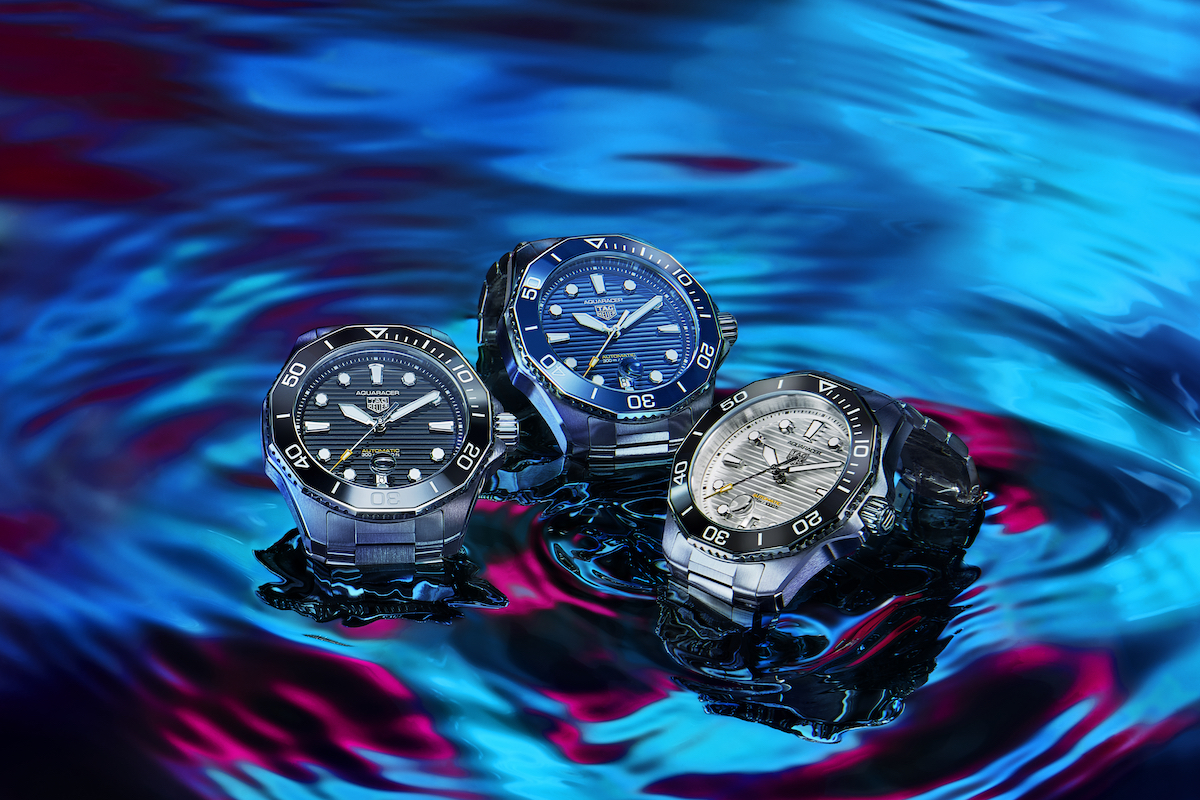 We’re now three days into Watches & Wonders, the watch industry’s most important trade show, and hype among watch fans is now at a fever pitch.

Dozens of brands and hundreds of new watches of all different shapes, sizes and functions have been revealed thus far, but some of the most exciting releases have been dive watches, such as those unveiled by Oris, Panerai and Tudor.

You can add TAG Heuer to that list, too, as their W&W reveal – the new Aquaracer Professional 300 diver’s watch – has raised the stakes even higher.

With eight new models (including one limited edition), this Aquaracer update is a lot to take in. So let’s dive in. Pun entirely intended.

The green stands out not only because of its verdant colour but also because it’s constructed from sand-blasted, grade 2 titanium instead of stainless steel (similar to the limited-edition Aquaracer Bamford TAG Heuer released last year). 2021 has truly proven to be the year of the green watch, with TAG Heuer joining brands like Audemars Piguet and Patek Philippe on the green watch hype train at W&W 2021.

The face of the watch, too, features plenty of changes. Most notably, the angular indices of the older model have been swapped out for octagonal numbers that evoke classic dive watch styles with a subtle, individual touch. The date window has been moved from 3 to 6 o’clock, with its cyclops lens now sporting a perfectly spherical design. The hands have also been tweaked: they’re now smaller overall, with the hour hand becoming tapered instead of boxy. 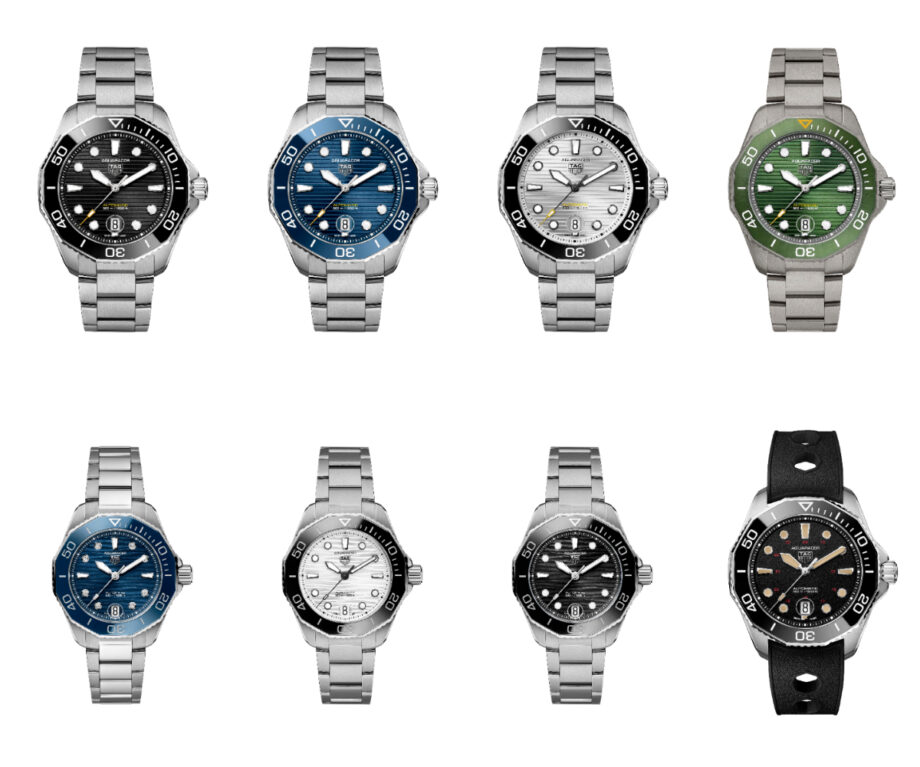 But they haven’t thrown the baby out with the bathwater. The dial might longer read ‘Calibre 5’ but that movement still powers the Aquaracer Professional 300: a hardy, tried-and-tested automatic calibre, it features a 38-hour power reserve. TAG Heuer’s clever metal bracelet stays the same, as does its 300m water resistance.

On top of the 43mm models, TAG Heuer has also revealed three new 36mm models, which not only reflect the growing demand for smaller watch sizes among men but also how the typical gender roles are becoming increasingly blurred in modern horological fashion. Tastes are changing, people.

The black dial/black bezel option (ref. WBP231D.BA0626) and the silver dial/black bezel option (ref. WBP231C.BA0626) are similar to their 43mm siblings but feature a few key differences: their dials feature a more abstract, wavy pattern instead of parallel lines, and the text reading ‘AUTOMATIC’ at 6 o’clock omits the orange colouration of the larger models.

The blue dial/blue bezel option (ref. WBP231B.BA0618), however, features eight diamond indices: a subtle little touch of bling. You’d assume it would be aimed at a feminine audience but quite frankly, it’s so seamlessly introduced we could see even macho men wearing it. See our previous point about changing watch tastes. 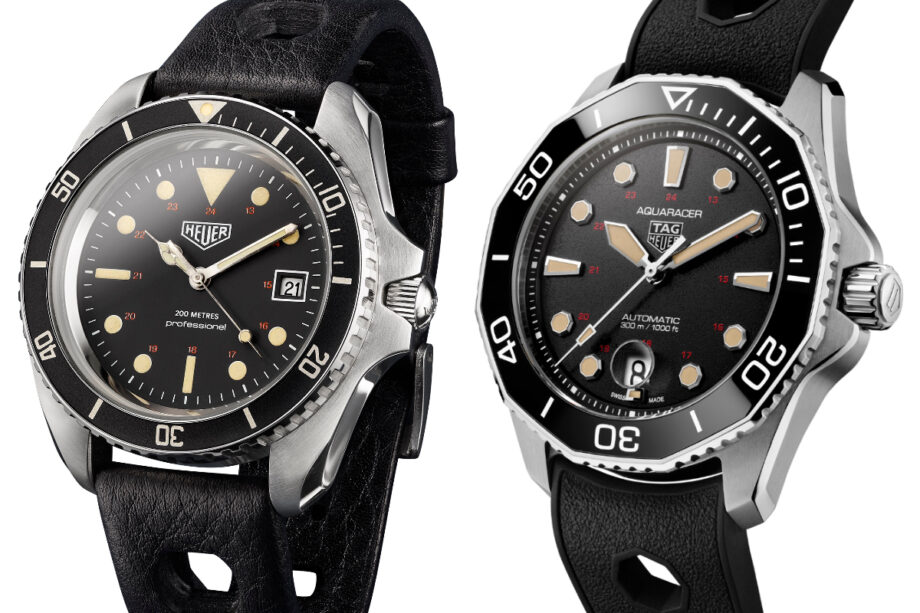 Its flat black dial shares the ref. 844’s iconic red 24-hour scale, and features aged lume indices for a nice vintage touch. Unlike the original, it boasts a titanium case as well as the modern Calibre 5 movement, and its very retro strap is made from rubber, instead of the original’s leather.

The angular theme of the other 2021 Aquaracers finds its way onto this tribute model, too: the octagonal indices, the faceted bezel, even the perforations on the strap are octagonal. It also has the 6 o’clock date window design and location of the other 2021 models.

It’s an exquisite homage to the classic ref. 844 that, refreshingly, doesn’t try too hard to emulate the original… It’s got the aesthetics of an old watch with all the quality-of-life of a modern one. Fittingly, only 844 examples of this timepiece will be made.

RELATED: ‘Sporty’ Watch Selling Trick That Can Make You Thousands

All in all, the new Aquaracer is a more refined, more stylish watch compared to its predecessors that keeps everything that was good about the old model and simply trims the fat. These eight models are all truly delightful – and we’re excited to put them on our wrist.