Talk about stealing the show… 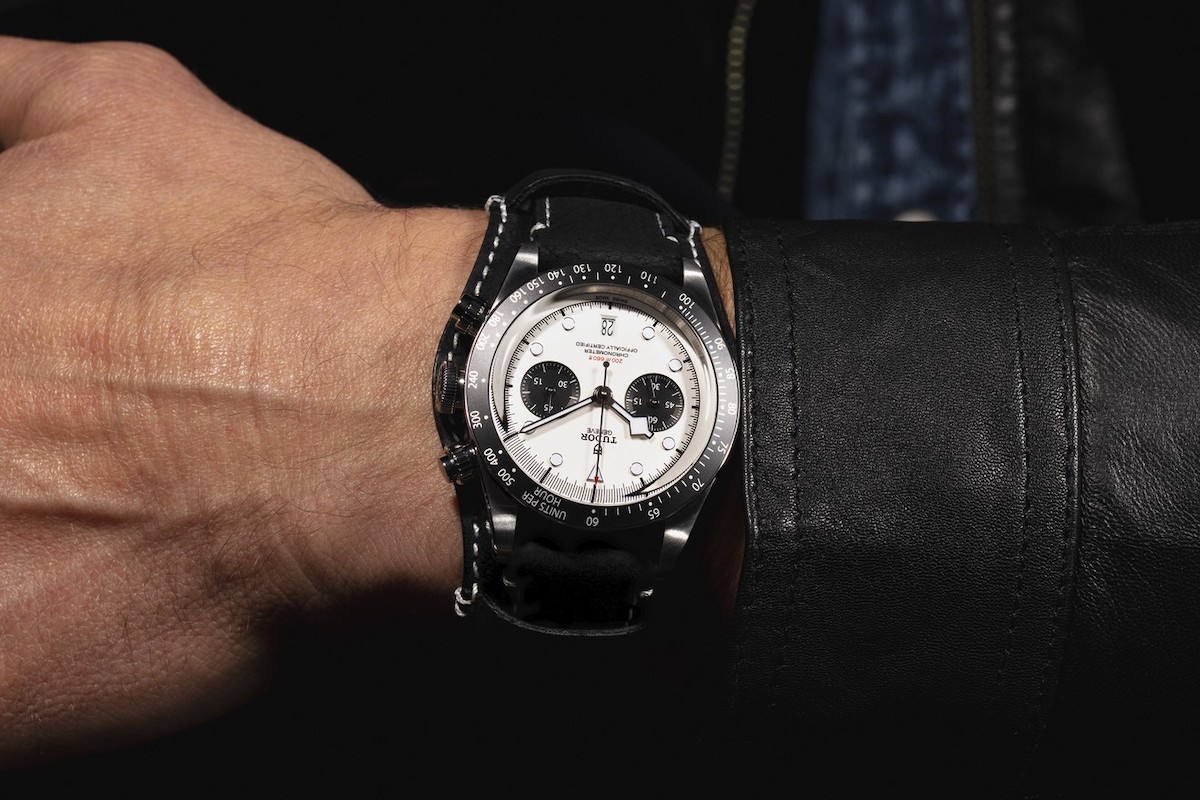 Watches & Wonders – the watch industry’s most important trade show – is now in full swing. We’ve already had a bevy of high-profile announcements from brands like Jaeger-LeCoultre, Patek Philippe and Vacheron Constantin, but one of the most exciting releases so far has been Tudor’s.

In the lead-up to W&W, Tudor had been more tight-lipped about its upcoming releases, unlike sister brand Rolex, who had their product presentation just before Tudor’s and had more or less showed their hand with an unsubtle teaser video. Tudor’s teaser was a lot more abstract, showing just puffs of smoke: Tudor was stung last year with the popular Black Bay Fifty-Eight ‘Navy’ getting leaked ahead of release, so it’s not surprising they took a more restrained approach.

Everyone thought that Tudor would be unveiling a new Black Bay GMT with a ‘Coke’ bezel, but the watch fraternity was rapturous to discover that their big-ticket new model was the relaunched Black Bay Chrono – one that features a colour scheme familiar to even the most novice of watch nerds.

Available in either ‘panda’ (white with black subdials) or ‘reverse panda’ (black with white subdials), these two Black Bay Chronos closely resemble the legendary Rolex Cosmograph Daytona ‘Big Red’, as popularised by legendary American actor and bon vivant Paul Newman. These Daytonas are some of the most desirable watches of all time, period – so Tudor coming out with two, highly modern, very beautiful but very affordable ‘People’s Daytonas’ is an absolute masterstroke. 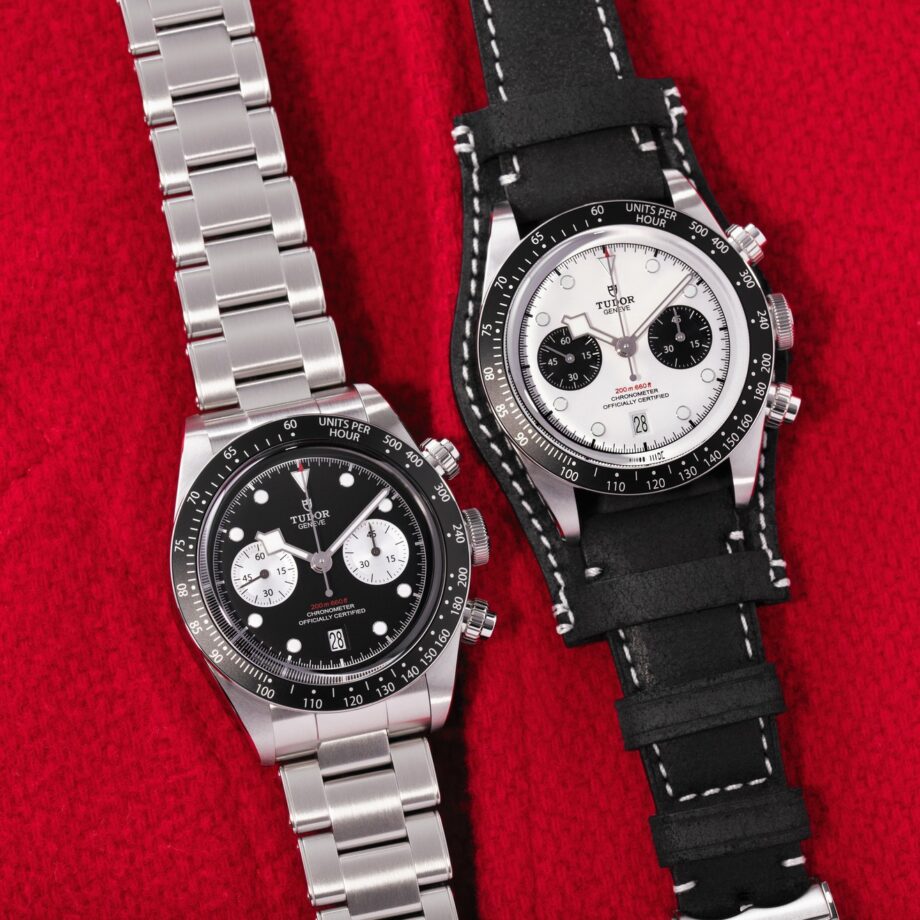 Unlike those Paul Newman Daytonas, the Black Bay Chrono boasts an impressive 200m water resistance, Tudor’s iconic ‘snowflake’ hands and two subdials instead of three: the Daytona’s minutes subdial at 6 o’clock replaced instead with a date window. While the homage is obvious, it’s still very much a Tudor Black Bay – which is to say, it’s one of the best sports watches on the market.

There’s been a subtle change to the Black Bay Chrono’s architecture with a new, slimmer case, but the rest of the watch has been largely untouched. It still uses the Tudor Calibre MT5813 developed in association with Breitling and comes with three different strap options: a leather ‘Bund’ strap, a woven jacquard number, or a classic steel bracelet.

RELATED: Breitling’s Latest Chronograph Watch Collection Is A Trip Back To The Future

In short, it’s a very clever, very desirable release from Tudor. Both options look stunning and with a retail price of only 7,070 AUD for the steel bracelet we predict this one will be snatched up quickly (compare that to the Paul Newman, examples of which regularly fetch in excess of 500,000 AUD). 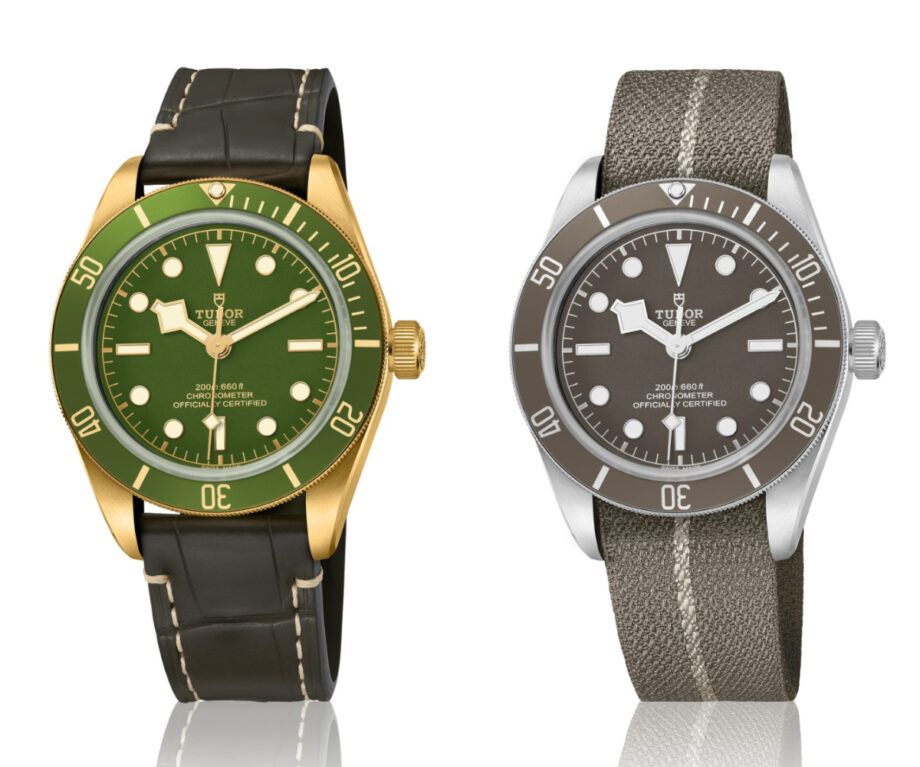 The Black Bay Fifty-Eight 18K is a truly sumptuous watch, with the lustrous brushed gold paired with a ‘golden green’ dial and bezel. We’ve already discussed here at DMARGE how green dials are the ‘next big thing’ in modern watches, so to see Tudor come out with such a verdant colour for this gold watch is truly exciting. It’s available on either a brown alligator leather strap or Tudor’s very comfy fabric strap.

Gold watches are somewhat common, but silver watches are less so, which makes the Black Bay Fifty-Eight 925 a particularly special beast (and by no means comes ‘second place’ to the gold). If its silver construction wasn’t unique enough, it also features a taupe dial and bezel – grey with a tinge of brown, it’s a rather unusual colour, but one we think pairs brilliantly with the clean silver of this Black Bay. Like its gold sibling, it’s available with a fabric strap, but its secondary strap option is instead a dark brown tumbled leather number.

Both watches also boast another first for the brand: open case backs on a diving watch, which show off the Tudor Calibre MT5400 that powers the pair. Unlike these watches’ cases, the movement is made out of stainless steel – a relief, frankly. We don’t know how well a silver movement would function…

Tudor also announced a few updates to their 1926 dress watch line, as well as among their Black Bay 41/36/32 models, which you can discover below:

In comparison to Rolex’s reveals, which were far more iterative and restrained, Tudor’s presentation stands out as a real delight. Have they upstaged their more expensive sister brand? We’ll leave that up to you to decide.