When you’re a man who can quite literally afford anything, there will naturally come a time (or several) when you have to have something that nobody else has. Something exclusive and personal to you that nobody else can imitate. It doesn’t necessarily have to be anything too outlandish, either, as LeBron James just proved with a one of a kind Patek Philippe.

Taking to Instagram with the past few hours at the time of writing, King James posted an image of himself, presumably whilst in Phoenix, Arizona, for the second game in the first round of playoffs in the Western Conference. Whilst his outfit, as ever, was on point, it was his watch that drew our eyes. At first, we were a little unsure as to what it was, but then we realised LeBron has played the oldest trick in the book when it comes to scoring yourself a new watch: change the strap.

RELATED: The Cheapest Way To Get The ‘New Watch Feel’ With Your Old Watch 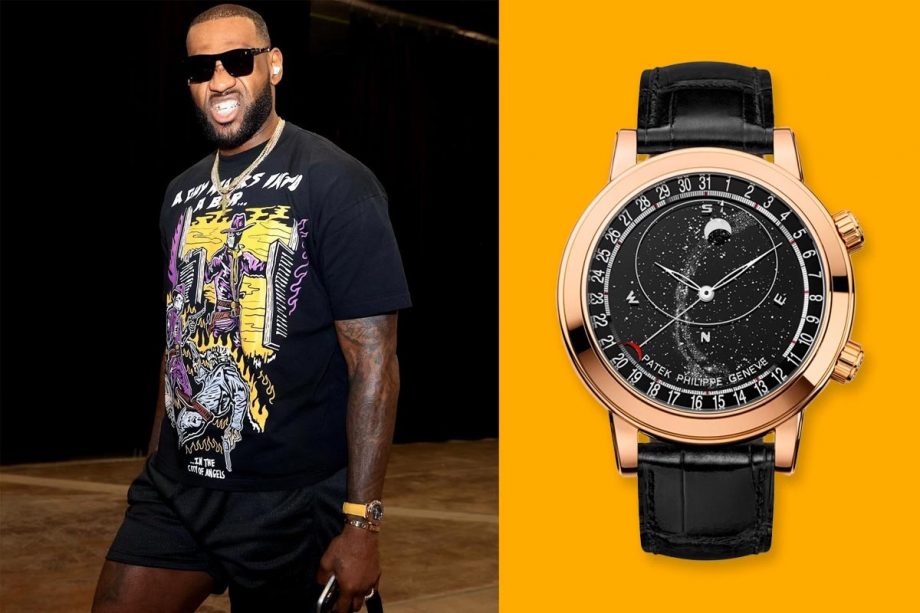 Yep, he’s taken his current Patek Philippe 6102R Celstial, removed the black alligator leather strap and switched it out for an LA Lakers-approved yellow number instead. Not only does it complement the yellow colouring on his printed t-shirt, but it makes for a far more eye-catching accessory than a ‘vanilla’ black strap. It wouldn’t have necessarily been a costly change either, but one that gifts LeBron a timepiece that nobody else will have.

The standout feature of the Patek Philippe 6102R Celestial is the ‘Sky Chart’, which comprises three sapphire disks: two black sapphire crystal disks for the sky background and moon phase, and a transparent disk for the sky chart and Milky Way. The dial can be used to follow the phase of the Moon in orbit at any given time, as well as showing you the view of the sky visible from Geneva and all other cities located on the same latitude.

It’s a highly complicated watch, which goes some way to explaining its US $250,000 price tag. Pocket money for LeBron of course, but the switch up the yellow strap makes it almost priceless.

Coupled with his Cartier Love bracelet, LeBron is in ownership of a seriously enviable wrist.