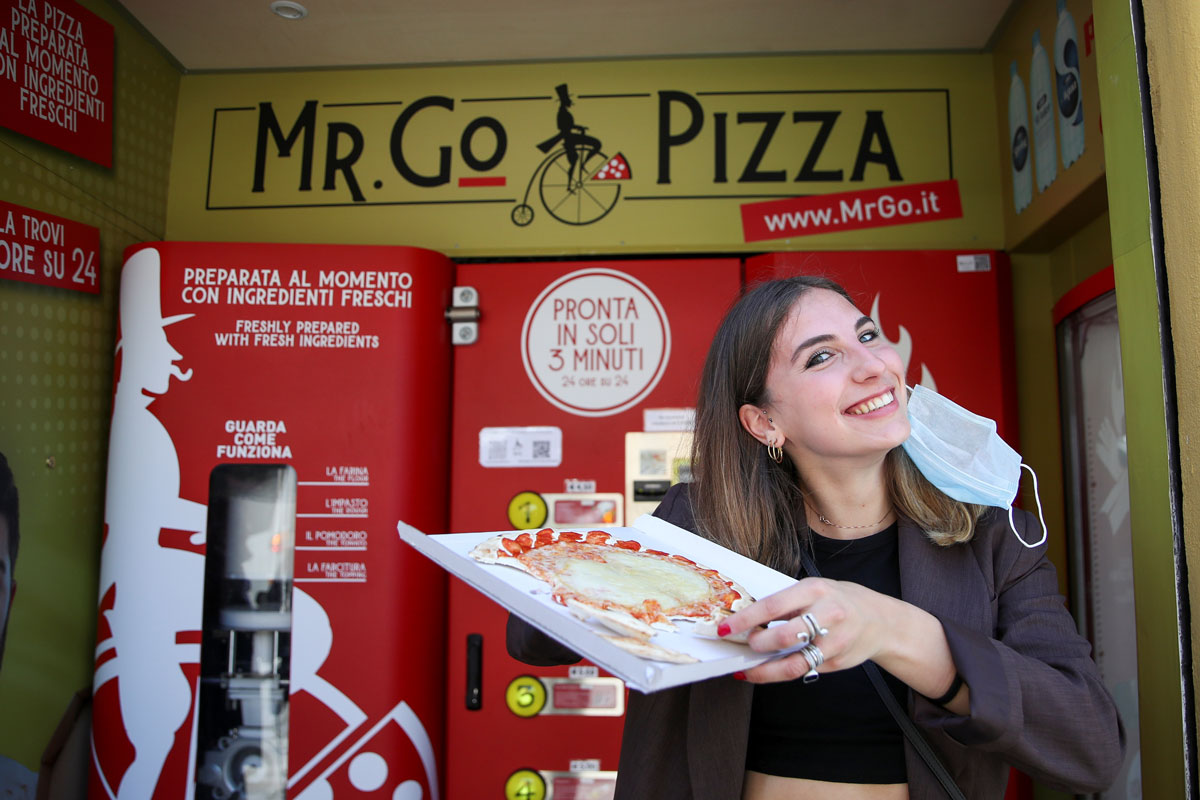 Asking for extra cheese. Not learning a few Italian phrases. Ordering a latte after breakfast.

There are a lot of cultural insults tourists inadvertently fling when wandering the land of pizza and gelato.

But now one Rome based entrepreneur has sparked a debate among locals with his “freshly made” pizza vending machine business.

Some reckon it’s sacrilegious, others are curious to see what pizza made by a machine in three minutes is really like.

As The Guardian reports, “Located in a booth on Via Catania, close to Piazza Bologna in Rome, Mr Go Pizza offers up four varieties, including the classic margherita invented in Naples in 1889, each costing between €4.50 and €6. Customers can watch through a small glass window as the vending machine kneads and tops the dough.”

“It started operating on 6 April and has since sold about 900 pizzas, which are delivered in a box and with cutlery.”

Student Fabrizia Pugliese told DMARGE she was not overly impressed with the machine pizzas.

“So this new invention…I don’t think it’s a good choice for Italian people… We love fresh food and something like pizza cannot be prepared by a machine! Making pizza is art.. it needs practice; love, things that a machine will never have.”

“I think that people here in Rome maybe taste once this ‘pizza’ pushed by curiosity, but it’s a marketing that will have an end very soon.”

Over on Twitter, the reaction has been predictably negative, with Argentines, Canadians and Americans questioning the idea too.

Instagram user @cronopiatw asked her followers if they thought it was “una locura” (crazy).

Another remarked: “Who would buy this in Rome? Even tourists would want the real thing.”

Entrepreneur Massimo Bucolo, who started the business, spoke to The Guardian recently about Mr Go Pizza. His comments go a fair way to answering many of the queries above.

“When I first saw the machine and learned about how it works, I totally fell in love with it,” Bucolo told The Guardian. “And so I did a lot of research and spoke to a lot of food suppliers, ensuring that the ingredients would be of the highest quality. People are mocking the product without even having tried it.”

“I wanted to fill a gap in the market – so many people have called me, especially those who work nightshifts, asking if it’s open as for them this is a real solution if they’re hungry when everything else is closed.”

“The big mistake is thinking that this is an attack against pizza-makers or that it will send them into crisis… Mr Go’s final product is not the same as the pizza they make … it is a cross between a pizza and a piadina [a thin Italian flatbread].”

According to Reuters, early reviews by customers of the machine ranged from “acceptable if you’re in a hurry” to outright horror.

“It looks good but it is much smaller than in a restaurant and there is less topping,” said Claudio Zampiga, a pensioner, Reuters reports.

Reuters also reports that Fabrizia Pugliese, a Naples native and university student in Rome, went a step further, saying the vending machine pizza is ok “but it’s not pizza.”

Gina, a pensioner who declined to give her surname, was even less impressed, according to Reuters.

“Terrible. Pizza really needs to be eaten hot, immediately. This doesn’t work for me.”

Our take as potential visitors? Pizza vending machines are not as bad as Starbucks. In fact, we imagine they are tasty, cheap and convenient. But they are a vibe killer for a city tourists visit, in large part, to soak up the tradition and culture.