Ticks all the boxes. 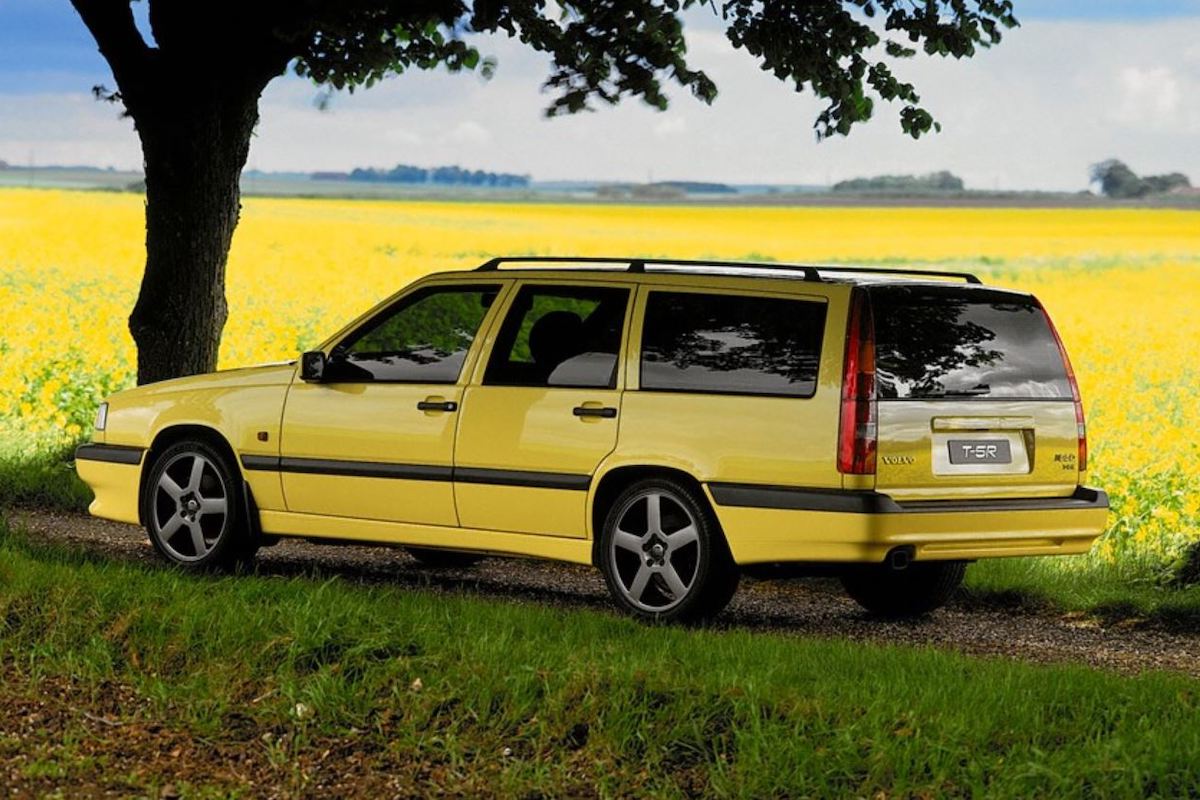 We’re beginning to sound like a broken record at this point, but the Australian second-hand car market is hotter than a Carolina Reaper dipped in molten lava.

While virtually all types of vehicles have been seeing insane speculation, some of the most fierce price rises have been for ‘practical’ vehicles, like vans or 4×4 SUVs. With road trips and off-roading experiencing a huge spike in popularity thanks to travel restrictions, it’s a no brainer: Aussies want capable vehicles that they can fit plenty of stuff in without sacrificing on-road comfort.

Perhaps it’s not surprising, then, that the next big bull rush seems to be favouring fast European station wagons. European cars generally tend to be hit hard by depreciation, but thanks to their unique combination of comfort, performance and style, fast Euro wagons have resisted depreciation better than many other types of cars, and indeed are noticeably on the up right now.

Why Euro? While local manufacturers like Ford and Holden were long champions of the station wagon, fast Aussie wagons are increasingly too expensive for the average buyer. Essentially, the market’s in this weird space where base model Commodores or Falcons aren’t particularly powerful or refined, hence their comparatively low prices, whereas higher spec’ed, more powerful/refined models are wildly too expensive.

Fast Japanese wagons do exist – like the imported Mitsubishi Legnum and Nissan Stagea or hotter variants of the Subaru Liberty – but they lack the same sort of refinement that their European cousins do (plus most have been absolutely thrashed). Anything that attracts the JDM crowd is appropriately expensive, too.

However, fast Euro wagons remain relatively plentiful whilst not outrageously priced… Although that might not last forever. We’ve picked out four models from four different manufacturers that are worthy of your consideration (and investment). 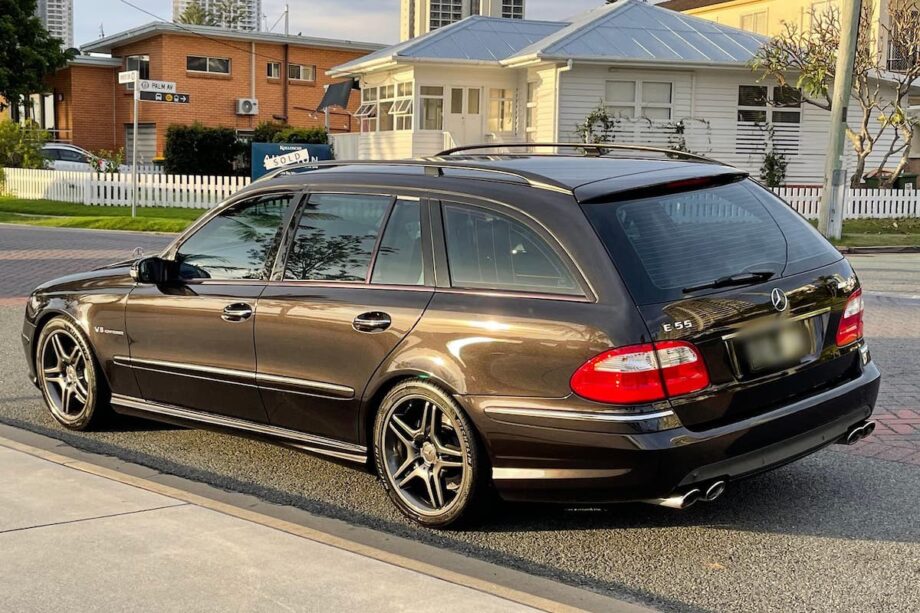 Mercedes-Benz is the oldest car maker in the world, and they make everything from ultra-luxurious limousines like the Mercedes-Maybach S 600 to agricultural vehicles like the Unimog. They’ve also made a few fast wagons over the years – case in point, the second-generation E55 AMG, a variant of the W211 E-Class mid-size executive luxury car.

Produced from 2003 to 2006, the second generation E55 AMG debuted as the fastest production sedan in the world and yes, was offered in an estate version in later model years. Powered by a supercharged 5.4L V8 making a very healthy 350kW and capable of 0-100km/h in 4.8 seconds, the E55 AMG is a helluva lot of car – and it’s a bloody Merc, so it’s comfortable as hell, too.

The E-Class might not be one of the best-known ranges in Mercedes’ expansive lineup, but it’s a rather underrated and versatile machine. It’s big enough to fit multiple adults and all their gear in style, but not as outrageously big (or expensive) as the S-Class. You can actually fit seven people in an E55 AMG… Who needs an SUV?

The example above, listed on Carsales, is a final production year model that has been immaculately maintained. With 160,000kms on the clock, it’s basically mint, aside from some slight interior wear on switches and the like. For $69,500, it’s a bit of a steal – try and find a V8 wagon in such good condition with that few km’s and that level of luxury. Spoiler alert: it’s pretty hard. 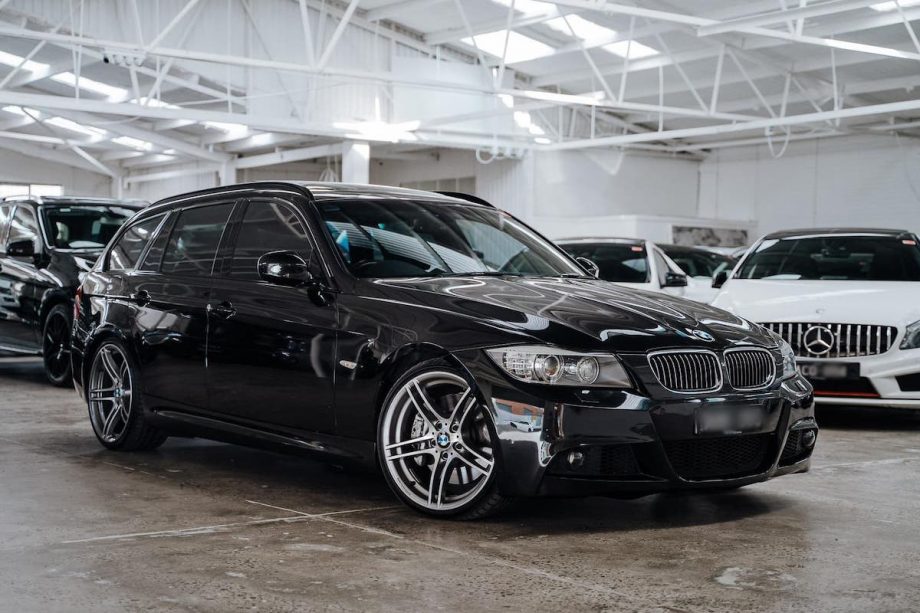 Speaking of lesser-known gems, the E91 335i might be one of the most overlooked BMWs of all time – and definitely something you should be adding to your fast Euro wagon shortlist.

Simply put, the 335i is the hottest non-M3 version of the E91 that was sold in Australia – the US got the 335is, but that was only available as a coupé or convertible. And you couldn’t get an E91 M3 wagon – an estate version of the famous M car has only become a possibility with 2020’s G20 model.

Where the E91 M3 had a naturally-aspirated V8, the 335i boasts a twin-turbo inline-six good for 225kW, which is more than enough for the average grocery run or getting to your kid’s sport on time.

This 2010 example has the later N55 engine, which crucially features solenoid-type injectors, rather than the older N54’s expensive and less reliable piezo injectors. It also has the full M Sport package (check out those saucy 19″ alloy wheels!) A one-owner car, it’s asking just under $50,000. Highly reasonable, all things considered. 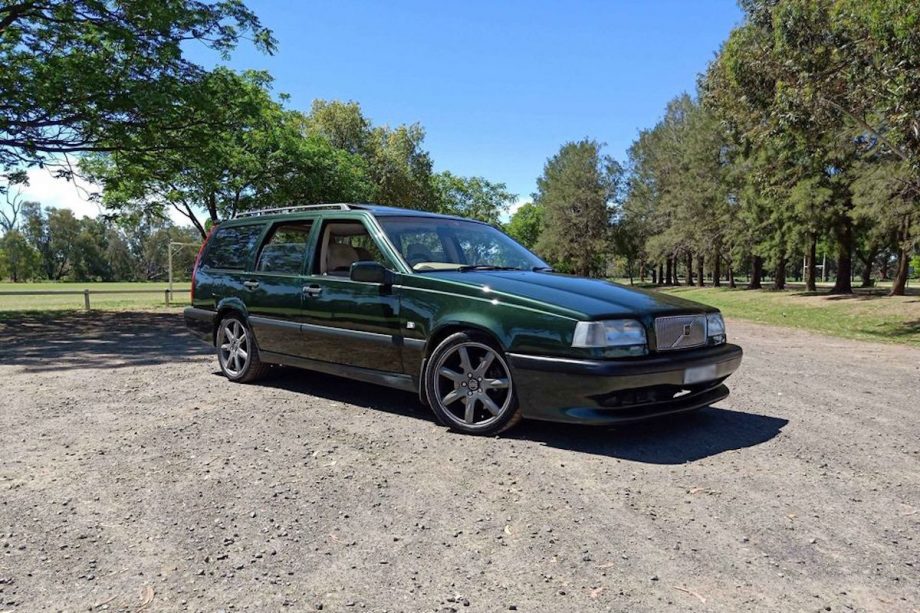 It’s the only non-German entry on our list but we’d be remiss having a discussion about station wagons and not mention Volvo. The Swedish marque is famous for its hardy wagons but it isn’t necessarily the first name that comes to mind when you think ‘fast’. Yet the 850, produced between 1991 and 1996, was a properly peppy car – with two model variants packing extra heat.

All versions of the 850 came with either a 2.0L or 2.5L inline-five (inline-fives sound amazing and produce remarkable performance) but the T-5R and R added a turbocharger into the mix. Available as either a sedan or wagon, these boxy beasts were the ultimate factory sleeper; a characterisation that’s only stronger today. 179kW sent to the rear wheels coupled with that characteristic Volvo refinement and an unmistakable aesthetic make this the performance wagon par excellence for many automotive enthusiasts.

Confusingly, the T-5R came before the R, although there’s not a big difference between the two variants. While the R featured factory bucket seats and a better sound system, only the T-5R was available in that iconic ‘Cream Yellow’. Hilariously, the colour was marketed as ‘Faded Yellow’ in Australia, as Volvo were well aware that the paint wouldn’t hold up well under the harsh Australian sun.

The rarest 850 is the 850 R Manual, which not only featured a beefier transmission compared to the T-5R but a limited-slip differential, larger turbo, heavy-duty clutch and other improvements over the auto or the T-5R, which allowed it to produce 186 kW compared to the auto / T-5R’s 179 kW. There’s also an even rarer all-wheel-drive version of the 850 which boasts the same turbocharged 2.5L that the T-5R and R had, albeit significantly detuned.

The model above is an automatic 850 R in ‘Olive Green Metallic’ we found on Facebook Marketplace. While it’s a little rough around the edges, the owner’s asking only $12,000 for it. Considering good examples regularly go for over $35,000, it’s still a steal – especially considering it wouldn’t take too much to make it shine. Plus, it’s a Volvo – these things are indestructible. 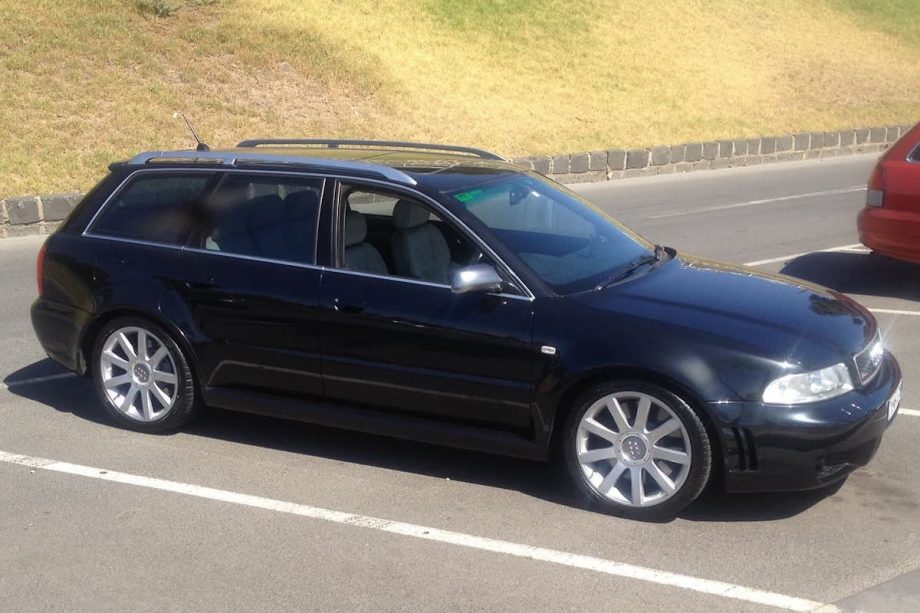 Vorsprung durch Technik and all that: the 2000 Audi RS4. Image: Carsales

Finally, we couldn’t have a list about fast Euro wagons without mentioning the RS4 Avant. Audi is another brand well-known for their station wagons, and the RS4 Avant might just be the best in their stable.

Let’s break it down: the RS4 Avant is the hottest version of the A4. The A4, over the years, has been available as a sedan, wagon, coupé and cabriolet – but the RS4 has only ever been a wagon. (Hence the ‘Avant’ moniker.) You can get an S4 sedan, but not an RS4 sedan, for example.

The 2.7L engine in this first-gen RS4 was developed and manufactured in the UK by Cosworth Technology (famous for their history tuning Fords as well as their Formula One involvement) and makes a tasty 280kW. Aesthetically, the first-gen might be the least assuming, which also makes it perhaps the best – it’s all about that sleeper look!.

For $60,000, it’s not a bad buy – and like the other fast Euro wagons featured here, prices are only going up, especially for well-maintained examples like this one. Don’t get caught with your pants down, is all we’re saying.