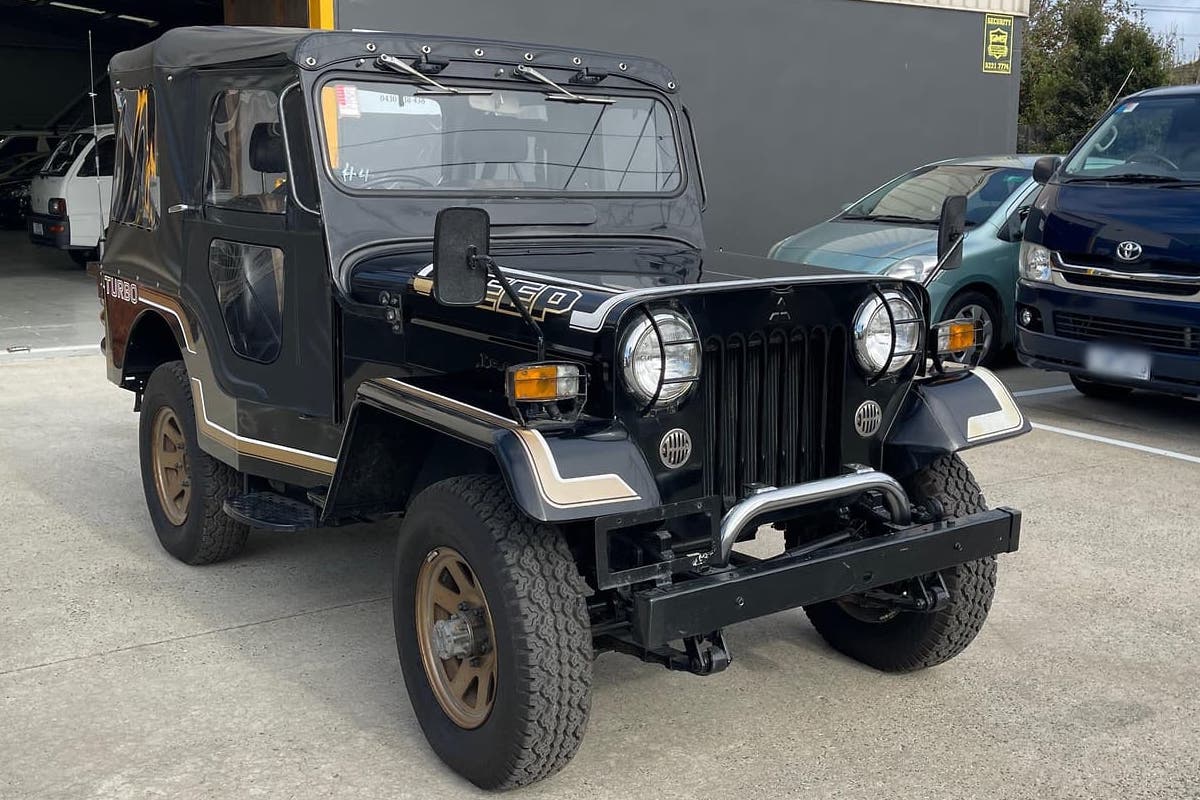 The vehicular equivalent of a sumo wrestler in the WWE: the 1988 Mitsubishi Jeep J53. Image: Carsales

While we think of Jeeps as being quintessentially American vehicles, the reality is that almost from day dot, countries and manufacturers around the world have been producing their own versions of the hardy 4×4.

The French manufactured their own version of the WWII-era Willys MB (the original ‘jeep’) all the way up until the 1980s. Indian auto maker Mahindra continues to produce a model called the Thar to this day, which is nearly indistinguishable from a CJ-6. Jeep Australia even used to make its own version of the CJ-5 locally that boasted a Ford Falcon engine and clutch, and the modern Jeep brand currently manufactures cars in countries as diverse as Brazil, China and Italy as well as in the United States.

Despite being made across the globe, classic Jeeps like the Willys MB and the CJ are rather rare vehicles these days, especially in Australia. So we were quite delighted to discover this absolutely pristine example listed on Carsales by a Victorian dealership.

Sure, it’s got a face only a mother could love, and it’s positively antiquated compared to modern off-roaders, but it’s got a charm all of its own. Indeed, this one’s even more special than usual, as it’s not American or even Australian – it’s actually Japanese.

L: The rear of the J53, with the ‘TURBO’ graphic visible. R: The 2.7 L 4DR5 turbo-diesel inline-four Mitsubishi engine. Two batteries seems like overkill, but whatever. We’re not here to judge.

Back in the day, Japan was a prolific manufacturer of Jeeps – which is somewhat ironic, considering Japan being on the losing side of WWII. Specifically, Mitsubishi manufactured around 200,000 CJs under license between 1953 to 1998 (meaning it long outlasted American production, which wrapped up in 1986). Unlike many international variants of the CJ, ‘Mitsubishi Jeeps’, as they’re known, look virtually identical to the American genuine article – although they’re often quite different under the skin.

This 1988 Mitsubishi Jeep J53 is a dead ringer for an American CJ-5 ‘Golden Eagle’, except for the fact it’s got a big Mitsubishi diamond emblem on its grille. Other details quickly mark it out as something unusual, such as the myriad of Japanese text found throughout the vehicle, the ‘TURBO’ lettering on the side and the fact it’s right-hand drive. Most Jeeps of this vintage in Australia are left-hand drive (and all Willys MBs are left-hand drive too), making this a real novelty and selling point.

The J53 was the final iteration of the Mitsubishi Jeep, and was outfitted with an incredibly hardy 2.7L turbo-diesel inline-four (how distinctly un-American!) good for around 69kW and a truly face-melting 0-100 km/h time of 18.4 seconds. Although you don’t get a vintage Jeep because you think it’s going to win any land-speed records…

L: From the driver’s seat. Do you like the ammo box as a centre console? R: Peep the jump seat in the back.

Otherwise, the J53 is virtually identical to a CJ-3B, apart from the beefier diesel engine (although it must be pointed out that Willys ended production of the CJ-3B in 1968, and by the 80s, CJ-7s were available with more powerful AMC inline-six and V8 options which would handily outperform a J53).

That is to say, it looks fantastically retro, is barebones yet highly functional, and could still match or even best most modern off-roaders. The roof and doors are just vinyl, so they’re completely removable panels – #justjeepthings – and you can also fold down the front windshield, for maximum bug-out potential.

Oh yeah, and because it’s both a vintage Jeep and a Japanese import, you can take this to military shows, classic car meets and JDM gatherings and feel justifiably welcome at all three. It’s also got one hell of a back story, perfect for nerding out and one-upping people in the weird car game. You know, if that’s your thing.

$24,990 buys it, which considering it’s only got 28,704kms on the clock and its pristine condition, is an absolute steal – and a lot cheaper than a Suzuki Jimny if you’re in the market for a cool-looking, compact 4×4. Get on it before we do.